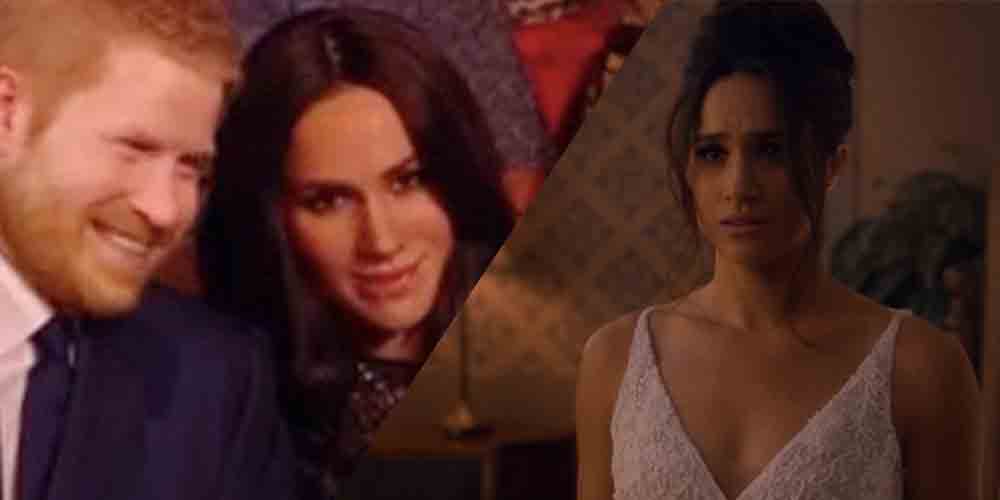 It feels like you can’t look anywhere on the internet these days without there being some kind of conspiracy theory that a celebrity has been replaced with a robot.

It looks like even royalty aren’t exempt from this online trend, as a video of the Duchess of Sussex (aka Meghan Markle) is currently doing the rounds on 4chan as ‘proof’ that she’s been replaced.

This video (along with very odd voiceover) is sending trembles down the spines of every flat-earther/anti-vaxxer/Queen-is-a-lizard-er on the planet. 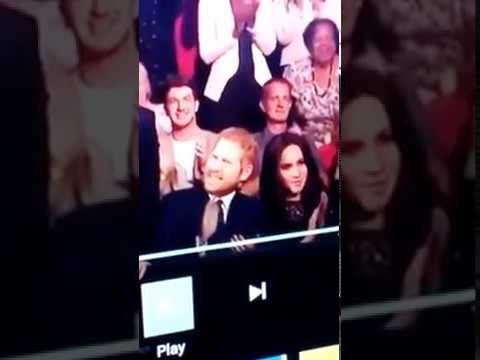 However there’s a perfectly reasonable explanation. That’s not Meghan. And that’s not Harry Either.

The footage was actually taken from the Britain’s Got Talent final, where the ‘Royal couple’ was actually normal people with the pair’s new waxworks on their heads. Yes, that’s wax. They didn’t actually fancy just going to the final.

Watch it again, and it will become painfully clear.

One fan wrote on YouTube: “They did something to her”, while another added: “Prince Harry face isn’t moving either. Nobody is really moving! Check out the ppl in the back. Wth is going on?!”.

“We have chosen Their Royal Likenesses the Duke and Duchess of Sussex for this new innovation.

“Britain’s Got Talent is the perfect moment to show the public a first glimpse of our Live Figures before they make their official arrival in the attraction later this month.”

Ahead of the show, Madame Tussauds London tweeted: “EEK! We have some VERY special guests appearing on @BGT tonight!

“Tune into the live final to see who we’re talking about! #BritainsGotTalent #BGT #MadameTussaudsLondon.”

Another celebrity who has apparently been replaced with a robot is Eminem.

Time to dig a little deeper…

French website, laguiadelvaron, claims: “If we remember, in 2005, Eminem went into rehabilitation for his addiction to sleeping pills.

“So the theory that runs on the Internet suggests that in 2006 (although others say that since 1999) died of an overdose of substances, so it was replaced by a person who looks exactly like him, a clone, even an android, so that the music industry would continue to generate money.”

They’ve also added in some images from a YouTube video that seem to PROVE that he’s a clone. Look! He looks different!

Yeah, I’m not convinced either.

Dropping an album with no prior indication that you’re about to do is nothing new in the music industry, but when Eminem does it, people listen.

Undoubtedly still one of the biggest and most influential names in the music industry the controversial rapper dropped Kamikaze without warning earlier this year and sent fans into meltdown.

It came only a year after Eminem released Revival last year and features ‘Venom’ which features on the soundtrack for the Marvel film.

Fans have compared the record to an era when the rapper was arguably in his prime.

Eminem also seemingly paid tribute to the Beastie Boys with his album cover, replicating their iconic License to Ill artwork.

Eminem honors the Beastie Boys. His new “Kamikaze” album cover is an ode to the group’s classic album, “Licensed to Ill,” which dropped in 1986. It also contained 13 songs and hidden messages in the text. pic.twitter.com/87rI8VRRd9

There’s a number of impressive writing credits on the record too, with Kendrick Lamar, Bon Iver and Little Dragon and was executive produced by Dr Dre.

Kamikaze is available to stream now.

If you’re in the mood for more conspiracy theories, here’s a whole load of them.

There are some, slightly weird, conspiracy theories that become part of the culture.

Elvis is still alive somewhere in Cuba and/or the moon. The illuminati control the world, with a council including Beyonce and Ellen Degeneres. Yet there are some theories that are so mental that they’re just hilarious.

Forget “America never landed on the moon,” we’ve moved on. Now it’s got to that the point where conspiracy theorists are refusing to believe it exists at all. David Ike, the author of other theories including “The Queen is a lizard,” says that the moon “by physics, shouldn’t be there” quoting scientist Irwin Shaprio, who said “the best explanation for the moon is observational error – the moon doesn’t exist.”

There are two separate theories that popped up around secret Beatles records. It’s a fanciful, romantic myth that is very easy to buy into. Initially, a 1976 release from an unknown band was rumoured to be a lost Bealtes record; the links were tenous but believable: same record company, anonymous band members, some similar song titles – but it was proven false when the band came forward. In 2009, a website sprang up advertising a cassette filled with a non-officially released Beatles record, complete with crazy story about how the owner came into possession of such. It turned out to just be some mashups, but still!

The forty-fifth President of the United States of America has a fake wife. That, at least, is the central conceit of the Fake Melania theory. At an event in October 2017, President Trump was seen alongside – apparently – his wife, Melania. However, according to Twitter, it didn’t look enough like her, buried beneath thick dark sunglasses. After intense speculation, the Trump administration offered a statement condemning the theory.

The second theory on the list which relates to 45, this one is a conspiracy theory that the President himself endorsed.

The idea is that the American government is run by a secret inner-group, the deep state. The theory is commonly espoused by alt-right figures such as Steve Bannon and Sean Hannity, thought it has also been used to excuse President Obama’s lack of success in securing his campaign promises relating to the Afghanistan war and Guantanamo Bay.

Celebrity components of the flat earth theory include one hit wonder rapper B.o.B, Freddie Flintoff and Tia Tequila. Insane. Despite having millions of pounds and aides at their disposal each of these celebs genuinely wonder how the rest of us can so blindly think that  the earth is a globe.

5. Barack Obama is the antichrist

A 2013 poll said that one in four Americans genuinely believe that their (at the time) president was the literal, biblical, anti-Christ. The theory was based upon a faked portion of the bible in a chain email sent around during the 2008 election comparing various qualities of the Anti-Christ to ones Obama shared.

The false history, or Phantom Time Hypothesis, is a historical conspiracy theory by German theorist Heribert Illig, stating that Pope Sylvester II and the Holy Roman Emperor Otto II fabricated and altered the Anno Domini calendar to place themselves in the year 1000.  Published in 1991, the theory (surprisingly) seemed to have a fair few seemingly relevant points: a lack of archaeological evidence that can be linked to AD 614-911, supposed Romanesque architecture that predates the time period – but the theory is criticised by historians as not lining up to astrological movements and not fitting with world history.

When the Coca Cola Company released New Coke in 1985, it was merely a re-formulation of the popular drink, something we often see these days in a bid to make drinks healthier. However, the re-do went completely wrong, and Coca Cola Company re-distributed the original formula, under the name Coca Cola Classic just three months later, which led to the theory that the company had intentionally sabotaged New Coke to create artificial excitement around the continuation of the original product.

2. Bitcoin is thriving because of the government

This is a new theory that sprung up after the Bitcoin explosion of 2017. Whilst the crypto currency emerged into the mainstream in the last twelve months, some are unconvinced it is a natural phenomenon. According to writers such as Michael Pento, the US government are currently helping the bitcoin and similar cryptocurrencies to thrive to build public trust in the concept before crushing them and replacing with a state-sanctioned online currency, which would 100% replace the physical dollar.

Former British Prime Minister was secretly a Soviet infiltrator. The theory was a long-term concern raised by people ranging from Soviet defectors to the former head of MI5, Peter Wright. Czechoslovakian defectors would allege that the Labour Party had “almost certainly” been infiltrated by the Russians, and the allegations were taken seriously enough to lead to a full-scale MI5 investigation into the PM, though it would be proven false.