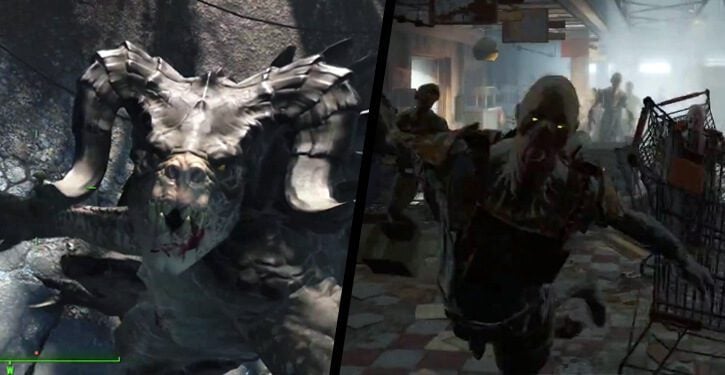 We’re all gamers here, being pitted against overpowered, oversized creatures isn’t something we are necessarily new to. However  their exist enemies, of a particular kind, that manages to challenge us more than we signed up for.

Fallout 4 is no different and also has it fair share of such enemy types that pose a real challenge to even the most battle hardened among us.

Let’s take a look (Warning – This article might contain minor plot and character spoilers so if you’re yet to start the game, it’s best you skip reading this one) –

In comparison to the previous Fallout entries, feral ghouls in Fallout 4 underwent a re-skin, making them look and move more zombie like. They’re faster than before and deal bonus radiation damage as well as base physical damage, chipping down at your health bar twice as fast with the stacking rads intake.

What makes them formidable is their tendencies to fight in groups, it’s a quite a rarity to encounter a couple at a time rather than a huge group. This leads to a quick death for unaware players, ghouls will relentlessly attack, charging towards you as one. Not to mention the variants of the ghouls, especially the ‘glowing one’ which not only is stronger than other ghouls, but can forcibly remove radiation from their body, emitting a wave of radiation and re-animating the corpses of fallen ghouls.

While not necessarily hard to kill, players should be aware of their surroundings and listening out for ghouls as they can crawl out from vents, rubble and sometimes even play dead.

A sentry bot will be a tough fight, regardless of your level and weapons due to the sheer amount of damage these guys can sponge.

Heavily armored and even more armed, the sentry bot comes complete with dual miniguns that will rip through your health bar if you don’t swiftly find cover. The Fallout equivalent of a tank, they tower over your player in stature and are surprisingly fast.

While they’re formidable foes, the sentry bot has but one weakness, prolonged fighting will cause it to overheat, revealing its weak point for a few hits in VATS mode.

Don’t try to act smart with a sentry bot, if you manage to disable both of their weapons, a self destruct sequence will initiate, giving you a few seconds to escape an explosion roughly on par with a mini nuke.

The first giant of a species on the list, The Mirelurk Queen will make its first appearance during the battle for the castle for the Minutemen questline.

Taking a lot of players by surprise, it comes out of nowhere and starts a full frontal assault on the remaining survivors of the fight. One of the most challenging parts of the game due to the fact you’re low on ammo and Stimpacks after the bout, the Mirelurk queen can make short work of you.

With a very powerful melee attack and a ranged attack that causes both radiation and poisoning and the ability to spawn in baby Mirelurks, was it ever going to be easy?

In this fight VATS is your friend and only lifeline, misplaced shots will simply bounce off its hard shell and do little damage, so precision is the only way. Or alternatively you could call upon the Fat Man, if you want to be cheap about it.

We continue our discussion about the most annoying Fallout 4 enemies that we’ve ever come across.

What makes the Coursers so deadly is the fact it’s like fighting any other human opponent, there are no real weaknesses, no opportune moments to strike.

All tactics go out of the window and it becomes a fight of ‘who’s got the biggest gun’ or ‘who can pull off the better critical hit’. These guys were built for combat, so it’s not much of a surprise they will put you six foot under without so much of batting an eyelid. Coursers have a high damage resistance to match their high damage output along with freedom to use Stimpaks.

Due to this the best method of combat would be to concentrate fire, try not to give them any breathing room or you will be forced to chip away at that health bar once more.

“Hey Swan Lake is cool, I love it there” said no-one ever.

Super Mutant Behemoths, well the clue is in the name. These guys are hulking masses of human hating power. With their gloriously overpowered melee attack these brutes will not stop until you’re a mushy red paste. As soon as a behemoth spots you, be ready for the unrelenting charge. Pull out the big guns and start backtracking.

Facing these guys head on is suicide, try drop a surprise attack on them from a distance, preferably a .50 sniper rifle if you want to do some damage, or just simply avoid it altogether and save yourself some time.

It shouldn’t be a surprise that the Deathclaws appear on the list. A nightmare for low levels and still challenging for more experienced players, one single Deathclaw can tear you to pieces.

Donning natural armor, your weapon damage output will dramatically drop, meaning for an effective shot you’ll have to target the soft underbelly, which takes expert timing or a high level of agility to pull off.

Deathclaws are unbelievably fast so fighting at a range will soon become close quarters, going toe to toe with them is also a huge risk as they posses the ability to instantly kill players with a grab move, granted you aren’t wearing power armor. On some occasions Deathclaws can even flip and throw cars at players, which is always a fun way to die.

The best bet of defeating a Deathclaw would be to (as mentioned before) attack the underbelly when possible. This requires you to wait until the Deathclaw is about to attack as when it is running on all fours the belly is well guarded, so it’s always a gamble. If possible, suit up in power armor as it will dampen the damage from its onslaught.

These were our picks of the deadliest creatures in the Commonwealth, have we missed one you think deserves to be on the list? Let us know in the comments section.