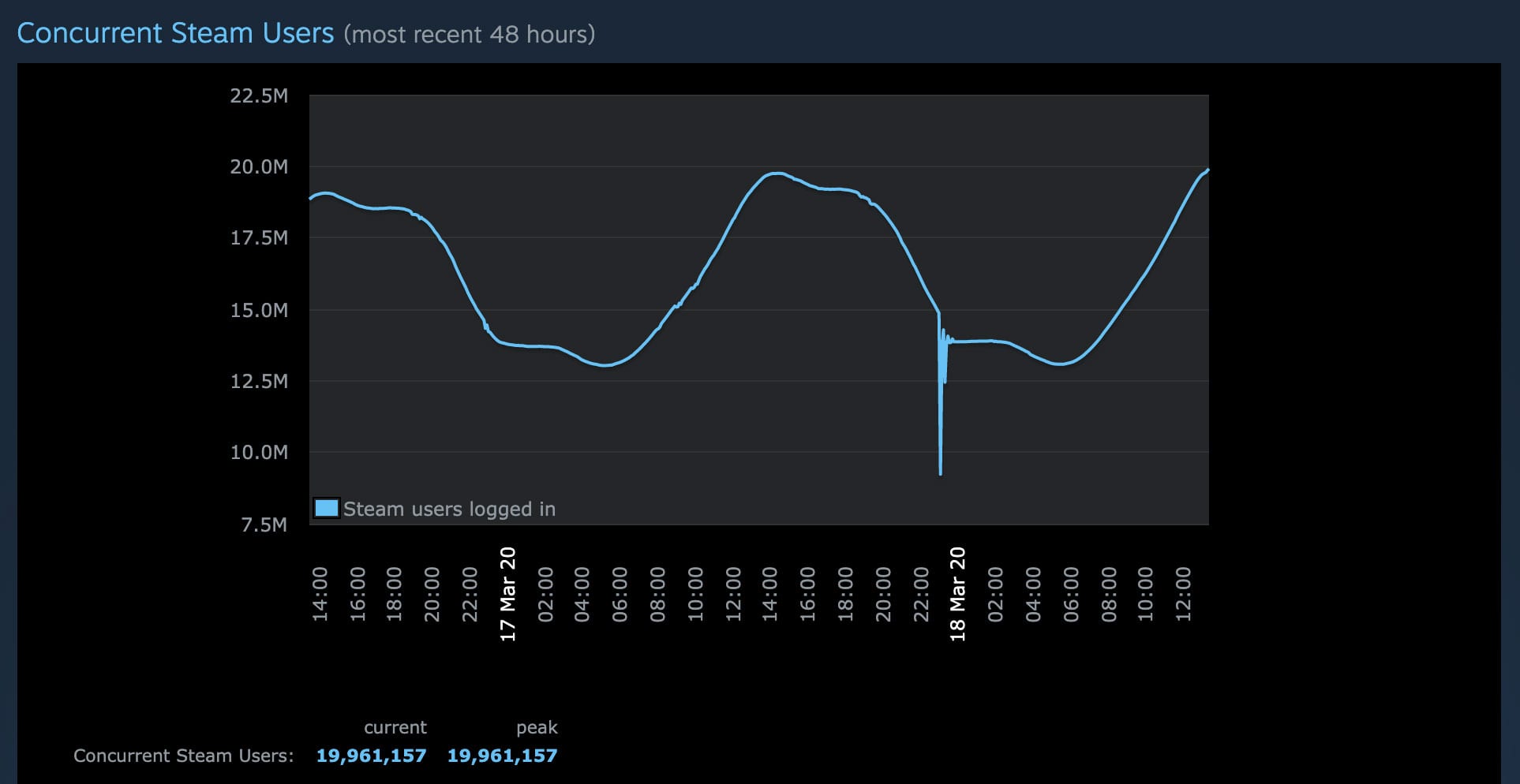 This Monday, Steam logged over 20 million gamers online, smashing through its previous number record. Well, what else are we meant to do whilst we’re all stuck at home because of coronavirus, other than play video games?

The popularity of Counter-Strike: Global Offensive on Steam over the last four months has certainly had an impact on Steam’s active player base. The competitive first person shooter that is CS:GO recently smashed through the one million player mark. It beat its MOBA cousin Dota 2, to set the record for the most concurrent online players ever. It’s managed to break that record AGAIN – 1,023,229 players were logged in to CS:GO all at once, as of last week.

But not everyone is attributing individual games to the success Steam is seeing at the moment. I know us here at FragHero are speculating that the rise of Steam players surely must be attributed to the wider spread of coronavirus, because we for one are certainly spending longer hours on our PCs

And it’s a fair assumption to make. More people than ever are being advised to stay at home if possible. We think there’s no better way to distract yourself from the state of the world at the moment by chilling out and playing some Call of Duty. That’s a stress-free game if we ever saw one.

Besides, CS:GO’s largest spike in players came in February of this year. That’s way before people were told to social distance if possible (officially, we were social distancing ourselves with games before it was cool).

What Video Games Are The Most Popular During the Coronavirus Pandemic?

CS:GO is leading the way for the record number of players on Steam. But there’s a bunch of other popular titles at the moment as well! Unsurprisingly, Grand Theft Auto 5 is still up there, as is the action RPG Path of Exile. Rainbow Six Siege also broke its concurrent player count last week, reaching a total of 196,352 players.

Whilst coronavirus is an awful disease, Valve has managed to do alright for itself with all the extra time people have now. And, whilst we’d obviously rather people be healthy and safe, it does seem likely that games will produce extra content for fans. And it’s always great to feel a sense of community within the games industry in times of need.

There have been no end of negatives, such as cancellations of showcases that indie devs rely on for much-needed exposure. But there’s also been lots of positives. Discord has relaxed streaming limits during the outbreak. Gamers are even donating their unused GPU and CPU computing power to fight against Coronavirus (and several other illnesses, like Cancer, Parkinson’s, etc).

Nobody knows whether or not Steam’s rise in numbers will carry on. Nor do we know how long the coronavirus will continue to spread. But it’s clear to us that continued quarantine and social isolation across the globe is a golden opportunity to finally catch up on all the games you’ve not had a chance to, like Plague.inc. What a ‘Novel’ concept!