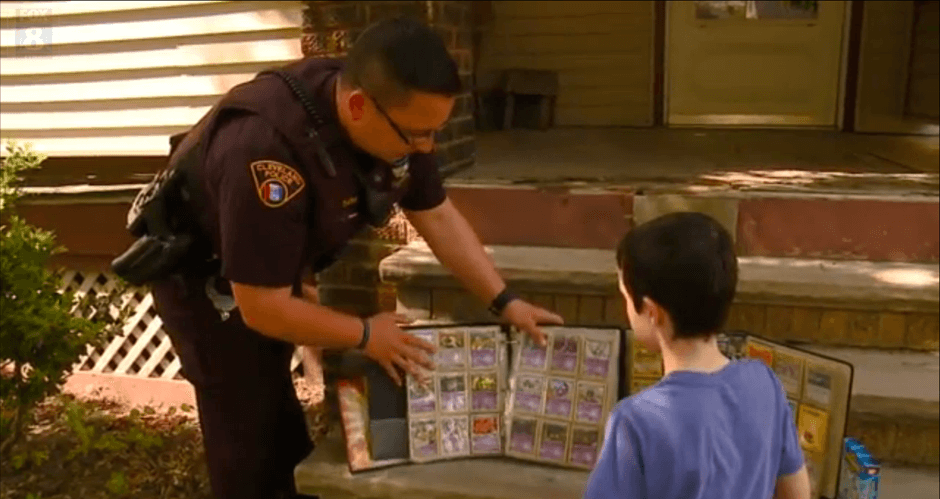 With every wrong doing there’s a right. The world loves to balance everything out in one way or another and as of late that happened when 9 year old boy, Bryce, was stripped of his Pokemon card collection.

Crime comes in all sizes and shapes, and no matter how heinous one is, it’s still an injustice to the victim at hand. The boy in blue really demonstrated a heartwarming passion for justice.

“These cards I had around since I was about six,” Bryce said proudly

The collection meant everything to Bryce, ever since he began trading them with friends.

“They told me that Pokemon is a huge thing and they showed me their cards, gave me a few and that’s how I started out my collection,” said Bryce.

Bryce was walking to his friend’s house, when a thief ran right past Bryce grabbing the collection from him. Bryce says he was devastated as his treasured collection was gone in an instant.

“Then my mom called the cops and they showed up,” Bryce said.

Cleveland police officers James Grotenrath and Ken Kirk showed up to investigate. With the aid of the neighborhood kids, the binder was recovered. Unfortunately, some of the cards were gone.

“I grew up with Pokemon. I loved Pokemon as a kid, and I would be heartbroken too if my cards were taken from me,” Grotenrath said.

Officer Grotenrath said after his shift, that he went home, checked through his old collection and returned to hand over his collection to Bryce. The 26-year old and two-year Cleveland police veteran surprised Bryce.

“It’s a banned card of Pokemon, and there’s only about 10 of these in the world, and I have one of them,” explained Bryce.

“It’s a priceless item, but it’s better to see someone else smile, and in my book, like my partner says, it’s just happy to see a citizen smile instead of always frowning upon us and looking the other way,” said Grotenrath. (Good guy Grotenrath)

As trivial as this story may seem, it’s always worth something to show people that there is some good in the world and not only report on misfortune. Below is a video showcasing the event and the sacrifice of the officer’s own card collection.