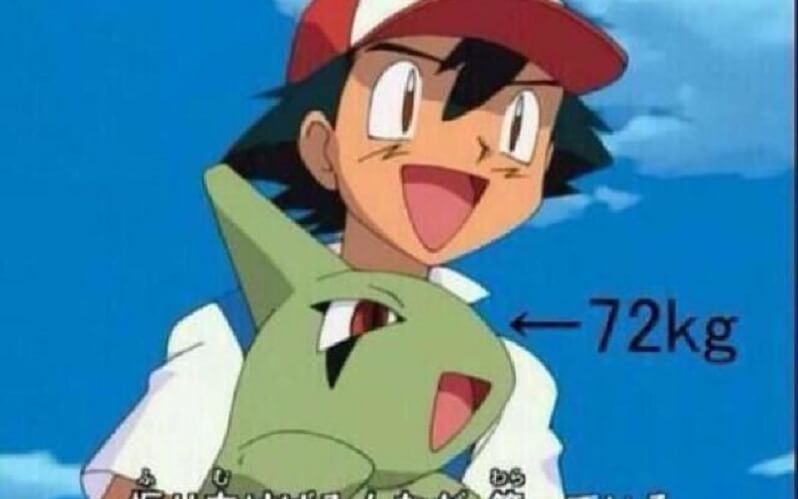 Ash Ketchum might not be very successful as a Pokemon Trainer but he definitely has some muscle power.

We have seen the physical strength of the everlasting ten-year-old kid already in the Pokemon anime series many times already. Today, we have decided to collect a few images from various sources to prove that Ash has some serious muscle power.

In this image, Ash can be seen picking up Pignite very easily. It weighs around 55.5 kilograms (122 pounds).

Larvitar, which weighs 72 kilograms (158 pounds) is an easy lift for Ash. He’s all smiles.

Here, Ash can be seen climbing up a cliff by holding both Pikachu and Hippopotas together. Their combined weight is 55.5 kilograms with Hippopotas’ and Pikachu’s weight being 49.5 kilograms (109 pounds) and 6 kilograms (13 pounds) respectively.

This picture shows both Pikachu and Froakie being seated on both the shoulders of Ash. Froakie weighs around 7 kilograms (15.4 pounds) while the weight of Pikachu is 6 kilograms (13 pounds)

On the other hand, other Pokemon trainers apart from Ash are also pretty strong. In the image below, Pokemon performer Serena can be seen with Sylveon who weighs 23.5 kilograms. Sylveon is actually walking up Serena’s arm.

Here, Serena can be seen holding both Pancham and Fennekin who weigh 8 kilograms (17.6 pounds) and 9.4 kilograms (20.7 pounds) respectively.

Another aspiring trainer, Bonnie, who couldn’t be more than 8 years old, also has impressive strength for her age. She can be seen holding Dedenne, who weighs 2.2 kilograms (4.9 pounds), and Core Zygarde, whose weight is not known.

They might definitely done some weight training before becoming Pokemon trainers (Thanks, Kotaku).