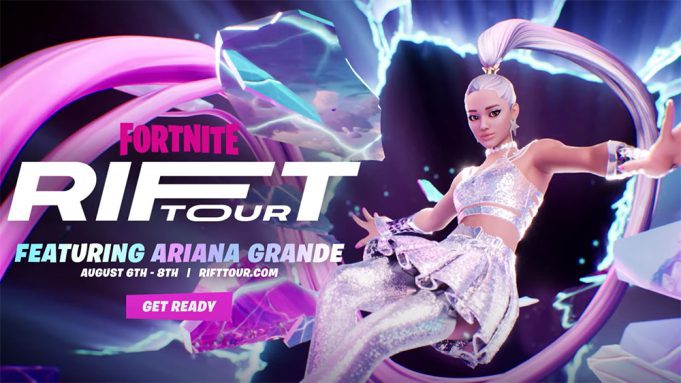 After Travis Scott went Astro, Ariana Grande is the next music star to host their own virtual concert in Fortnite.

Fortnite is an adaptable game. With events ranging from map explosions to in-game Christopher Nolan screenings, it has always found new ways to keep its audience engaged. After the astronomical virtual gig from Travis Scott, Ariana Grande will host her own later this week.

Between August 6th and 8th, players will be able to tune into the Rift Tour. A brief teaser showed off some flashy visuals, which undoubtedly take the form of a very tall Grande, stunning vistas, and a bunch of players thrown around the virtual stage.

Travis Scott’s “Astronomical” tour, which launched in April 2020, garnered up an impressive 12.3 million concurrent players. Fortnite will likely have its sights set on a number even higher than that for Grande’s virtual performance.

The tour will span five showings across three days, with the first kicking off on Friday, August 6th at 6 PM ET – meaning 11 PM for British players. Luckily there are some earlier times across the weekend.

Epic Games recommend that players log in an hour before the event, with the live stream servers kicking off 30 minutes before the start.

Players logging in between now and the final performance will be in for some limited-time rewards, including loading screens, emoticons and sprays. For those just showing up for the Rift Tour, a Cuddly Cloudcruiser commemorative Umbrella will be rewarded.

I’m not even a big Fortnite fan, but the virtual concerts have urged me to reinstall the battle royale, to simply experience the live event with others. Virtual in-game concerts are a very new thing, in light of the COVID-19 pandemic, however, they are genuine fun.

Grande’s Rift Tour, on top of Scott’s Astronomical Tour, show the mainstream pull of video games, so it’s great to see it celebrated in any fashion.

You can find the full details of the upcoming concert over on Fortnite’s news post. The Rift Tour featuring Ariana Grande will broadcast between August 6th and 8th on PlayStation 4, PlayStation 5, Xbox One, Xbox Series X|S, Nintendo Switch, Android and PC.

Are you planning to attend? Let us know over on our social channels!