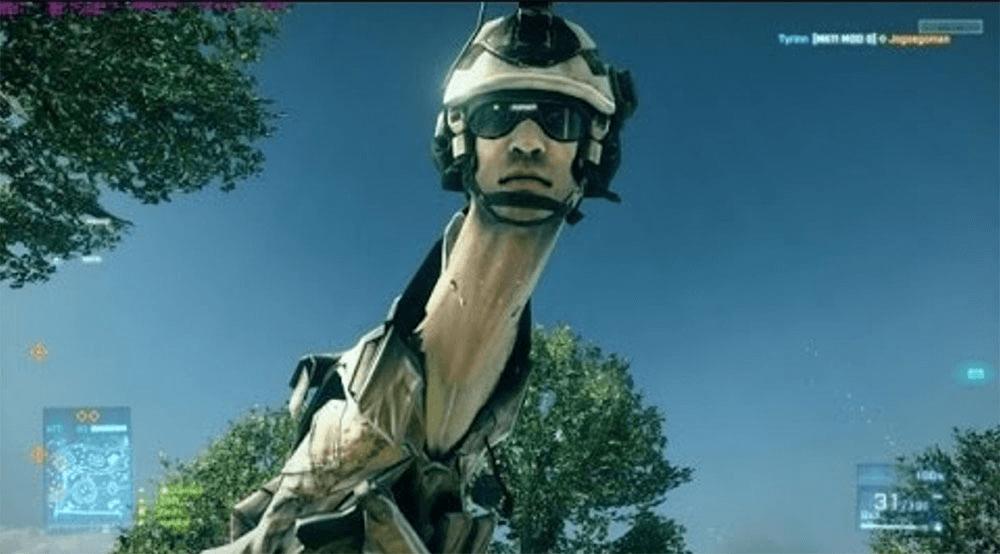 Even the most careful of game coders are going to inadvertently include some glitches every now and then, usually it has a lot to do with budget constrains and racing to get the latest titles out. Sometimes, there’s just no explanation at all. We’ve rounded up ten of the weirdest, worst, and downright creepiest game glitches found throughout the history of gaming.

We’re only going to include one glitch per game to keep things fresh (Except Skyrim, because there were just too many to choose from), and the criteria is basically anything that’s completely absurd, game-breaking, or just cool/interesting.

Most people who have ever played Pokemon Red or Blue are well-aware of the various MissingNO glitches. The easiest one is “the old man glitch”, and it involves Cinnabar Island, flying, and an old man in Viridian city.

From encountering a MissingNO Pokemon, to having clones of yourself fill the screen, this glitch dates back to before everyone had the internet at home and in their pockets, so legend of MissingNO spread from kid to kid, one recess at a time.

This glitch showed up after tripping a pressure plate, when all of a sudden this poor pup got impaled. Not cool. On the plus side, he doesn’t seem to mind all that much, he’s probabally just thinking about squirrels.

The famous Flying Mammoth glitch from Skyrim is self-explanatory. These Woolly Mammoths are sent flying through the sky. Skyrim has no shortage of great glitches, but it’s hard to top seeing this prehistoric beast 200 feet above ground.

7. “Then I’m Taking Windows With Me!” –  Pool of Radiance: Ruins of Myth Drannor

This wasn’t the most well received game of all time, and this 2001 PC title had a mean streak, too. If you played it, didn’t really like it, then went to free up some harddrive space by deleting it (before installing a later patch that fixed the issue), you were in for a rude awakening when it took certain Windows system files with it.

Many games are bad, most aren’t this spiteful though. The game hit the top of best-seller lists, but quickly fell off as people started returning it.

The Sims is a popular life-simulator, played by people of all ages, mostly on the younger side. If there’s anything that’ll discourage younger people from having children at a young age, it’s seeing these weird demonic creatures that can glitch their way out of babies and kids in the Sims.

There are plenty of weird glitches in the Sims, but this one takes the cake for overall creepiness and probabally turning at least a few children into tortured artists, contemplating the deeper meaning of their strange demon-puppeteers that only some people can see.

On the Wii version of Twilight Princess, there is a game-ruining bug. If you’re getting tired of the levity of these previous glitches, this one’s just plain sad. In the Big Cannon Room, you’ve GOT TO talk to a guy named Shad BEFORE you save and quit, because if you leave before talking to him, he won’t be there when you reload the game and you’ll be stuck in that room, completely SOL.

You can mail in your defective disc to Nintendo and they’ll send you back a fixed version, which doesn’t help you if you’ve already encountered the glitch. If you were previously aware of it, you wouldn’t make the mistake in the first place, so it’s kind of irrelevant.

Another series with no shortage of glitches to choose from is EA’s NHL. Being able to check an opponent into the stands is just fun, unlike some of the game-breaking bugs from a decade earlier that would allow you to score very easily on nearly every shot.

This particular glitch got a lot of attention, even prompting EA to release a parody video showing motion-tracking devices setup on a real-life person as he flew over the boards.

Minus World is a glitched version of level 2-2, except in this version of the level there’s no beating it and it’s displayed as level -1. You can’t win. You just swim around a bit, until you meet your inevitable and unavoidable demise. This glitch is solely responsible for giving countless kids in the NES generation an existential crisis.

Similar to the demonic kids glitch in The Sims, RDR has their famous Manimals glitch, where animals in the game take the twisted form of humans. Instead of an angry animal charging towards you, it’s a deformed looking person, and it’s just terrifying.

Even weirder is seeing these limp corpses floating through the air, replacing birds.

What a nightmare! Kids popped in this demo disc from PlayStation Underground to get a heads up on all the awesome holiday titles for their wishlist, only to find out that this demo disc was more like a lump of coal than anything. Most glitches are funny, some ruin the game you’re playing, this one was downright malicious to a whole other level. It impacted OTHER games on your Memory Card by formatting it. Merry Christmas, I guess.

One minute you’re enjoying the Viewtiful Joe 2 demo, the next minute you’re watching as hours and hours of gametime disappear. This may have been caused due to the demo attempting to save to the memory card so that you could continue where you left off when you bought the full game.