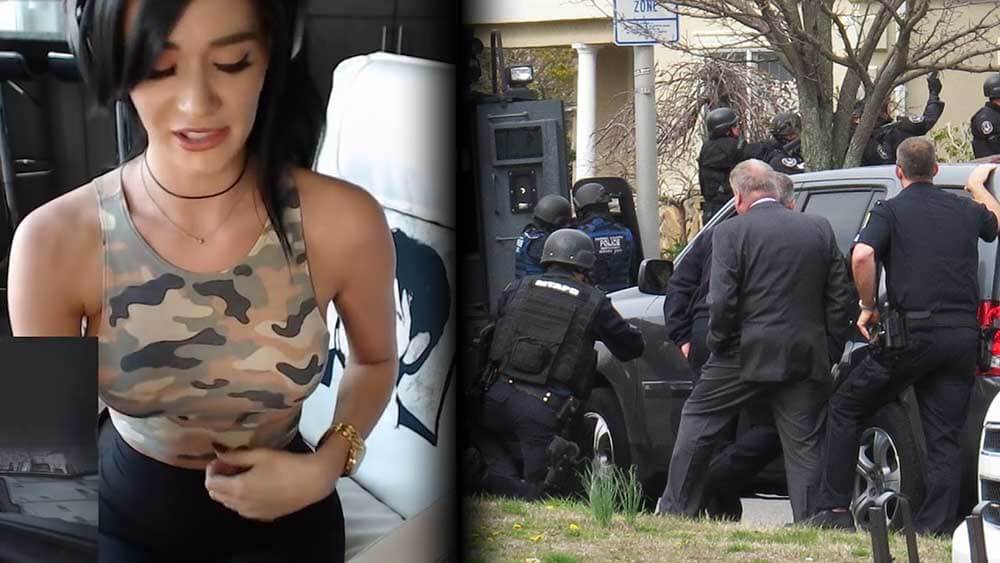 Swatting is one of those trends that went way too far and is now causing all kinds of troubles both for the Police forces involved and the innocent victims. This practice has been associated with online harassment and is often used by Twitch viewers to interrupt gamers’ live streams and give them a good scare. With the mention that we don’t condone these kind of “jokes”, here is our list with 10 innocent gamers who got Swatted live on Camera.

The video where gamer Summit1G gets Swatted shows that this type of “prank” as some call it, does not necessarily have to take place in a house to have the maximum effect, it can also happen in a public place, like a park, for example.

While he was out playing Pokémon GO, Summit1G and his friend got called by a couple of police officers and ordered to stand up and show their hands. It seems that the swatting was carried out by a viewer on the stream who donated and said “Watch the stream in 5 minutes”.

A prank call sent a Swat team bursting through the doors of a Colorado office where The Creatures, a group of streamers, were recording a live match of Counter Strike on Twitch.

The gamer who was Swatted is known as Kootra and he got shaken up pretty badly, being handcuffed, searched and then interrogated. The Swat team received an anonymous tip that hostages were being held in the gamers’ office building and this is why the operation was started.

When the popular League of Legends streamer Gross Gore got Swatted by a police task force, he was so cool with the entire situation that he told the agents to have a sit on the couch while he finished his ranked match. His reaction was in total contrast with the ones we usually get from other innocent players who get swatted, which usually result in a lot of desperate wailing, getting down to the floor, hands at the back and the whole shebang.

The Twitch streamer and speedrunner known as Calebhart42 got swatted after someone called the Police pretending to be him and saying that they were going to do a bad thing.

Because safety is above all, an armed task force was sent to Caleb’s house to find out what violent action was going to take place, but all the officers could do was ask about the nature of the Twitch stream and learn about this horrible swatting meme that resulted in their unnecessary deployment.

This Swatting story is really sad and even though it doesn’t show the exact moment when the task force breached into Joshua Peters’ house, his reaction after the incident is enough to explain just how intense the raid actually was. In the original video, we can hear the gamer’s mother tell him they are being swatted by 10 heavily armed agents who apparently also pointed their guns at Joshua’s little brothers. His reaction video shows us just how harmful Swatting can be.

Mhova is a freelance Texas based model and a Twitch streamer who became even more popular once she got Swatted by a police task force from her home town. The entire mission was streamed live on Twitch and, at first, we can see Mhova going to open the front door, followed by her telling the police that this was just a sick joke and introducing the officers to her fans on the streaming platform.

She is pretty composed about the whole situation, showing the webcam to the officers and telling them “this is the reason you were called to this address”.

ImGoreJess
Yet another female Twitch streamer got Swatted by some viewer who thought that they were going to do a sick joke, but unlike Mhova who got away easily, Jess was shouted at to get on the ground while the Police was searching her house.

When the task force that invaded her house noticed she was live streaming they tried to close the ongoing stream, which they eventually did. Once again, Swatting is no fun and it’s also kind of illegal.

Cloud 9’s CSGO player Jordan “n0thing” Gilbert is yet another famous gamer who couldn’t escape the Swatting trend. It appears that a “benevolent” fan of his decided it would be a good idea to send a fully armed Police task force at n0thing’s home in an attempt to stop him from streaming and search every corner of his room. The interesting fact is that the 19 year old who was the author of this untasteful joke was caught and punished accordingly.

Two Russian Gamers
Two Russian gamers were merrily streaming a video game in their room when a heavy armed SWAT Team stormed into their house. In the clip that was taken from the live recording, we can see some agents that wave their guns at the gamers, ordering them to lay on the floor face down. Since it was first released online, the video gained a lot of popularity and was subjected to an equal amount of speculation towards its authenticity.

Paul “Ice Poseidon” Denino is a Twitch streamer notorious for messing with people and being messed with, getting swatted more than once and starting all kinds of online feuds with other streamers. So, when Ice Poseidon was evacuated from an airplane flight due to a bomb threat alert, his fan base didn’t see this as such a big deal, but for the other people involved and for the local media this was something that deserved a spot on the local news.
Tweet
Share
Share
Pin