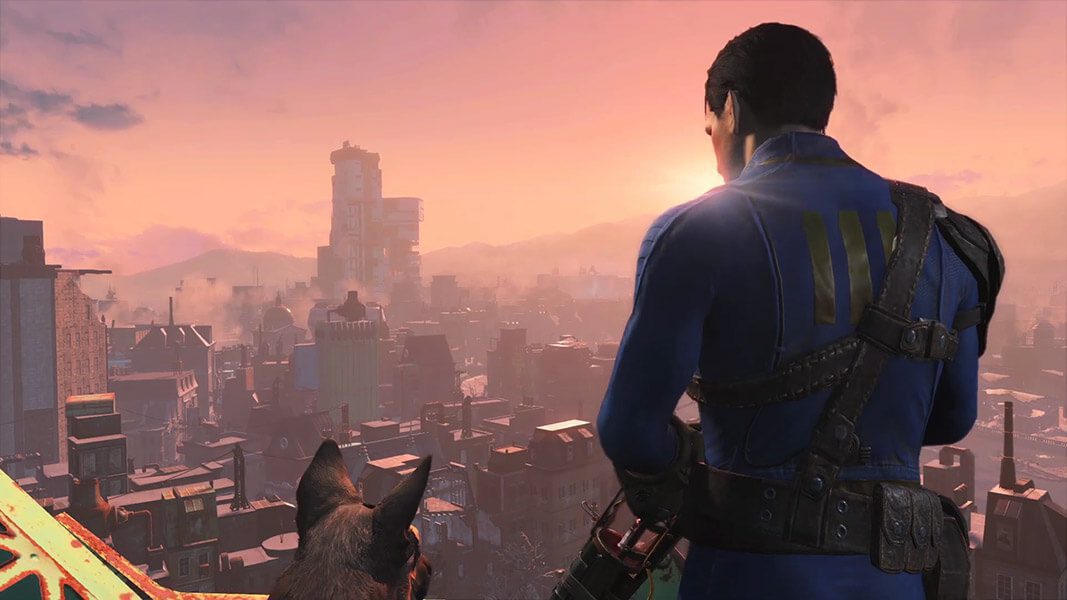 Before we begin, I’d like to mention that this list will not be in order. It would be impossible to make an ordered list of developers. With that said, these are the 10 game developers that we feel have impacted the industry the most, along with created the best games of all time.

Let’s start it off strong. Bethesda’s claim to fame is their incredibly immersive, open-world first or third person games. Their games have a lot of elements that an RPG would have, but stray from that genre a bit, almost creating their own unique style of game.

We’re of course talking about The Elder Scrolls (TES) series and the Fallout franchise. Bethesda’s baby of sorts is TES. They created it and have so far made 5 titles in the main series, along with a spin-off game, Elder Scrolls Online (ESO), developed by ZeniMax Online Studios.

Then there’s Fallout. Todd Howard, game director at Bethesda, said himself that “In the world of entertainment, there’s nothing quite as good… as Fallout”. Those are big words coming from one of the most respected men in the industry, who was also recently awarded the Lifetime Achievement Award by the Game Developers Conference.

Bethesda acquired the Fallout franchise in June of 2004. They then released Fallout 3 in 2008, and Fallout 4 in 2015. It’s undeniable that TES and Fallout are two of gaming’s biggest jewels, which earns BGS a rightful spot as one of the best developers of all time.

Naughty Dog has been in your living room and on your TV screens for longer than you think. Remember Crash Bandicoot as a kid? Naughty Dog made it. How about Jak and Daxter a little later with the PS2? Naughty Dog again.

However, it wasn’t until the PS3 that Naughty Dog really took off. The Uncharted series is golden. Nathan Drake and his pals have been on many amazing journeys. We definitely can’t wait to see Uncharted 4 and where it takes us next.

Perhaps Naughty Dog’s crowning achievement for why it’s cemented in history as one of the greats, is because of The Last of Us. My personal opinion is that The Last of Us is the best game of all time, and it’ll be nearly impossible to top. The stunning environment, the immersive and fun gameplay, all topped off with the story that shook everyone to their core, The Last of Us is a work of art that only comes along once.

I’m in the party that is fully behind a sequel. A lot of people will disagree, but I feel Naughty Dog can do it justice.

One of the most famous, yet infamous names in gaming. Valve really knows how to keep people wanting more. They have many accolades that we can’t get enough of, yet they continue to hold out. And it’s all because they can’t count to 3.

The only exception to this rule is Counter Strike (CS). CS is probably the most competitive FPS franchise around. Counter Strike: Global Offensive (CS:GO) is one of the most played and streamed games ever. It really shows that, while they can’t count to 3, Valve knows what they’re doing when it comes to developing games. We just wish they’d actually develop games.

Name a game franchise more well known the world over than Grand Theft Auto. It’s not an easy task considering how much gamers love it, and how much the media generally hates it. Whatever your feeling on the name, it’s undeniable that it’s one of, if not, the biggest gaming franchise ever.

Take also into consideration the other games Rockstar has made, starting with L.A. Noir. Such a fun concept and really, has there ever been a detective game that put you in the shoes of the investigator better?

How about Red Dead Redemption (RDR)? Yeah yeah, we know it’s not the first title in the series, but RDR is the one that tossed most gamers into the world of the wild west. Again, is there a game that’s ever immersed you into that feeling better?

The moral of the story here is, while other developers can bring you a great game, Rockstar always brings you a great game, no matter the setting. Now if only they were working on a new sequel to Red Dead Redemption…

Ever hear of World of Warcraft (WoW)? Yeah, it’s probably the only game that’s as popular and worldy known as Grand Theft Auto. WoW is quite the game really. People that play it usually end up getting really, REALLY into it. Blizzard has fleshed out the two factions so well that it typically trickles into real life.

The Alliance vs. The Horde is definitely the biggest rivalry in all of gaming. It’s caused real world fights and has started lots of controversy regarding gaming, with people claiming WoW is ‘too addicting’. But isn’t that exactly the point? I’d say Blizzard has done their job if it’s too addicting. Oh, and WoW came out in 2004, and it’s a monthly subscription service, yet it’s still one of the biggest games in the world 12 years later.

Another game Blizzard has created an empire out of is Starcraft. While the original is highly regarded as one of the greats, it’s Starcraft 2 that has garnered the attention of.. well.. entire countries. Yes, in South Korea, Starcraft 2 is an official sport in most schools. On the competitive end, teams of the best players in the will live in the same houses and play Starcraft 2 all day to be ready for major tournaments, with prize pools in the 100’s of thousands of dollars.

It’s impossible to go over all of Blizzard’s accolades in a few paragraphs, but other games they have are Warcraft and Diablo to name a couple. Two household names in the world of gaming. It’s no secret that Blizzard deserves a spot on this list, perhaps more than anyone.

Who’s the most recognizable and famous face in gaming? That little Italian plumber of course! Mario is synonymous with a lot of people, but mainly a lot of childhoods. I grew up in a Nintendo house back in the Sega vs. Nintendo days, so needless to say Mario played a big roll in my early years.

Fun fact about Mario is that there are over 170 games in the franchise. That’s more than any other game character can say. Now sure, a lot of them are spinoffs, since there’s a Mario game in just about every single genre you can think of.

I could go on and on about Mario, but Nintendo has more than a few gaming franchises that span back as far as 15-20 years in the making.

Who hasn’t wielded Link’s sword in the search for Zelda? Who hasn’t hopped across barrels and obsessed over bananas? Who hasn’t set out on their quest in the hopes of catching them all? Nintendo is a game company that has truly inspired an entire generation.

Known for creating an RPG in it’s truest form, Square Enix has three major franchises it’s known for, and you’ve probably played at least one of them. Dragon Quest, Kingdom Hearts, and of course, Final Fantasy.

Dragon Quest is a little hard to follow when you look at it from a development standpoint. In all, it took 7 companies in 1986 to create the first title, Square Enix being one of them. Throughout it’s life, it’s had many developers, but one name was always a constant on the boxart, Square Enix.

Final Fantasy is the big one. With the release of Final Fantasy XV right around the corner, it’s one of gaming’s biggest franchises. Spanning just shy of 30 years, it seems Final Fantasy will never die, and that’s not a bad thing. Oh, and did we mention they have a new movie coming out, featuring actors from Game of Thrones and Breaking Bad?

Most people know From Software for the Souls franchise. Ya know, the games that make you break things every time you play them. If not the Souls games, then you probably know them for their longest running series, Armored Core.

Armored Core has been running for almost 20 years and has 15 titles to show for it, spanning across 6 different consoles. Along with those are the 5 mobile games as well.

Then there’s the rage inducing Souls series. Starting in 2009 with Demon’s Souls, the series took off with international success. After that, Dark Souls was the spiritual successor that released in 2011, with Dark Souls II, and Dark Souls III in 2014 and 2016.

Bloodborne was another game that followed the Souls formula and also garnered lots of success. I don’t think anyone would dispute From Software being on this list as for the past 7 years at least, they’ve created a product that makes you go crazy while playing it, yet you still love every second of.

This small British studio has only developed 4 games. While for most of the past entries, I’ve only talked about a few titles from each, but most of them have a long list of experience under their belts. Rocksteady instead decided they were just going to get it right every single time.

While they have 4 games, only 3 of them are the beloved Batman Series. The first one was for the PS2 and Xbox back in 2006 and it was called Urban Chaos: Riot Response. It garnered a t 73% on Metacritic, which isn’t great, but isn’t terrible either.

Now we move to 2009 when Batman: Arkham Asylum was released. People couldn’t get enough of it and it scored a 91% on Metacritic. No worries, they didn’t stop there though. Moving to 2011, they dropped Arkham City, which nailed a 94% on Metacritic. Remember, this studio consists of 120 people as of Jan 2016, probably less back then, and they’re only 3 games in, yet they’re releasing hits like these? Impressive.

Most recently we saw Arkham Knight on the newest generation of consoles and PC in 2015. It got 86% on Metacritic, which is a bit down, but it was still an amazing game that most people loved. Rocksteady has proven their product is worth your time.

I saved this one for last since it’s not going to be a popular choice, but these companies need to be looked at for their accomplishments. I also grouped them into one because they’ve largely worked together developing Call of Duty over the years.

Infinity Ward is here because of what they did in 2007 by releasing Call of Duty 4: Modern Warfare. It’s hard to find someone that doesn’t enjoy the odd CoD 4 game once in a while, and it’s because this game was so well made that it set the series up for it’s unmatchable success.

So while IW is here for it’s earlier CoD titles, Treyarch is here for consistently giving us a product worth $60. If not for multiplayer, a lot of people will buy Treyarch Call of Duty games for the Zombies mode. Whatever your reason, Treyarch has never disappointed in it’s 4 attempts at the franchise.

The other reason they’re both on this list is because of the actual campaigns that go along with their games, which to me don’t get enough love. Most people loved the Modern Warfare’s campaign for all 3 games. The Black Ops series has also had a fantastic story to go with it that many people seem to overlook.