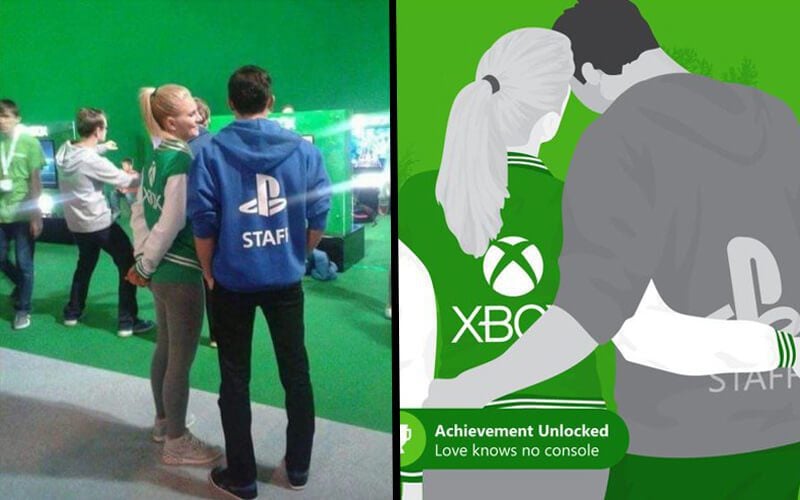 Sony and Microsoft has been fierce rivals for more than a decade now due to both companies having their own consoles in the form of the Xbox and PlayStation.

Spanning multiple generations with the latest iterations being the PlayStation 4 and Xbox One, these companies won’t see eye-to-eye on many occasions. However, love knows no boundaries and even Microsoft has given their nod to it.

A picture went viral on social media late last year which showed a lovey-eyed couple interacting with each other. The catch? They were both volunteers on Xbox and PlayStation booths respectively.

The girl wore an Xbox jumper while the boy was seen wearing one with the PlayStation logo prominently pasted over it. This didn’t stop them to share a cosey moment together though and getting clicked in the process.

Fast forward to present day and a Twitter user named Dave Hinkle, who’s currently the social media manager for games such as XCOM, tweeted this picture to the official Xbox twitter account.

We can bet nobody saw what ensued next coming.

For never was a story of more woe than this of Juliet and her Romeo. pic.twitter.com/Uc1bvtOxnZ

We can bet nobody saw what ensued next coming. The official Xbox account not only responded to Hinkle’s tweet but also came up with an original artwork featuring this cute couple and named an achievement after them called “Love Knows No Console”.

Well, props to Microsoft for having a big enough heart to do such an awesome thing. The ball’s on Sony’s court now, we hope they also acknowledge that both consoles can exist together and gamers can enjoy them both. Microsoft just did that.