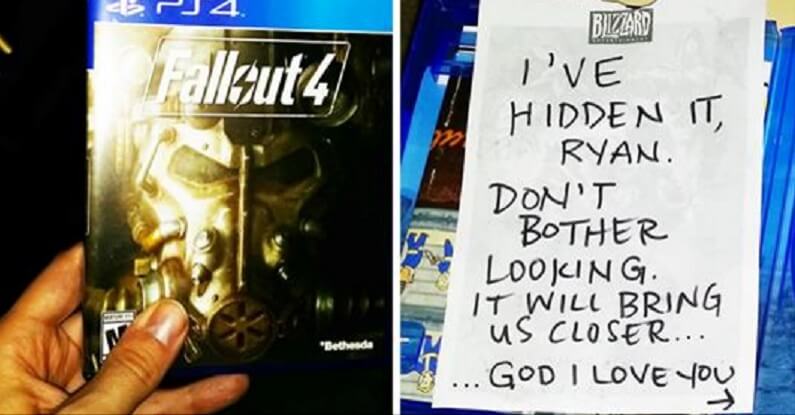 Fallout 4 is one of the best selling games to have come out this year and has taken over the lives of many people, some to a extent, that their near and dear ones are getting annoyed or worse.

However, there are some people who’re chill about the fact that they might be spending less time with their peers for some time thanks to the game.

Than there’s this couple, whose taken things up a few notches. We’re talking about a wife who decided to gift the game to her husband but considering how it will reduce the time they get to spend together, she made sure the husband had to work hard to play the game.

While many would find this to be interesting and a great way to make their bond stronger, some would agree that she was lucky the husband didn’t lose his cool and vented it out on her.

He actually posted an entire collection of images on Imgur. which takes us through the entire ordeal, thanks to his loving yet mischievous better half –

This is what he saw when he came back home. The answer was an obvious YES!

His eyes went up straight to the game rack and he noticed the box of the new blockbuster game Fallout 4.

With all the excitement he got his hands on the game.

He found this message instead of the game.

He was relieved as the message read it was under the mouse pad.

To much of his agony it wasn’t there too.

The wife isn’t someone who hands out free lunch it seems and also has the imagination of Riddle maker as she seems determined to make it very hard for the husband to find the game. The husband also doesn’t seem to be someone who’s ever seen or known how giving up feels like.

The next clue said that the game was in the Blue Ray DVD rack.

He found another note after searching most of the boxes of DVDs.

It indicated that it was in one of the books with a stereo instructions.

Finally, he cracked the codes and found the game.

The husband got to play a real-life mini-game before he could delve in the post-apocalyptic world of Fallout 4. Props to him for being so calm and determined throughout the entire ordeal.

But the real winner is the wife, she definitely looks like a keeper. Not only does she support her husband’s gaming habit but is also playful enough to keep things exciting and interesting for him.