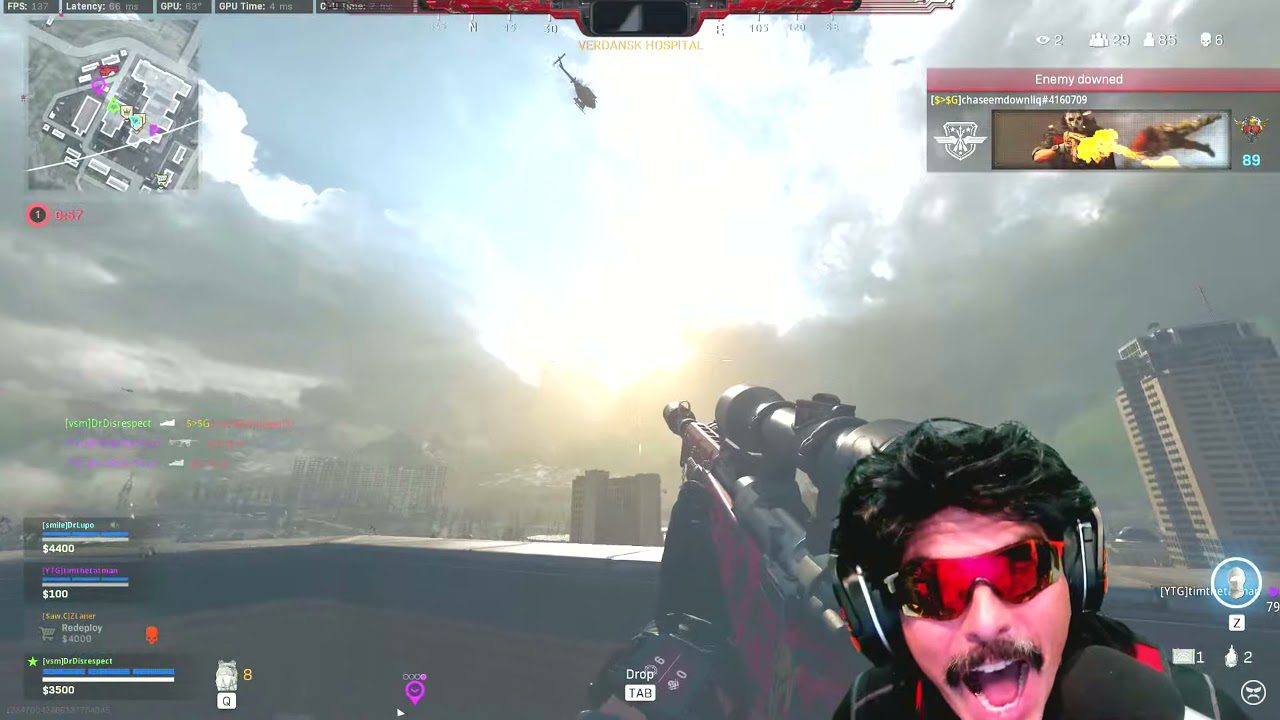 During a livestream this week, Dr DisRespect pulled off a Warzone no-scope that shocked fans and the rest of the team. And honestly, we can’t blame them, just look at this.

Dr DisRespect is known for the violence, speed and momentum that he brings to every game. Fans have regularly witnessed The Doc dominate lobbies in games such as Warzone and Apex Legends. However, in a recent stream DisRespect really outdid himself.

Squadding up with some of the best, ZLaner, TimTheTatman and Dr Lupo joined the Doc for some games of Warzone. And things got spicy, to say the least. Skip to about 3:45 in the video below to check it out those beastly skills for yourself.

Call of Duty Warzone can be a hard game to master. With a constantly shifting meta of weapons, the slightest buff or nerf can throw off your game. However, Dr DisRespect clearly knows his stuff as he hit a no-scope from an incredible distance.

Standing atop the hospital the Doc spotted a enemy helicopter heading his way. With a Felipe marksman rifle in his hand, he quietly composed himself. With the slightest tweak of aim, Doc headshot the pilot and immediately downed them. The shot resulted in an appropriate reaction from both the Doc and ZLaner who was spectating at the time.

Even some of Doc’s teammates couldn’t believe what had happened. “You did not no-scope a helicopter?” asked a shocked TimTheTatman.

The reactions of the team make up part of the amusement of this killer shot. However, many fans were quick to spread the word of Doc’s latest feat. A quick YouTube search will provide you with many copies of the shot with thousands of views.

This ultimate win comes after DisRespect lost his temper during a 1v1 in the Gulag. Doc was so enraged he slammed his fist down on his desk, damaging his greenscreen and breaking his mic. This latest clip will no doubt slot in well with one of Doc’s many skill compilation videos.

What did you think of Dr DisRespect’s insane no-scope? Let us know over on our social channels!