Ubisoft released a short video walkthrough for Child of Light with LEad Programmer Brianna Code explaining the different facets of the 2d turn based RPG. Set in the fantasy world of Lemura, described as a “re-imagining of classic fairy-tales.” You play as Aurura, a pink headed girl who was stolen from her home and quests to return. To do so she must retrieve the sun, moon and stars held captive by the Queen of the Night.

Following in the vein of 2D side scrolling RPGs like Odin’s Sphere you can explore the world, talk to characters, find quests and get into battles. You can use your companion to blind enemies to avoid them in dungeons or confront them and enter a turn based combat screen. The game is structured to be a playable poem.

Child of Light is powered by Ubisoft’s UbiArt Framework engine. The engine lets the seasoned artists and programmers of Ubisoft Montreal bring their game to life by using original concept art to be inserted into the game world. With Child of Light it looks like an interactive watercolor painting. 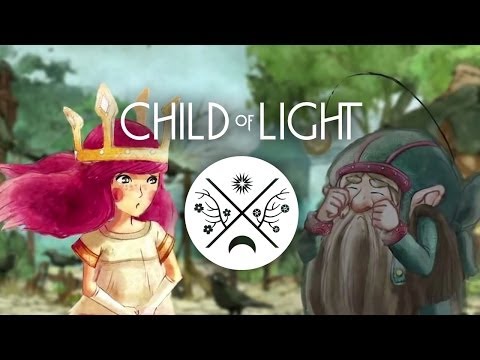 Check out the game’s website for a perfect interactive presentation of what the game will tonally be like. Child of Light will be a downloadable title coming to the PS3, PS4 and all other platforms in 2014.