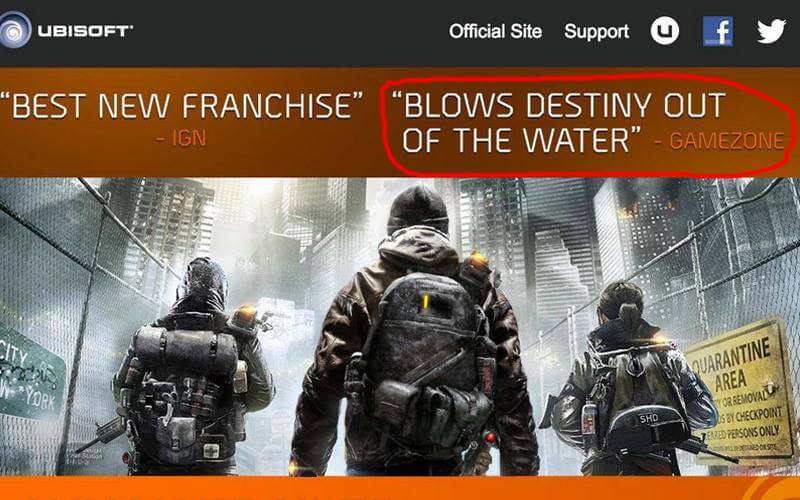 This is quite the hot potato Ubisoft found themselves in. In a recent advertisement for The Division, Ubisoft quoted a gaming website named GameZone, stating the website declared The Division “blows Destiny out of the water”. The big problem here is that GameZone never said that.

The Division is shaping to be a GOTY contestant, so it makes you wonder why Ubisoft would falsify an ad for a game that’s already hyped up. One reason could be that it’s because the two games share a very similar genre. Both are online-only RPG-shooter hybrids. The two games will draw largely the same fanbase.

Now, as for what GameZone actually said. The title of their article that spawned this quote is:

The Division blows Destiny out of the water with 6.4 million beta players

Ubisoft did indeed ask GameZone to use the quote, however they did not specify in what way it would be used. They asked to use the whole quote, but decided to trim it down a bit to better suit their needs.

I’m sure you can see the differences here. GameZone was referring to The Division’s beta, which indeed surpassed that of any beta on record, and beat Destiny’s previous record. They were not referring to the actual gameplay of The Division, and nowhere in the article did they give an opinion as to which game will be better.

This is similar to how the news media will take a snippet of a quote but leave out the rest in order to skew people’s opinions. It’s wrong and something that we should all remember next time we look at a Ubisoft ad.

On a slightly lesser scale, IGN’s quote in that ad was also a snippet from a larger thought. IGN declared The Division as “the best new franchise at E3 2013”. But hey, what’s the difference in Ubisoft’s eyes?