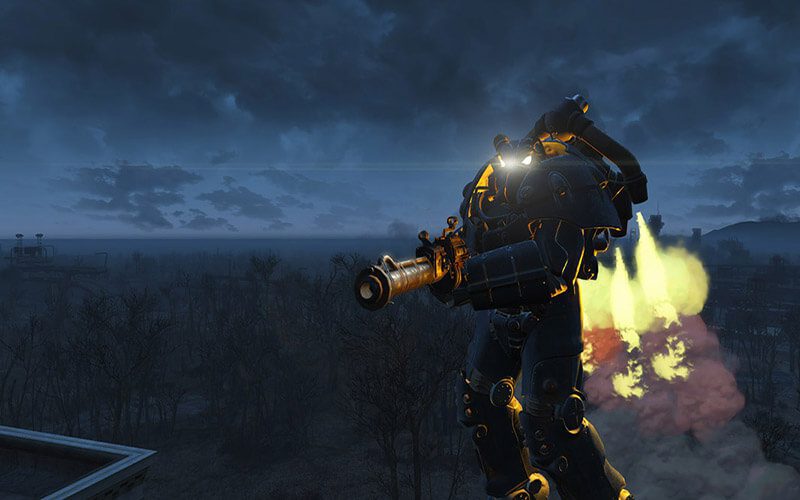 Fallout 4 has plenty of different Power Armors to choose from. From old military pieces, to scraps of metal thrown together over a frame by raiders, power armor is power armor. It gives you insane buffs, allowing you to breath underwater, receive next to zero rads, and take little damage. Every one is a little different from the last, but there’s one that players have been flocking to since the game’s release. The X-01 suit.

The X-01 was actually designed after the Great War, which was the event that led to the nuclear Fallout we all love in the game. It’s interesting that the suit of power armor with the best stats was created post-war. It was remnants of the U.S. military that designed it. Let’s take a look at some images.

As we said, Fallout 4 has plenty of armors to choose from. There’s two others that we’re particularly fond of. One is a classic from Fallout 3, the Winterized T-51 armor. The other is the Raider Power Armor. From Wikipedia, about the T-51 suits:

First seeing service – and inherently, great success – in the Anchorage Reclamation campaign, the T-51 power armor soon became standard issue for the army’s armored infantry regiments. Developed at the West Tek research facility, the T-51 was the peak of pre-War power armor technology. It saw continuous service throughout the Great War, and is thought to be the force that drove the Chinese out of Anchorage.

So clearly, this version of Power Armor has a winterized variant to account for the temperatures of Anchorage. Let’s take a look at a couple images of the Winterized T-51 Power Armor.

So clearly the T-51 has a rich history with the military, but what about the Raider suits? Unfortunately, there’s no history behind them, as they’re just scraps of metal thrown onto a power armor frame. Usually only high ranking Raiders are seen wearing them. Being that they’re not designed well, or built well for that matter, they have the weakest stats of all the power armors. But come on, they look sick.