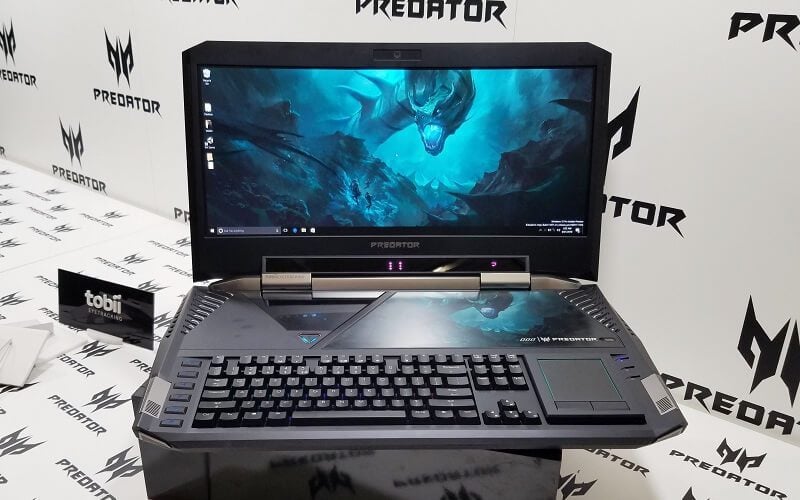 The new Acer Predator 21 X is an extraordinary machine. It is the first laptop to have a curved 21-inch display. Along with that, it also has two GeForce GTX 1080 GPUs, a 7th-generation Intel Core K-series processor, five cooling fans and space for four terabytes of SSD storage.

The Acer Predator 21 X was revealed at IFA in Berlin yesterday. During the launch, Acer said that the laptop is a symbol of great engineering sharpness. They have also added that the Predator 21 X will be made to order from January next year.

Apart from the above mentioned features, Predator 21 X will also have space for four DD4 slots which can have up to 64 GB RAM, a numpad which can be flipped over to be turned into a touchpad, a mechanical keyboard, a 4.2 sound system, and Tobii eye-tracking.

The Acer Predator 21 X is not the best looking laptop, but all of its features makes us forget about its apperarance. It weighs around 8 kilograms which is almost seven times the weight of the company’s Swift 7 ultrathin laptops. With a curved screen which will have a 2560 x 1080 IPS display and LED illumination and a mechanical keyboard with a lot of gaps between keys, Predator 21 X can easily be termed as a perfect gaming laptop.

Although only the demo version of the laptop was revealed in IFA, the sizes, weight and the feel was exactly the same as the final product. When we look at the features, Acer Predator 21 X is definitely the best reveal of the event this year.