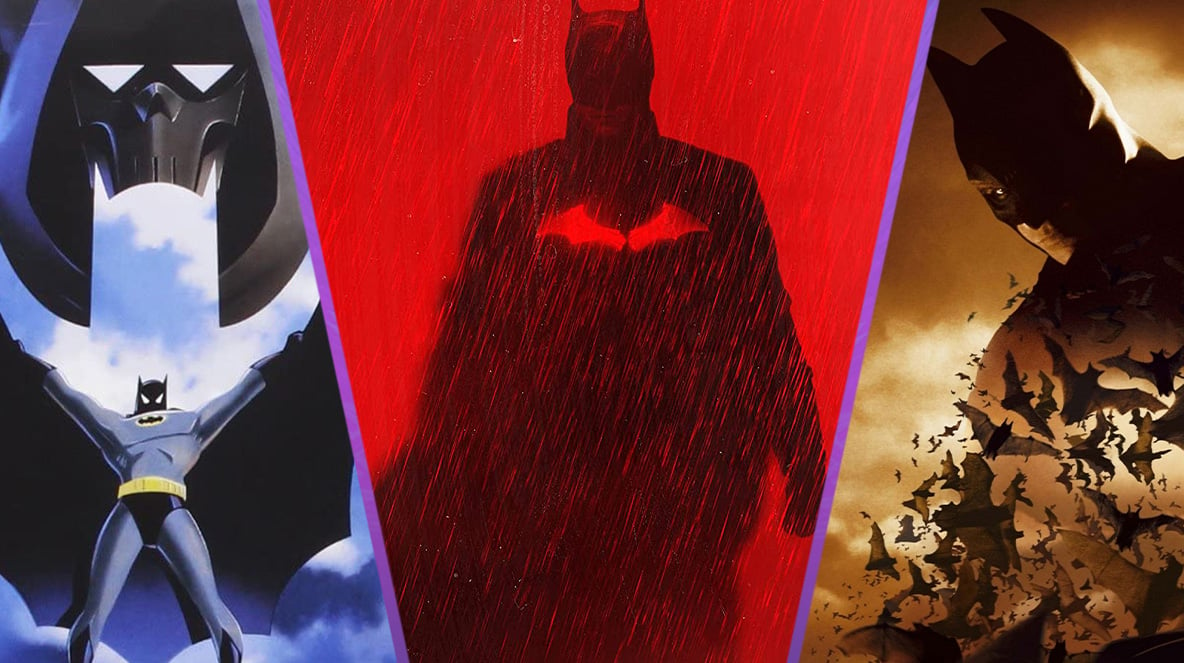 The shortest of the Batman movies ranked on this list, Year One is a brilliant adaptation of Frank Miller’s 1987 comic of the same name. The 1-hour feature manages to balance two origin stories at the same time: a new-in-town pre-commissioner Jim Gordan and a 25 year-old Bruce Wayne ready to begin his war on crime. All the while, this animated film again boasts a great voice cast, this time lead by the legendary Bryan Cranston as Jim Gordan.

Alternating between Bruce Wayne learning to strike fear into the hearts of criminals, Year One does a captivating job of also capturing Jim Gordan’s struggles with taking on crime and the corruption which stems it all – eventually leading to one of the greatest partnerships in comics.

The one that brought live-action Batman back from the dead. After Joel Schumacer made the Batman franchise an unintentional parody of itself, Christopher Nolan hit the reset button, went back to its roots, and brought the world of The Dark Knight back down to earth. Adding elements of the aforementioned Year One storyline and Long Halloween to its crucial dark themes, Batman Begins is unique even to comic book fans, with inclusions like the Tumbler Batmobile and the first instance of Christian Bale’s iconic take on the role.

Despite already being 17 years old, Batman Begins is still a gem as an epic yet grounded spectacle.

Like Batman Begins, the 1989 Batman movie carried a weight on its shoulders: taking the franchise in a new direction to a much darker tone, a far cry from the Adam West series and movie from over 20 years previous.

In execution, this Batman film holds up as a stylistic marvel 33 years later, still being clear why it’s been an inspiration for so much of the Batman media that followed to this day. In a bleak and ugly Gotham, of which it only feels Tim Burton could create, the drab city served as a canvas for the acting prowess of Michael Keaton’s Batman and the electricity of Jack Nicholson’s Joker to shine. A perfect representation of the polar opposition between hero and villain, Batman 1989 is an undoubted classic.

Fresh off his time on the modern Planet of the Apes films, director Matt Reeves pulled off a breathtaking feat with The Batman. While sharing so much of the DNA with comics, games, and other movies, this one stands out as one of the most refreshing Batman films ever. That’s especially since The Batman is more of a psychological detective thriller in lieu of a typical action adventure – something the other live-action flicks had never properly dived into.

Robert Pattinson holds his own with a unique take on Bruce Wayne/Batman. Coming into his own as an actor long since the Twilight years, he does a brilliant job in being a dual-identity hero with too much emphasis on one over the other – his youthful recklessness making him invest all of his identity into being Batman and yet to hone his playboy Bruce Wayne persona.

Along with iconic performances through Colin Farrell’s Penguin, Paul Dano’s Riddler, Jeffrey Wright’s James Gordan, and Zoe Kravitz’ Catwoman – all with that jaw-dropping Batmobile chase scene – The Batman is a classic in the modern day.

2. Batman: Mask of the Phantasm

The Batman movies are often masterpieces in capturing either side of the Batman/Bruce Wayne character. It wasn’t until, or since, both sides of that same coin have been portrayed on equally perfect levels as they had in Batman: The Animated series, with Mask of the Phantasm taking place within that same storyline.

While being a riveting 20’s noir-esque gangster drama, with a haunting villain in the mysterious Phantasm, Mask of the Phantasm also goes to unrivalled emotional depths in Batman’s origins. Kevin Conroy was already incredible when voicing episodes of Batman in the animated series beforehand, but it was Mask of the Phantasm where he took – and still holds – the mantle of being the greatest Batman performer to date.

Even though the Dark Knight is already caught in an entangled web of mafia drama and a dual identity crisis stemmed by his life-long trauma, Mask of the Phantasm even effortlessly coordinates the Joker into all without becoming convoluted. Topped off with Mark Hamill’s signature haunting, cackling laughter, Batman: Mask of the Phantasm bears the intensity of a tragic, orchestral opera, its impact staying with us all almost 30 years on.

There are so many brilliant Batman movies, even beyond this list. Nevertheless, it’s Christopher Nolan’s sophomore Batman outing in The Dark Knight that takes the top spot. From start to finish, the 2008 movie is amongst the pinnacle of not just comic book movies, but filmmaking in general. That’s because no matter where the two and a half hour runtime takes you – be it the beginning’s bank heist, the interrogation, or the hospital scene – that intensity never lets up. All the while, the thought-provoking themes in its dialogue, set design, cinematography, and performances immerse you throughout.

We love Christian Bale’s Bruce Wayne/Batman, and it’s in The Dark Knight where he’s at his best. However, it’s Heath Ledger’s Joker who steals the show – capturing the chaos, madness, and psychotic persona the character is known for, but still managing to make it his own against those like Mark Hamill and Jack Nicholson. No matter which way, The Dark Knight is both the Batman we deserved, and the one we needed.

That’s a wrap on our list of the the top 10 Batman movies ranked. Whilst you’re here, are you ready to play the latest game from the world of The Dark Knight? You can pre-order Gotham Knights on PS5 and Xbox Series X for only £59.95.