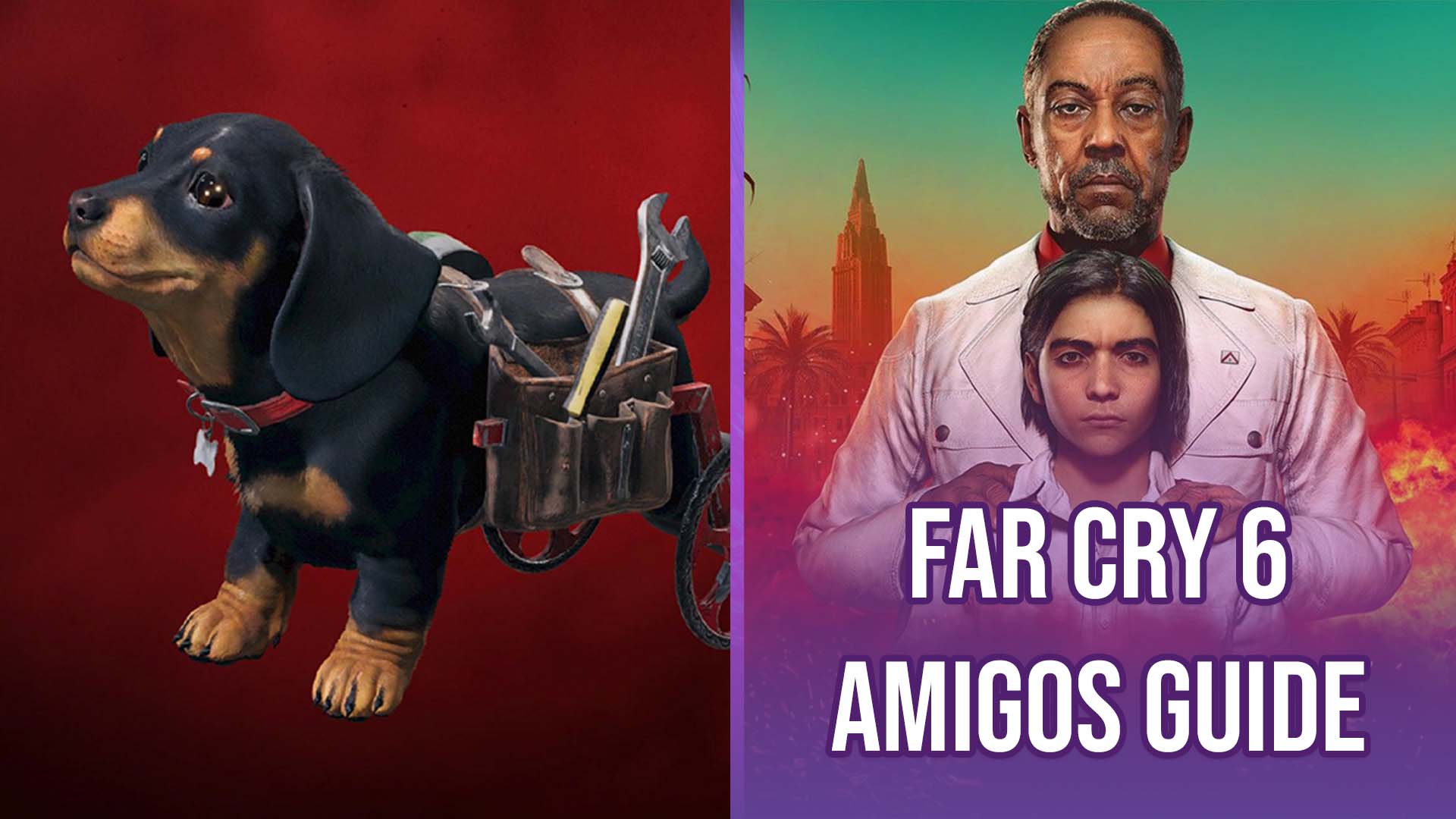 Yara is a big place, and if you aren’t shooting it up with a friend it can get a bit lonely. That’s where Far Cry 6 Amigos come in handy. They are your animal pets that come with a range of abilities to help you conquer Yara.

Far Cry 6 is receiving a wide range of reviews. Some claiming it is the best the series has ever seen, and other that it is just more of the same. You can check out our full review of Far Cry 6 here.

If you decided to pick up Ubisoft’s latest open-world caper, then you’ll be fighting alongside some of those furry Amigos. However, only one Amigo can accompany you at a time, so you’re maybe struggling to decide which of the main game’s seven Amigos to pick from. Here are the best Amigos in Far Cry 6.

Guapo is the first Amigo to be introduced in Far Cry, and really sets the tone for their inclusion in the game. That’s because Guapo is a crocodile wearing a leather jacket. And while this guy may be nice to you, Guapo is a great set of teeth to have on your side. You’ll come across Guapo in the game’s prologue in ‘Juan of a Kind’ so he can’t be missed.

Guapo can be a real helping hand in combat scenarios and can also be left to his own devices for the most part. That’s because Guapo has a regenerative ability called Body Regulation, which heals him over time. By allowing Guapo to regenerate health and even revive himself, he’ll eventually be able to recover 90% of his health thanks to the Reptile Metabolism perk.

My one tip for Guapo is that he isn’t the most inconspicuous Amigo. He will attract attention when you are trying to be stealthy.

Chorizo is the cutest of the bunch, but this little sausage dog has a real taste for blood. Chorizo can be a great stealthy asset in Far Cry 6, as he can draw the attention of guards. You can find Chorizo as part of the “Who’s a Good Boy?” Yaran story on Montero Farm.

With Chorizo, you can sneak past guards or go in for the kill. With his Bloodhound ability, he can tag nearby enemies. One of Chorizo’s better abilities, however, is Keen Senses. This allows Chorizo to occasionally dig up resources from the ground. For players like me who love to sneak through bases undetected, Chorizo is the perfect Amigo. Such a good boy.

Boom Boom is a familiar face to Far Cry fans. Thought to be killed in the explosion of Far Cry 5, it seems that Boomer, or Boom Boom as he is known is Far Cry 6, was shipped off to Yara by Hurk, just in the nick of time. Boom Boom can be unlocked through the Boom or Bust’ Yaran story, and can be found in a blue container in Valle De Oro.

Like in Far Cry 5, Boom Boom’s Fetch Boy ability means he will bring back resources from dead bodies. This can be fantastic when you are running low on supplies. Especially for you gadgets like sticky grenades. Through his Pointer and Expert Tracker ability, Boom Boom can tag nearby enemies. And his Thick Coat ability allows him to withstand more damage. Boom Boom can also attack guards, which can be really handy to draw fire away from you.

Fancy a feisty amigo? Chicharrón will do the trick. This aggressive rooster may be small, but he packs a punch. Unlocked via the ‘Man’s Best Enemy’ story, you’ll need to find a note on Patriotas Peak camp to start this one.

Chicharrón’s main ability, Angry Bird, should tell you all you need to know about him. The little man will throw himself at enemies and attack. Abilities like Roid Rage will help boost his damage and speed up his attack, albeit when his health is below 70%. Angrier Bird does one better by allowing Chicharrón to actually knock enemies down. And lastly, Chicken Feet gives him the dexterity to dodge enemy attacks.

Like Guapo, Chicharrón captures the essence of Far Cry 6. I mean, what screams manic first person shooter more than ripping through enemies with a murderous rooster by your side?

Shadow striker allows Oluso to take out enemies quickly and quietly. And his Mimo Abosi’s Luck ability, give him an extra chance of pulling off without alerting nearby guards. Clearing out bases has never been easier when using the Rage of Ída skill. This results in nearby guards fleeing when they see Oluso tearing their comrades apart. And if things do get a little heating, Mist of Oku covers Oluso in smoke when he is under 50% health. This makes him essentially invincible and more difficult for enemies to spot.

Dani and Oluso can be a couple of silent killers, sneaking their way through Yara.

If you are picking up the Far Cry Blood Dragon pack or Ultimate Edition of the game, you will be treated to K-9000 and Champagne. K-9000 is a robotic dog with the ability to scan turrets, security cameras, alarms and tripwires. They are immune to poison and with their ‘Enhance!!!’ ability they can boost your damage to tagged enemies. However, if things are looking so great for K-9000 he can use his Termination Protocol ability to self-destruct when taking fatal damage. K-9000 is even more helpful as you travel to the larger facility in the North of Yara.

Champagne is part of the VICE pack and is all about the bling. She’ll collect money from dead bodies with the help of her Status Symbol ability. However, she isn’t afraid to get her claws dirty. With the ‘Greed Is Good’ ability, Champagne has a better chance of taking down enemies if you have more money in the bank. Predatory Instinct allows her to loot after she kills them with a silent takedown. And Sonic Snarl allows her to knockdown nearby enemies when she takes damage with a massive roar. With some extra money in your pocket, Champagne can help you gear up in style.

Those are all of the Amigos in Far Cry 6. Which are your favourites? Let us know over on our social channels!