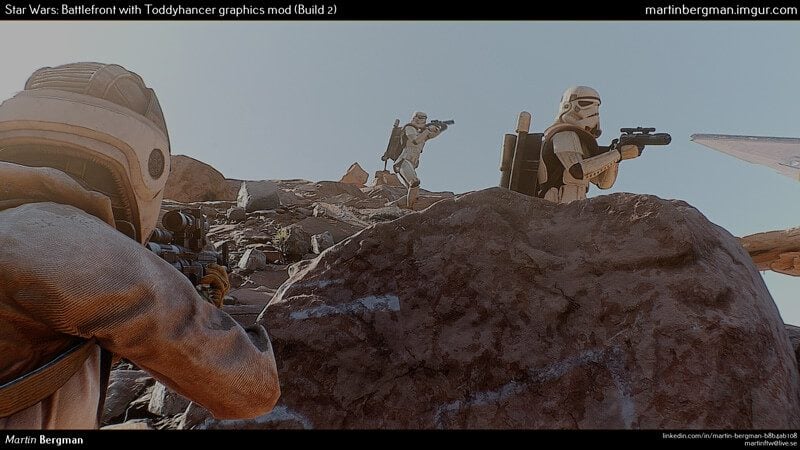 The Beloved Battlefront franchise has just recently been given a third installation, this time DICE had a shot at claiming the hearts of many Star Wars fans, whether it did or didn’t is up to you to decide.

For $60 (roughly £40 for my fellow brits, this dollar business is confusing) you can make that judgement for yourself and with mixed reviews flying around blogs and websites, it’s probably best you take your own stance on this.

However if you’re a member of the master race cult, all hope isn’t lost. You can shake off the feeling that you’re just playing a Battlefield re-skin with the ever so generous modding community doing what they do best.

Thanks to one specific modder, Martin Bergman, you can now play the game in a way that looks like it’s been cut straight from the movie, and we aren’t talking about shoddy pre 2000 special effects, the visuals would be fit for a blockbuster movie, a movie so good it would probably star Chris Pratt (It’s just the fanboy in me speaking).

The ‘Toddyhancer’ adds certain filters to the game, making the game higher resolution and satisfying all your childhood dreams.

Don’t just take my word for it though, take a look at the screen shots below and feel the inner rebel inside you marvel at this masterpiece.

Not a single pixel was seen that day

Actual in game footage, believe it or not

These guys were obviously distracted by how good the world looks

Now you can laugh at your victims with these stunning graphics

I find the textures deeply satisfying

Freeze frame or not, you can’t deny how awesome this looks

Even when you’re outnumbered, you can die in style with this mod

And here I was, thinking a mound of rocks could never look THAT good

You wouldn’t believe this was just a game

The landscapes look more like a painting than a game. Truly fantastic work

As you can see, this mod has some stunning visuals that will turn every firefight into a mouth wateringly cinematic experience and will surely make the game feel more worth its hefty price tag.

As of yet no official date or news has been released regarding this mod’s public release but when moves are made, you can be sure to hear it here.