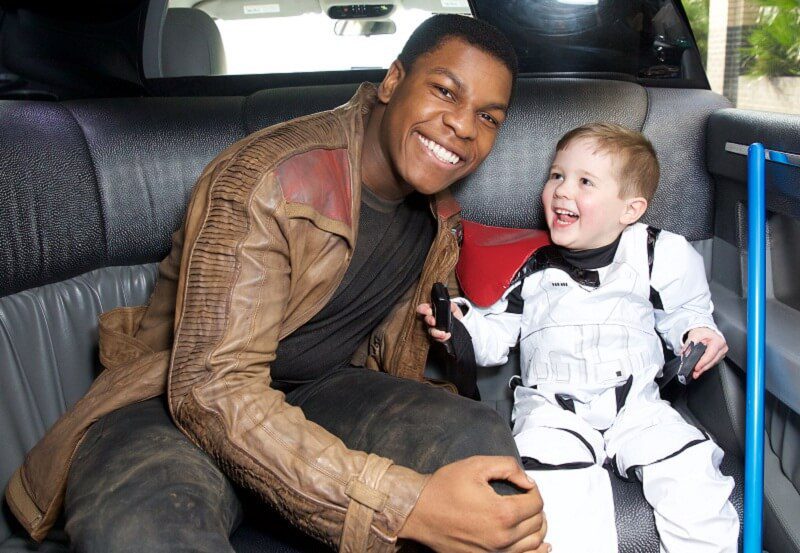 Star Wars Episode VII actor John Boyega is making sure that he uses his powers for something good. He recently visited a boy with a brain tumor dressed as his Force Awakens character, Finn.

Daniel, the little kid who watched the movie, had his wish of meeting Finn granted through the organization Rays of Sunshine.

The actor’s Instagram post caption reads, “I stayed in character while I was with this brave boy asking him what a car was. He taught Finn about everything earth related! Really thankful for the opportunity this child granted me and I’m just humbled! I hope I played a little part in making you smile young storm-trooper.”

“When I heard about Daniel’s wish to meet Finn, I jumped at the chance to make it come true. It was fantastic to be a part of his very special wish with Rays of Sunshine. He is an amazing and inspirational boy and it was a pleasure to meet him and his family. It was also great to meet the children at The Royal London Hospital and be a part of something so positive,” added Boyega in another statement.

As Finn’s friend Rey was missing from the scene, another kid named Layla was quick to dress up as her and accompany Boyega and Daniel in the hospital as they met other kids.

Rosalind Bell, Daniel’s mother, who was overwhelmed by the event said, “Daniel loves Star Wars and especially Finn – he thinks he is super cool and runs around the house pretending to be him every day.To see Daniel smile like that without a care in the world after everything he’s been through, knowing how much time and effort Rays of Sunshine have put in to his wish and that John Boyega gave his time to make it come true, is priceless. Both Rays of Sunshine and Finn together have changed Daniel’s world for him. These things can’t be bought and really do mean the world. There are no words to express how grateful we are to you all. Daniel is on cloud nine! Or should we say, somewhere past Jakku!”

Rays of Sunshine, a children’s charity organization of the UK which helps in granting wishes to children suffering from serious illnesses was the organizer of this wish-granting event.