A Beta for the long awaited Squad Join feature is now available for Battlefield 4 on PlayStation 3, PlayStation 4, Xbox 360, and Xbox One.

The feature allows you to set up a Squad for up to five players before joining a multiplayer game. Once you start the game, the Squad will remain together and you’ll be able to re-join your Squad again if you’ve left it – if the squad has a free slot. The feature is available for base game maps in the Conquest, Team Deathmatch, Obliteration, Rush, and Domination game modes only at the moment. Other maps and modes will be supported later.

DICE announced that there will be more features and tweaks based on player feedback as they continue working on it. DICE  expects to have an updated version of it when it launches the Dragon’s Teeth DLC this summer, an exact date has not been announced yet. DICE also announced that they’re deploying high-performance servers to fix the game’s lingering technical problems, and that players can now rent their own private and public servers. 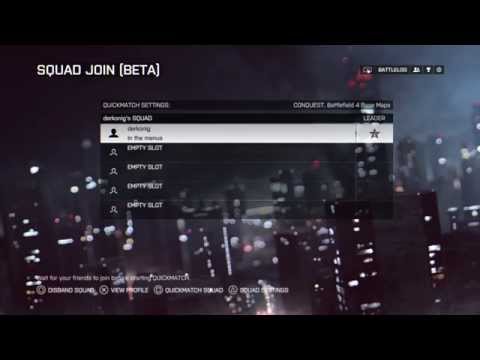