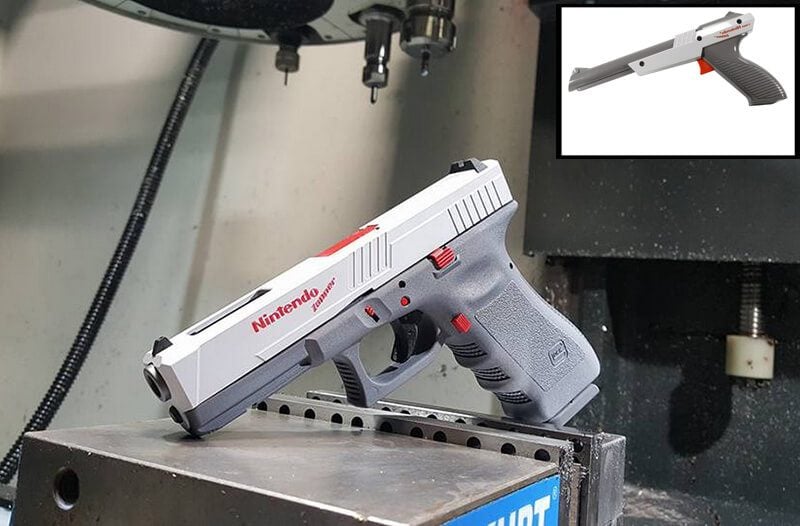 This might not go down well with everyone but a company called Precision Syndicate has gone ahead and made a real firearm look exactly like the fake Nintendo Zapper that was used to shoot Ducks in the popular retro game called Duck Hunt.

The gun, to be fair, looks amazing, but it fires actual bullets so don’t even think of shooting it at your TV (like you did with the Nintendo one).

The company posted a couple of images of the gun on its Facebook page and the post has gone viral, gaining over 160k shares at the time of writing this article.

In case you weren’t born or don’t know about the original Nintendo gun. It was created way back in 1984 and allowed gamers to point and shoot at their TV screens and kill virtual targets (mostly ducks).

Needless to say, the company is receiving mix reactions from people regarding the logic behind creating such a design. Some of them have been quite harsh. One commenter wrote.

The fact that this exists is why cops don’t have the time to make the decision of its a toy or a gun,” said one commenter, while another said, “Worthless craps for making this! Not only would a child have a hard enough time telling the diff if it’s real or fake imagine all the law enforcements that now might second guess it and lose their life and others around!

However, it’s also gotten quite a few positive responses.

Finally… We were waiting for someone to let us do this. We weren’t the first to do it but WOW, this glock turned out good!

The company also issued an official response since it was getting a lot of heat from a certain section of the public, ensuring that it doesn’t intend to mass produce this gun, and people shouldn’t be worried. Not to mention, anyone should keep guns AWAY from kids irrespective of anything.

In light of the “Nintendo Glock” drama, we feel that the media and our fans need to know that this firearm will not be mass produced nor will it ever be. This is a one off custom build for a friend of ours. Do to the thousands of emails and messages we have received in the past 2 days we have been unable to contact everyone in a timely manner, please be patient we will get to you as soon as possible. Thank you all for your support! Oh, and please.. keep your guns locked up and away from children, it’s common sense.

People always have an opinion and in this case we don’t know who’re in the wrong here. Maybe you do. Make yourselves heard below.

More stories you should read