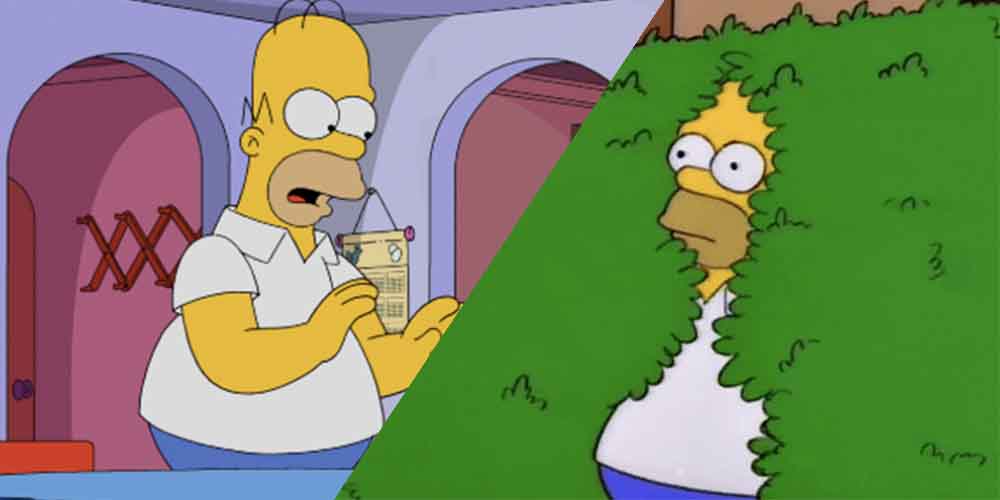 Unless you’ve been living under a rock for the last 10 years, you’ll be aware of the Homer Bush Meme.

This meme originates from the fifth season episode “Homer Loves Flanders,” where Homer becomes friends with Ned Flanders and realises that he actually likes him.

As a result, Ned begins to hate Homer with a burning passion.

The scene in question is actually a reference to Terminator 2: Judgement Day. Homer comes through the bushes that separate his home from Ned’s in a manner very similar to T-1000.

In case you’ve forgotten exactly how it goes, here’s a reminder…

The scene continues later, with Homer chasing down the Flanders family in their car, and using a pair of golf clubs like hooks to latch onto it, just like a similar chase from the movie.

Anyway, the bush scene has become a GIF (and a meme) and it expresses embarrassment. It can also be used when drama is kicking off and you want no part of it.

Well now The Simpsons has gone meta by including the GIF/meme in the latest episode. To be exact, it’s episode 12 of season 30, titled “The Girl On The Bus.”

In the scene, Homer texts Lisa saying he can’t find his phone, but when she points out he’s using it, he replies with the famous GIF. The Simpsons shared a clip from this scene on Twitter.

Time to head back into the bushes! Another episode of #TheSimpsons is in the books. pic.twitter.com/l7SW6a9Uz5

Beautifully done, I must say.