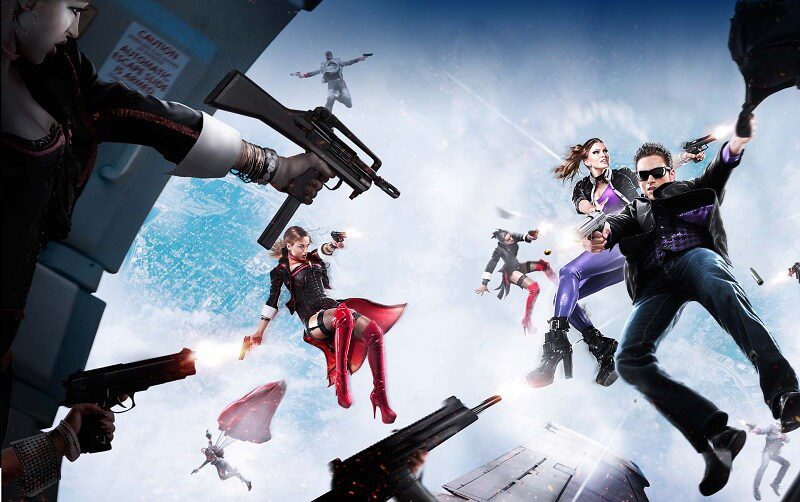 Saints Row: The Third or Saints Row 3 is the third installment of the Saints Row series. The third person open world adventure game, developed by Volition and published by THQ was released in 2011.

Saints Row 3 received positive reviews from users and critics and was nominated for Best Narrative at the 2012 Game Developers Conference. The players of the game needs to lead the Third Street Saints gang in the fight against the rival gangs in the turf war of the city.

Here’s a cheat guide for Saints Row 3 which will help you in your progress in the game.

Keep in mind that Trophies and auto save features are disabled when the cheats are activated. You can however save the game manually if you want to.

In order to be invincible you’ll need to reach Level 50 and have more than $5 million. You can do this easily by using the “whatitmeanstome” code for around twenty times.  After doing that, you must go to the character abilities screen and buy all the options that reduces of damage from fall, fire, bullet, explosion, and vehicle strike. This will make you almost invincible although you might die if you crash with an aircraft or is run over by a tank while in a normal vehicle.

You can unlock the bonus vehicles mentioned below by completing the mentioned task.

Wraith: You need to successfully complete the Trailblazing Activity in Decker’s territory in hard level.

X2 Phantom Motorcycle: Complete the Decker’s version of the Trailblazing Activity to unlock this motorcycle

If you want to customize a vehicle which is non-customizable, you’ll need to take any customizable vehicle to Rims Job and press Triangle. After this is done go to “Garage” in the menu and highlight a non customizable vehicle from your list. Make sure you don’t press the button to retrieve it, so press the back or the circle button and confirm to exit. Doing this will lead you to the customizing menu which will allow you to customize any vehicle.

How To Earn Easy Money

Here are a few ways to earn easy money on the game.

You’ll need to complete the following tasks to unlock the mentioned costumes.

Cops/SWAT: Complete all the Snatch activities for Kinzie

Deckers: Complete the Assassination from Kinzie (In Mission 37) which needs you to wear one.

Mascots: Complete all the S.E.R.C. activities of Professor Genki.

National Guard: Complete all the activities of Tank Mayhem.

Strippers: Complete all the Escort activities for Zimos.

Where To Find the Attack Version of Eagle

You can find the Attack version of the Eagle helicopter on the Armory Island. The helicopter which has dual pilot guided mini-guns and rocket pods will appear at the southeast helipad of the island if you approach it from ground. You’ll need to wait for at least a minute or two after landing on the ground for the helicopter to appear.

Get The Cars To Move Out Of Your Way

This is quite simple. You’ll just need to steal a police car and honk (honking will turn the siren on). This will get the other cars move to the right and make way for you,

To get the Bunny, you’ll need to go to Luchadores’ territory and then move to the lower left part of the map. You’ll then find some boats and you’ll need to mount the second boat, where you’ll find a gang operation with a big bunny captured in the fishing nets.

You earn nearly $300,000 by killing an NPC wearing a Professor Genki costume. The enemy will appear randomly on the radar in Steelport. You’ll have to be careful while fighting him as he is armed with a stun gun and has large amount of health.

You’ll first need to unlock the Burns Hill Reactor first and then go to the bathroom upstairs. You’ll find a magazine titled “Boy-Toy” at the edge of the Jacuzzi in the bathroom which features Shaundi in its cover. Shaundi was also featured in Playboy magazine’s “2008 Virtual Vixens”.

While on the “Three Way” mission, Oleg, Pierce and your character will go to numerous locations to kill Luchadores and S.T.A.G. Pierce will then ask if someone wants to say something before they die upon reaching the National Guard armory.

In reply, your character will say the following dialogues depending on the voice that is used.

Male Voice 2: He has an irrational fear of bees.

Female Voice 1: She is on a coed Curling team.

Female Voice 2: She wants to make love with Pierce in front of a live studio audience.

Zombie Voice: He or she is fluent in six languages.

Oleg: He is in love with Kenzi.

There is a missing ship attached to the wall on the top floor of the cockpit of the freighter boat in Camano Place. “USG Ishimura” is on the list and it refers the Dead Space.

You can get the reference of Volition’s The Punisher and the previous two Saints Row games after Kinzie Kensington’s hideout is unlocked. You’ll need to go upstairs and enter the room which has computers in it. When in the room, if you zoom in on the ceiling using a sniper rifle you’ll see some newspapers with clippings from The Punisher game. The headlines in the newspaper however reads about Saints Row and Saints Row 2.

You can hear the following songs in the stations named below:

“Baggy Bottom Boys” by Jokers of The Scene
“State Of Ghetto Jackin feat. DJ Nasty” by Baobinga
“Satisfaction” by Benny Benassi
“A City In Florida” by deadmau5
“Idealistic” by Digitalism
“Pitiless” by Dilemn
“Heartbeats” by Grum
“Double Bubble” by Jesse No
“OH NO U DON’T” by Jesse No
“Angry Elephants” by Junkie XL
“Wallflower” by Kevin & Carrick
“Scrub Down” by Kevin Seaton
“C.L.U.B.” by MNDR
“Neckbrace” by Ratatat
“Woo Boost” by Rusko
“31 Seconds To Die” by The Bloody Beetroots
“Don’t Break It” by Tugboat

“Gimme What You Got” by Amanda Blank
“Done Did It (feat. Nicole Wray & NOE)” by Blakroc
“Throw Your Hands Up” by Freeway
“My Life Is A Party” by G-Eazy
“Power” by Kanye West
“Get It In feat. Ammo & K. Madison” by K:B
“I’m Burnt [Feat. Problem]” by Kurupt
“Don’t Panik” by Medine
“Paradise” by Mickey Factz
“Quiet Dog” by Mos Def
“In The Zone” by Pharoahe Monch
“Fur In My Cap” by Rob Roy
“Boom Bye Yeah” by Sean Price
“Push Play” by Sixx John
“Can’t Stop Now” by Southpaw Swagger
“The Countdown” by Sum Kid
“93 Hardcore” by Tandem
“Yonkers” by Tyler, The Creator
“Mirrors feat. Bun B” by Wale
“Good to Go Feat Bun B” by Yelawolf

“Berzerker” by After The Burial
“Runes To My Memory” by Amon Amarth
“Obfuscation” by Between the Buried and Me
“Perfect Weapon” by Black Veil Brides
“Suicide Jag” by Chemlab
“Feel Like I Do” by Drowning Pool
“Apocalyptic Havoc” by Goatwhore
“Regurgitated Disinformation” by Job for a Cowboy
“WW III” by KMFDM
“arma goddamn motherfuckin geddon” by Marylin Manson
“Divinations” by Mastodon
“Apologies Are For The Weak” by Miss May I
“The Lotus Eater” by Opeth
“Rise, Rebel, Resist” by Otep
“Misanthropy Pure” by Shai Hulud
“Love?” by Strapping Young Lad
“Necropolis” by The Black Dahlia Murder
“Farewell, Mona Lisa” by The Dillinger Escape Plan
“Slow Revolution” by Tugboat
“Engine Wrecker” by You Love Her Coz She’s Dead

You can get the trophies mentioned below by completing the corresponding tasks:

Kingpin (Platinum): Unlock all Trophies in Saints Row: The Third.

Mr. Fury Would Be Proud (Silver): Finish Act 3 in one way.

Gangstas… In Space! (Silver): Finish Act 3 in another way.

Hack the Planet (Silver): Finish all City Takeover gameplay in the Stanfield district.

Tune In, Drop Off (Bronze): Finish all instances of Trafficking.

And Boom Goes the Dynamite (Bronze): Finish all instances of Heli Assault.

Your Backseat Smells Funny (Bronze): Finish all instances of Escort.

Double Dose of Pimping (Bronze): Finish all instances of Snatch.

Go Into the Light (Bronze): Finish all instances of Guardian Angel.

Tank You Very Much (Bronze): Finish all instances of Tank Mayhem.

Everything is Permitted (Bronze): Kill all of the hitman Assassination targets.

Hi-Jack It (Bronze): Steal and deliver all Vehicle Theft targets.

Getting the Goods (Bronze): Find 25% of all Collectibles.

Life of the Party (Silver): Find 100% of all Collectibles.

Ow My Balls! (Bronze): Do your first nutshot AND testicle assault.

Gellin’ Like Magellan (Silver): Explore every hood in Steelport.

A Better Person (Bronze): Buy your first Upgrade from the Upgrade Store.

Cowboy Up (Bronze): Fully upgrade one Weapon in each slot.

Pimped Out Pad (Bronze): Upgrade one Stronghold to its full glory.

Flash the Pan (Bronze): Destroy all Gang Operations in Steelport.

Jumped In (Bronze): Create and share a character online.

Opulence, You Has It (Bronze): Finish ‘Party Time’.

Stay Classy Steelport (Bronze): Kill 25 Gang Members each with ‘The Penetrator’ and ‘The Fart in a Jar’.

You’ll need to have the “Genki Bowl VII” DLC for the following trophies:

Cooked To Perfection (Bronze): Use the cars flamethrower to roast 50 pedestrians (in a single instance of Super Ethical PR Opportunity).

Get Off My Back (Bronze): Destroy 5 chase vehicles (in a single instance of Super Ethical PR Opportunity).

Cat on a Hot Tin Roof (Bronze): Kill each and every hte rooftop mascots (in a single instance of Sad Panda Skyblazing).

Flame On (Bronze): Fly through all of the rings (in a single instance of Sad Panda Skyblazing).

Feeding Time (Bronze): Throw 5 mascots into the water (in a single instance of Apocalypse Genki),

Murder in the Jungle (Bronze): Complete both instances of Apocalypse Genki.

C-C-C-Combo Breaker (Bronze): Cause $150,000 worth of damage in a single Sexy Kitten Yarngasm combo.

You’ll need to have the “Gangstas In Space” DLC for the following trophies:

I Do My Own Stunts (Bronze): Land on the Parachute Target while in the rescue scene.

Revenge of the Navigator (Bronze): Destroy 10 enemy spacecraft with the Aegean while filming.

Do a Barrel Roll! (Bronze): Perform all vehicle stunts with the Aegean.

C-List Celebrity (Silver): Complete all missions for Gangstas in Space.

You’ll need to have the “The Trouble With Clones…” DLC for the following trophies:

B.A.M.F. (Bronze): Use only melee attacks to defeat 15 enemies at Technically Legal.

Eye of the Bee-Holder (Silver): Spray  Swarmitron on 25 rabid fans.

Supaa-Excellent! (Bronze): Shoot down a helicopter with a Saints Flow fireball.

Send in the Clones (Bronze): Kill a Brute while under the influence of Saints Flow using only melee damage.

The Johnnyguard (Bronze): Prevent Johnng Tag from taking damage on the Magarac Bridge.

My Pet, Monster (Silver): Finish all missions for “The Trouble With Clones…”