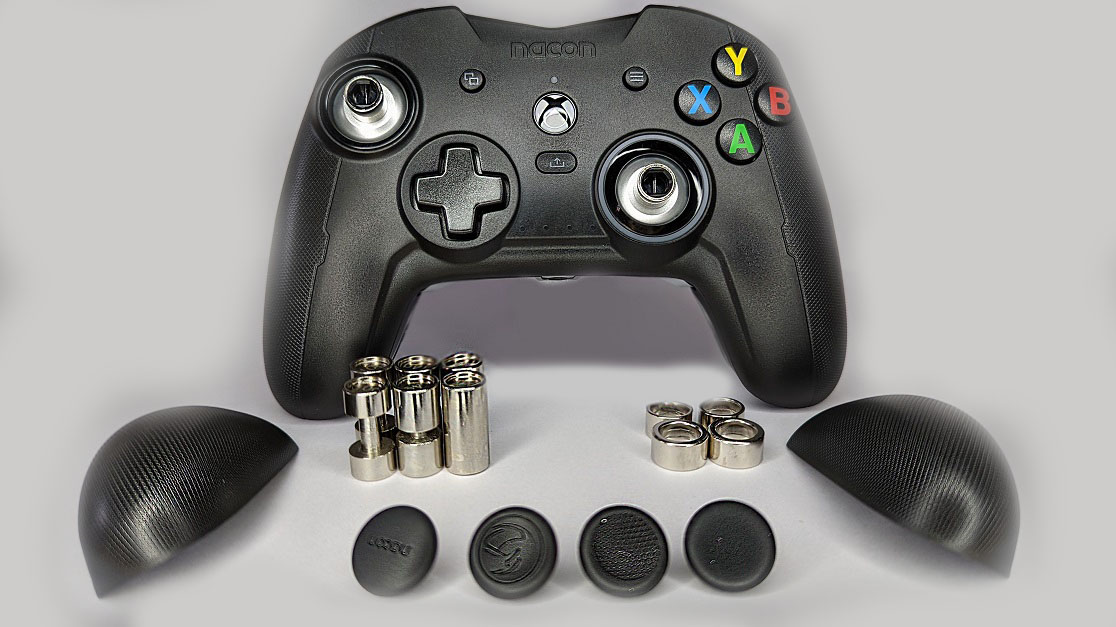 For those who want it all alongside premium features and a reasonable price tag, Nacon Revolution X Pro Controller is an interesting proposition.

Customisation is the name of the game in our current console generation. We all want to put a personal stamp on our tech, from custom plates for a PlayStation 5 to grabbing a design lab Xbox controller. https://youtu.be/YXcSPEdSggQ

First off, let’s go over the specifics of Nacon Revolution X Pro

Remember that Nacon Revolution X Pro Controller is a budget alternative for an official Xbox Elite controller, so one’s expectations should be adjusted to suit. With that being said, users are getting a lot of bang for their buck at its current price point.

Overall it feels nice to hold, with the overall ergonomics being sound. However, the one major issue is the plastic used for the casing; it’s the typical third party controller hard plastic.

It doesn’t affect usability or functionality, and Nacon has gone to great lengths to add a premium feel by adding a cross-hatched texture around the side and back half of the grips.

Most controllers feel more premium due to their weight, and this preference can change from player to player. To help remedy this, Nacon has included sets of 10g, 14g and 16g polished metal controller grip weights that clip into the controller. Some might class this as a novelty, but we think it’s some nice attention to detail.

Like the official Elite controller, the thumbsticks and grips are included. Whilst users won’t be able to adjust tension or height, they can switch out the thumb grips for rounded ones.

They’ll also be able to adjust thumbstick travel thanks to the included polished metal stick rings. For example, one likes a shorter thumbstick travel with higher in-game sensitivity when playing first-person shooters. Nacon Revolution X Pro allows this and more with no issues.

This is a good option for a rapid-fire or programmable button experience on a budget. However, we do have some gripes with the positioning of the extra rear buttons.

With Nacon Revolution X pro controller, we can see where they were going with it, but it’s very easy to accidentally press them during gameplay. I’m a big fan of mapping melee and interaction button presses to back buttons; it feels more natural.

However, gripping this controller too hard during an intense firefight, for example, will result in an accidental press. Perhaps this is just how we game, but we recommend mapping the two higher buttons on the pad for any important actions to be safe.

This is always the make or breaks for any third-party controller, and Nacon has done a great job for the most part. The D-Pad feels like a sponge and isn’t too responsive, but we’re yet to find a third party controller that gets D-Pads right the first time.

Negativity aside, the face buttons feel great with a slight click on a press before rebounding efficiently. They’re also slightly rounded and feel nice during all kinds of gameplay. If we’re being honest, we didn’t notice much of a difference from a standard Series X/S pad in this regard.

The trigger and shoulder buttons are also spot on, although the latter may be an acquired taste for some. This reviewer likes clicky buttons, just like pressing left on a good mouse, which is exactly what these shoulder buttons are. Some may want a more solid press when using triggers, but it’s good enough here.

The triggers have a nice amount of travel and spring back quickly for a nice response and feel overall; we’ve nothing to moan about here. Although it would have been nice to see an adjustable travel option.

For just under £90, $90 or 90€, this isn’t a bad controller by no stretch of the imagination. Some of its features and accessories feel truly premium, such as the custom weights and thumbstick adjustments.

The problem with Nacon Revolution X Pro Controller is it doesn’t get some basics right. A hopeless D-Pad and back button placements are problem areas but can ultimately be forgiven at its price point, Dolby Atmos compatibility and native customisation app available on Windows and Xbox systems.