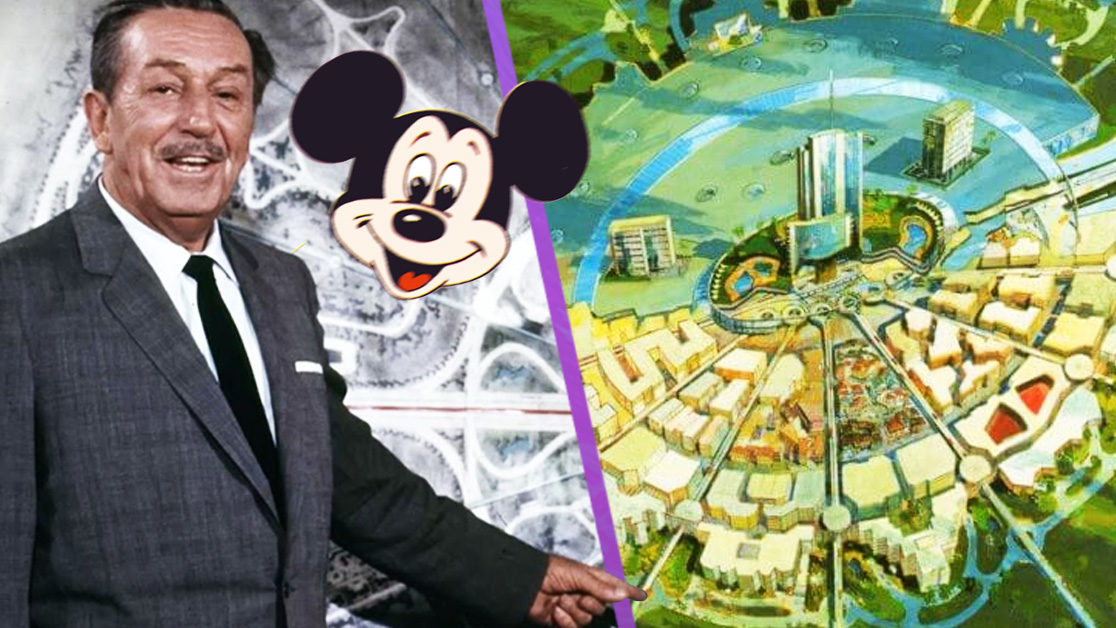 Dreams of the Future

Walt had always been an innovative type, even if he got the reputation for cartoon mice and doe-eyed princesses. After all, creating Mickey Mouse and Snow White weren’t easy achievements. Mickey Mouse’s 1928 debut in Steamboat Willie constituted the first ever animated film with synchronised sound at a time when silent film dominated, and 1937’s Snow White and the Seven Dwarfs was the first ever feature length animation.

And these were just the tip of the iceberg for Disney’s studio, which pioneered a whole range of filmmaking advancements from the Multiplane camera (which enabled the two-dimensional medium of animation to more closely simulate three-dimensions), the forerunner to modern day surround sound employed during the release of Fantasia in 1940, and the melding of live-action footage and animation in movies like Mary Poppins.

Disneyland, even, was a ground-breaking concept when it opened, setting the standard for what an amusement park should be by applying the knowhow of Hollywood production designers to the world of themed entertainment. Visitors could immerse themselves in their favourite Disney movies, vividly realised by the best talent in showbusiness, as well as various intricate zones themed to popular movie genres like the Western or science fiction.

And Walt was intimately involved with it all, especially Disneyland. He came up with the initial idea, worked closely with the artists and engineers, and even sold his house to fund the construction. Indeed, Disneyland’s entrance was a romantic recreation of Walt’s childhood home of Marceline, Missouri as it existed at the turn of the twentieth century.

And years after Disneyland’s opening, he was still lobbying for improvements, pushing for the latest and most cutting-edge technologies to be embedded within the park. There was the fleet of rideable submarines, inspired by the exploits of the world’s first nuclear submarine after it crossed the geographic North Pole in 1958. There were the robots, first introduced as singing birds in an attraction based on American tiki culture, and next as a life-size humanoid animatronic resembling the 16th US President, Abraham Lincoln.

And there was the monorail, which, in sending sleek, rocket-shaped trains careening around Disneyland, hoped to serve as a blueprint for a new and efficient mode of future transport that could be installed in cities around the world. “Today you’re seeing America’s first scheduled monorail system in operation,” a television announcer proclaimed as the system made its inaugural journey in 1959. “Soon others will follow, heralding the day when such rapid transit systems will relieve America’s crowded streets and perhaps even bring back the original meaning of the word ‘freeway’.”

Congestion was a pressing concern for Americans in the mid-twentieth century. In fact, Disneyland quickly found itself at the centre of a heaving urban sprawl as shops, bars, motels, and restaurants burgeoned around the park, and nearby streets groaned with traffic. “A monorail system,” Disney argued, “could well be an answer to growing traffic congestion,” and Los Angeles County supervisor Kenneth Hahn agreed, arguing that “while the line is only two miles long it demonstrates clearly that rapid monorail transit is feasible and practical.”

But Walt had more ideas to tackle the growing congestion in American cities than just a monorail, and it soon became something of an obsession…

In October 1966, Walt Disney filmed a presentation outlining his vision for a project that vastly exceeded anything he’d embarked on before. Disneyland had been described as the most “outstanding piece of urban design in the United States” at a 1963 Urban Design Conference at Harvard University, and Walt felt bolstered he could do one better, drawing upon the philosophies and trailblazing technology that had made the park so efficient to improve the standard of living in modern urban centres.

The studio magnate had been feverishly studying city planning, reading up on the New Towns of post-World War Two England, and constantly drew sketches of his ideas for a proposed “City of Tomorrow” on napkins that he stuffed into his pocket and brought to brainstorming sessions. “I happen to be an inquisitive guy,” he said in an interview at the time, “and when I see things I don’t like, I start thinking, why do they have to be like this and how can I improve them? City governments, for example.”

EPCOT, or the Experimental Prototype Community of Tomorrow, would be Walt’s solution.

Walt was selling something almost unfathomable, a futuristic city that was not simply an attraction to visit but a place to live and work, built and run by Disney. At this point, his company had spent $5 million to purchase the land in Florida necessary to make his City of Tomorrow a reality. Adjusted for inflation, that would be over $45 million today, and they hadn’t even broken ground yet – or exactly agreed on what the finished city would look like.

But the presentation gave a good sense of how EPCOT was shaping up. Like the comforting round shapes of Mickey Mouse, the city was set to be circular, with a bustling metropolitan area in the middle where EPCOT’s denizens could work and play. The presentation boasted that this “dynamic urban centre” would be enclosed in a giant “climate controlled” dome, meaning the Sunshine State’s intense weather needn’t ever pose a problem.

And then, on the outskirts of EPCOT, residential areas would provide homes for the city’s population, surrounded by vast, fertile greenbelts.

“Here the pedestrian will be king,” the film proclaimed, safe from the automobiles that clogged up other American cities. At EPCOT, cars and trucks were relegated to an underground zone far beneath the city, and in their place, the monorail pioneered at Disneyland would whisk citizens to and from work, in tandem with a smaller electric train, the WEDWay PeopleMover – WED standing for Walter Elias Disney, the city’s benevolent overlord.