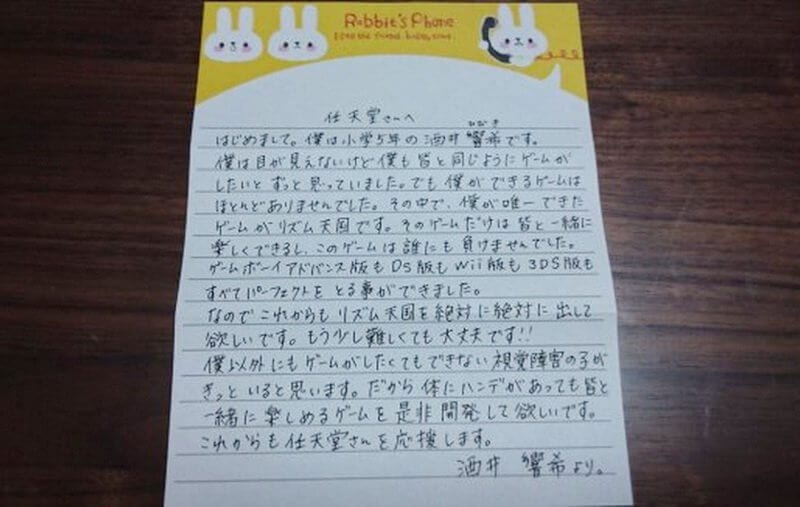 A young boy is catching the internet’s attention after a NeoGaf forum user uploaded a post on the forums.

According to the post, a blind, fifth-grader named Hibiki Sakai wrote a letter to Nintendo.

Despite the limited amount of games that accommodate his disability, Sakai explained that the one game he can play with his friends is Rhythm Tengoku. “It’s the only game I can enjoy together with others,” Sakai explained. “I’ve gotten perfect scores on all the versions on the Game Boy Advance, Nintendo DS, Wii, and 3DS too.

Towards the end of the letter, Sakai pleaded with the Japanese developer to make new entries in the Rhythm Tengoku series. Sakai also explained to Nintendo that there might be other kids with visual limitations who wish to play video games but can’t.

“I think that there are a lot of other children with visual impairments who want to play video games but can’t. So I’d love for you to develop more games for people with handicaps to enjoy playing with others.”

After the letter had been delivered, Nintendo decided to write the young lad back. “Sending such a sincere correspondence to just one person is truly customer service,” Hibiki’s father wrote. “Nintendo we’re anxiously awaiting the next installment in the series!”

The response to Hibiki from Nintendo states as follows:

Thank you so much for sending us here at NIntendo your heartwarming letter.

We have passed on your letter to NIntendo’s development department. We want to keep making games that everyone can have fun playing, so thank you for your support.”

Nice to know that Nintendo is dedicated to ensuring all their fans have new games to enjoy.