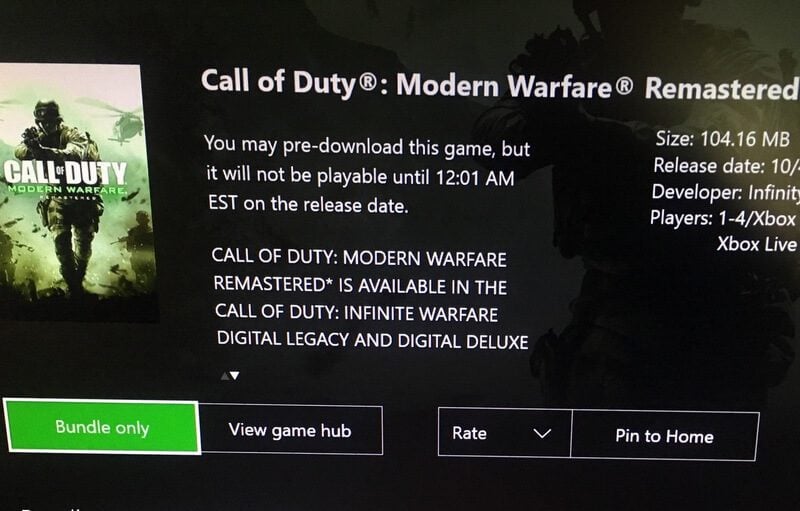 Activision did a huge fan-service by announcing it was remaking Call of Duty: Modern Warfare for the PS4 and Xbox One yesterday. The game will be developed by Raven Software and will be a total remake of the original Modern Warfare game.

It’ll feature the full single-player campaign and 10 of the most popular maps from the original. Gamers would only be able to purchase the game with special editions of Infinite Warfare, this year’s iteration of the Call of Duty series, which takes the battle into space.

Fraghero has received multiple screenshots that hints at a possible scenario when it comes to the release schedule for the Modern Warfare remaster. On the Xbox Live store, the game is listed for a October 4, 2016 release date, which is exactly one month before Infinite Warfare releases.

This will not only continue the tradition of Activision offering the PlayStation community (although this time Xbox is getting it too) early access to Call of Duty content but also make sure that the launch of Infinite Warfare doesn’t suffer since the remastered version of Modern Warfare will feature a full multiplayer mode along with prestige and other features.

This may hamper the user base for Infinite Warfare on launch day if both the games releases simultaneously. Releasing it in advance would ensure both games get a balanced reception.

We’ll update this story if Activision releases an official statement regarding the same.