The PS4’s Lead Architect Mark Cerny was a special guest at the recent Gamelab event where he was discussing the reason why the company decided to use the standard x86 architecture over a Cell processor.

He states, “After the PlayStation 3 shipped, the hardware team immediately started working on reducing the manufacturing costs of the console. And in 2007 they also began a postmodern analysis of  PlayStation 3. What had worked and what hadn’t, with the goal of beginning of the basic direction to take with the next console,

“In other words this was the initial step in creation of PlayStation 4. And for the first time in Sony Computer Entertainment’s history, this process was inclusive and collaborative, the ICE team, the other tools, the other technology teams were invited to participate. Now the most obvious path though was to continue using CELL.

“Though the learning curve was steep, it was clear that mastery of SPUs was leading to some amazing titles like Uncharted: Drake’s Fortune, so it was an definitely was an option to continue using CELL. Perhaps even enhancing it to make it more powerful or easier to use. But there were other options too, we can move to a more conventional architecture with just a CPU and a GPU.

“If we went with that approach, choosing a CPU will be a very big deal because that will determine which vendor we work with and thereby determine  pretty much every aspect of our project. Timeline, business structure, development cost in a way. So there were two main possibilities for the CPU, the power PC architecture that we used in the PS3 and the CELL, and the x86 architecture used in pretty much every modern PC.”

“The conventional wisdom as expressed by the number of  first party game programmers was that the x86 architecture was unusable in a games console. Now I took this very seriously and thought that a console needs to be competitive with a much more powerful PC  and if game programmers need straight forward power PC architecture to make that happen. I understand. I just wondered whether this is true, cause the potential design space for the PlayStation 4 was going to pretty limited for using the x86 CPU.”

He continues, “So I spent my 2007 holiday in researching the 30 some year history of the x86, all the way from its creation in the 1970′s to the recent enhancements. My conclusion was that the conventional wisdom had been correct but progressive enhancements by Intel and AMD have finally resulted into something console programmers can embrace.

“And then I started thinking. I just sacrificed my holiday to investigate some philosophical points of a console that I am not really assigned to be working on and won’t be releasing for another 5 years. That’s passion, that’s enthusiasm and maybe I should consider working on this project more deeply.”

It seems that Cerny has came a long way working for Sony. He then goes on to tell the story of how how he met Shuhei Yoshida and Masa Chitani, then how he came to be the lead system architect.

Watch the event below; and tell us what you think: 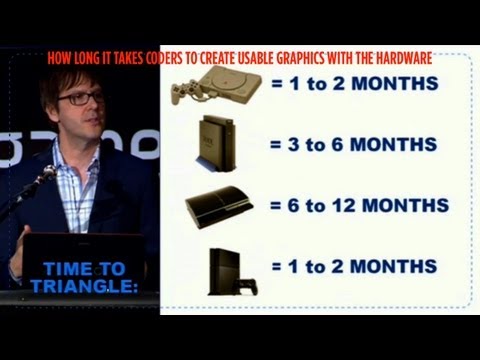