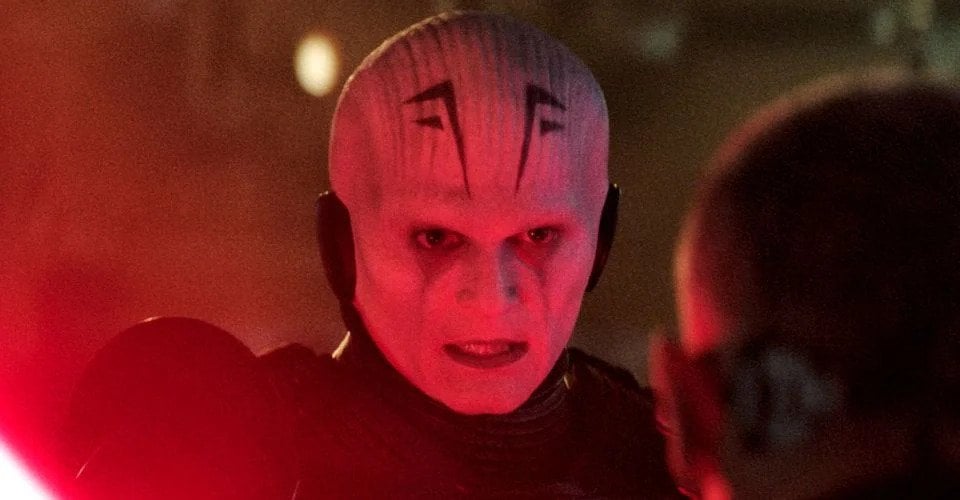 Making his first appearance in the animated TV show ‘Star Wars Rebels’, The Grand Inquisitor is a fallen Jedi manipulated by Emperor Palpatine and trained by Darth Vader himself to realise the full potential of Order 66.

Star Wars Rebels covers the early days of the Rebellion, most specifically the adventures of Ezra Bridger and Kanan Jarrus who managed to avoid the repercussions of Order 66. The two Jedi are just a small part of a small rebel cell that will eventually join the bigger rebellion effort that features in the original Star Wars trilogy.

A former Jedi Temple guard, The Grand Inquisitor went from a mask-wearing, yellow dual-bladed lightsaber guardian to Jedi hunter due to falling out of favour with Jedi ideals shortly before the Clone Wars began. Born on Utapau, the Pau’an male was turned to the dark side by Emperor Palpatine to head up the Inquisitorius.

Dubbed the ‘Grand Inquisitor’ by Palpatine, the fallen Jedi would not only hunt down Jedi but turn them into Inquisitor brothers and sisters. This form of twisted recruitment can be seen in the game Jedi: Fallen Order, which shows allows players to head to the underwater Fortress Inquisitorius on the Mustafarian moon of Nur.

This is the same base that can be seen in the Obi-Wan Kenobi trailer, for our full breakdown click here. In the season one finale, The Grand Inquisitor surrenders in battle and allows himself to fall into the Sovereign ship generator. Knowing that his punishment from Death Vader for failing would be worse than death, he states the following before plunging to his death:

“You have no idea what you’ve unleashed here today. There are some things far more frightening than death.”

The Grand Inquisitor is dead by the time Star Wars: A New Hope rolls around, which is also the grounding moment for Star Wars dates and events. The Death Star battle seen in episode IV is called “The Battle of Yavin”, considering this turning point in rebel strength was fought over Yavin.

Episode III – Revenge of the Sith took place in 19 BBY, with the events of Star Wars Rebels taking place between 5 BBY and 1BBY. This means the first appearance of The Grand Inquisitor as far as TV and Film cannon is concerned is 5 BBY, but he shows up in the Obi-Wan Kenobi trailer, right?

Making his timeline accurate debut into the Star Wars canon, the Grand Inquisitor is found in the fallen Jedi Temple archives by Emperor Palpatine and Darth Vader. In the “Darth Vader: Dark Lord of the Sith: The Chosen One Part VI”, Vader is attacked by the Grand Inquisitor who is easily defeated in a lightsaber battle.

Palpatine spots an opportunity and introduces Darth Vader, taking them to the shadow of Coruscaunts Industrial District. This is the old lair of Palpatine/Sidious, repurposed into the new headquarters for the newly formed Imperial Inquisition. The Grand Inquisitor and fellow brothers and sisters are then trained by Darth Vader and begin their hunt of Jedi, realising the full vision of Order 66. Well, kind of.

Obi-Wan Kenobi is a six-episode limited series that will begin airing on the anniversary of Star Wars: A New Hope’s theatrical debut on 25th May 2022. Filling the gap on the Jedi Masters activities between Revenge of the Sith and A New Hope, it also sees the return of Hayden Christensen as Darth Vader and possibly Ian McDiarmid reprising his role as Sheev Palpatine once again.

Enjoying our Star Wars content? Make sure to check out some of the best lore, trailer breakdowns and reviews right here.