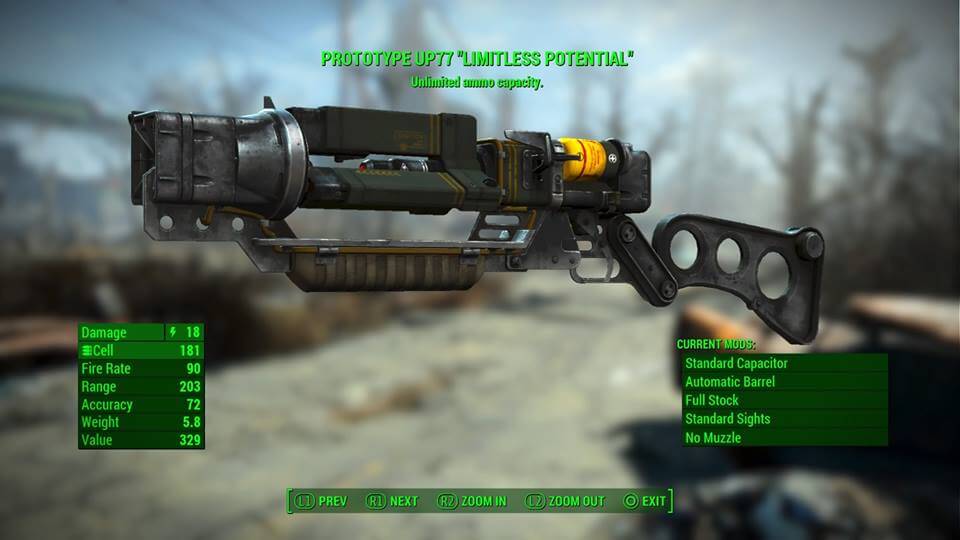 The Wasteland is a dangerous place, especially for Vault Dwellers. With so many dangerous encounters waiting to happen, ammo for you weapon can be the difference between life and death.

Fret not though, we at Fragburn take your safety very seriously and hence have come up with this handy guide which will guarantee you’ve a weapon with unlimited ammo capacity, raising your chances of survival that much higher.

Fallout 4 is a huge game, it didn’t take the developers years to create if they were planning to include only a few things. They’ve done their best to ensure you have as much content as possible and when it comes to weapons, it’s the same.

There’s so many weapons for you to acquire and discover, ranging from the default drops, to unique ones and going as far as the fabled Legendary weapons. You’ll never run out of options.

Legendary weapons also come with their own unique buffs, one of which is called the “Never Ending” buff. This means that you’ll never need to reload your weapon if its imbued with this buff. However, finding Legendary weapons boils down to pure luck and occurs at random and hence it’s difficult to predict when if at all you’ll find such a weapon.

Fret not though, there’s actually a weapon in the game which has the unlimited ammo capacity buff and it isn’t a random drop either. Yeah, it’s not a walk in the park to get to such an epic weapon but that’s where we come in. We’ve made this handy guide which will make this a walk in the park (more or less).

Where to find the Prototype Up77 Limitless Potential

You need to move to University Point and do a quick recon of the place. It’s a massive area in itself but your point of interest is a bank. Once you get there, do not use the main entrance to enter the bank. Go to the left instead and around into a restaurant which has one or two dead customers lying around.

Now that you’re here, look around and you should see a terminal and a steel door leading to the University Credit Union.

Don’t try to open the door just yet, instead climb up two flights of stairs to the top floor and look for a terminal which should be placed at a desk. Upon finding it, read all the Mayor’s notes on the computer and you should find “Gerald’s Vault” password. Great, this will come in handy later on.

Once you have the code, go back downstairs and crack the terminal to enter the bank. Once you’re inside, climb down a flight of stairs leading to the vault. Here you’ll need to use the password you found earlier in order to open it and marvel at the look inside.

There should be two safes on the wall to your right. In order to crack them open, you’ll be needing Master and Advanced lock picking skills respectively. Crack them open and there should be a ton of ammo of various weapon types. Enjoy.

However, these aren’t what we’re looking for. The safe you really need should be in front of you. You’ll need Master lock picking skills to crack it open and once you do, you’ll find a big red button. Press that and a hidden door will open up for you on the wall to your right.

The room’s a secret lab and it has the Prototype Up77 – A Limitless Potential Laser rifle.

This has unlimited ammo capacity and you can also mod it to improve its performance. The lab also has a weapons bench so if your science Perk is high enough, you can get to work here itself to improve the weapon.

This weapon isn’t fooling around either as it’s truly unlimited when it comes to its ammo capacity. This means you can keep on blasting those fusion cells till you’re fully out of ammo.

There’s no need to reload in between fights. It can be deadly if you mod it right and can come in real handy during intense battles.