If you’re looking for a fast paced shooter that’s also free-to-play then look no further. Loadout has been announced for the PlayStation 4 and it will allow you to build the gun of your dreams. Check out the latest screenshots, trailer and video game details now.

The upcoming Loadout video game is being brought out by Edge of Reality. This is a completely free-to-play video game but the highlight of this title is the ability to really make the gun of your dreams. According to Mark Nau, creative director at Edge of Reality, there are literally “billions” of different weapon combinations.

“Loadout is a game that lets you concoct the weapon of your dreams and/or nightmares from hundreds of component parts, and share their payloads with your friends in fast-paced matches, with violently comedic results. Giant death beam? We’ve got it covered. Bouncy Tesla balls? Sure. Laser-guided cluster-bomb rockets? Hey, we’re not here to judge.

Loadout has literally billions of different weapon combinations, and you can wield every last one of them once we launch on PS4. We’re going to be adjusting all the scopes and balancing the barrels so your weapons of choice feel right at home on DualShock 4.

Putting a visually unique game like Loadout on PS4 is a treat for us. The sprawling levels and bombastic characters look as glorious and murderable as ever! When you shoot someone in Loadout, you know it and they know it: limbs and heads sever, gaping holes display the delightfully shiny organs within, and flesh burns to a well-done crisp. The lavish animation and art will be right at home on PS4.”

For now, there is no specific released date announced as of yet but feel free to check out the latest screenshots and trailer. 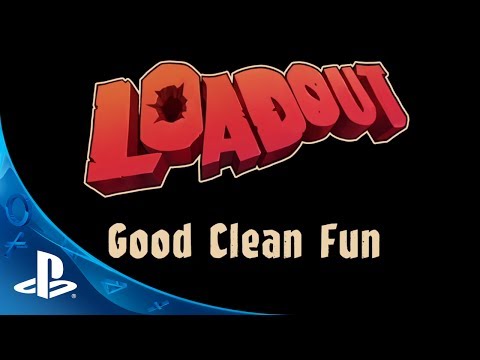