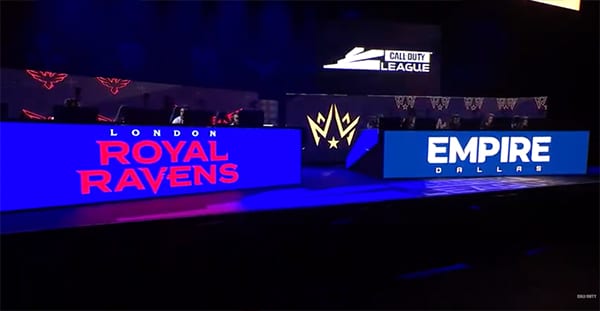 Call of Duty League 2020 kicked off on the 24th January in Minnesota for its inaugural season. The franchised league is made up of 12 teams from 11 different cities, with playoffs happening in American and Europe.

The London Home Series event at Olympic Park on the 8th and 9th February featured only 8 of the 12 franchised teams but that didn’t mean for one second that the excitement and action were less.

The London Royal Ravens found themselves in the semi-final against Dallas Empire and you could tell the crowd were eagerly awaiting to see the two teams fight. The twin threats Wuskin and Skrapz absolutely dominated the first match with Rated driving forward the Hardpoint win.

Rated also brought in an electric win in the final round of Search and Destroy at the 5-5 matchpoint mark early on, being dubbed (rightfully so) the “guardian angel” by the casting team. Going 5-5 in New Hardpoint took the semi to a tie-breaker to be fought out in Gun Runner in Piccadilly.

Could the Royal Ravens get the win on home turf AND a home map? Sadly not. They were defeated by Dallas Empire after a hard-fought battle. They went 4-6 in round 10 of Search and Destroy with the win just slipping away.

In earlier matches, the Chicago Huntsmen and London Royal Ravens both went 2-0 on the 8th to secure their places in the brackets. Royal Ravens on Day 1 in the Copper Box Arena secured a huge win with their reverse sweep against the New York Subliners in Group B. The Subliners won Hardpoint and Search & Destroy but that was not enough. The Ravens turned up the heat with a Domination, Hardpoint and Gun Runner Search & Destroy win. This automatically locked down their spot in the Sunday brackets alongside the undefeated Huntsmen.

It was not a good weekend for the Subliners as they then ended up being dominated by underdogs Paris Legion and losing out on their chance to make it to the semi-finals. It was epic to see Legion dominate with a straight 3-0 win over the Subliners, seeing 6 consecutive round wins in Search & Destroy.

London Royal Ravens vs. Toronto Ultra (Group B)
London won again with a 3-1 lead, commanding control over Toronto through Hardpoint, Search & Destroy and Azhir Cave Hardpoint. The closest round was Rammaza Hardpoint 250-221 and it was only Gun Runner Domination that the Ravens succumbed in.

What Were the CDL Points Standings Following January Minnesota Weekend?

Teams from both ends of the popularity contest proved that power rankings don’t mean everything coming into CDL.

About Call of Duty League 2020

Activision Blizzard’s CDL runs from Jan-July 2020 and will be hosted around the world. The host cities have the option to host additional events for amateurs and the like aside from the official league tournaments. Each team paid $25 million to be part of the franchise with a $6 million prize pool. It’s good to hear also that this league is supporting its players with rulings of a $50,000 base salary along with healthcare and retirement benefits.

5 maps are played in rotation: Hardpoint, Search & Destroy and Domination:

The CDL points system is as follows:

You can support your fave team with in-game CDL skins.

Who are the London Royal Ravens?

Official British team for the CDL, the Royal Ravens feature an impressive roster of twin brothers Wuskin and Skrapz, MadCat, Rated, Dylan, Jurd. They are the first team in CDL to go 4-0 in best of 5s.

What is a Call of Duty League Hype Battle?

Hype Battle is a fresh new game mode that features celebrities in a 2v2 Gunfight mode with a paired pro player. Royal Ravens became first ever CoD League Hype Battle Champions at the February London Home Series event with a roster of MadCat and DJ Nicky Romero bringing in the win against Subliners’ Censor and Jamaal Lascelles.

Of course with the first played Hype Battle of CDL 2020 being played on home soil, I was super psyched to see Royal Ravens destroying Subliners’ Censor, firmly cementing London’s domination over New York this weekend. See how the hype battle played out:

4 kills for Nicky, 8 for MadCat

It was hard not to be a Romero fan after watching his casual cool demeanour on stage whilst wiping the floor with Subliners. MadCat even said “he could play CoD professionally with Censor playing professionally” – just giving a little stab at Censor for his weak performance in the Hype. It will be interesting to see what happens next time!

Audiences To Return For Upcoming Call Of Duty League Tournament