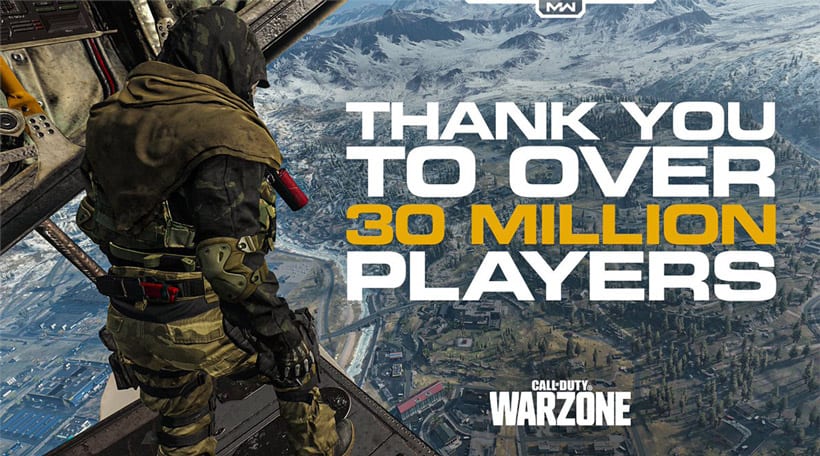 Coronavirus has pushed more gamers to work from home, and that fact coupled with Warzone being a genuinely fresh take on battle royale means Activision get to celebrate as their newest game mode now has over 30 million players.

Call of Duty’s Warzone launched on March 10 2020 and many have since speculated that its popularity will bring the demise of other online battle royale games like Apex Legends and Fortnite.

Call of Duty Modern Warfare launched October 25 2019 and by two months later in December 2019, it had already become the most successful iteration in the series for Activision within this gaming generation (according to Metro).

How Many Players Does Call of Duty Warzone Have?

Within 24 hours, Warzone already had 6 million players and then went on to secure an additional 9 million by just four days later. The recorded number of 30 million players was noted on March 20 so the player base is guaranteed to have soared greater than that by now.

It’s no surprise that Warzone has rightly been dubbed by many as “the fastest growing non-mobile game”. You can read more about Call of Duty Warzone smashing records over on GameByte.com.

Warzone is a fresh new take on battle royale that’s played within the popular base game Call of Duty Modern Warfare. This new online shooter is free to play, even if you don’t already own a copy of Modern Warfare.

Warzone comes with two exhilarating 150-player game modes at launch: in plunder it’s a race to see who can collect $1million first, whilst in the standard battle royale game mode it’s all about survival. A solo game mode has since been added to Warzone, so it’s perfect for you if you’re sick of your squad always being off looting elsewhere when you need them.

What Makes Warzone Different to Other Battle Royales?

Call of Duty’s Warzone isn’t just a game that all comes down to the final moments. Warzone is a game based around strategy, looting and completing contracts. Having the manhunt feature against other players will reveal their location on the map, giving Warzone an increased competitive edge.

My personal favourite feature about Warzone is that it even makes dying fun. In Call of Duty’s Warzone, if you die you’re given a chance to 1v1 against another player in the Gulag prison setting to win back your place in the main game. Other teammates can also spend their in-game cash at Buy Back Stations for a hefty price if you really are worth it.

And anyway, what other battle royales have given you hours of fun AND free pizza?

According to Activision, when playing Call of Duty battle royale Warzone as a solo player against 149 others, “the last operator standing wins”.

Think of this as Free-For-All in a traditional Call of Duty game, but on a massive scale.