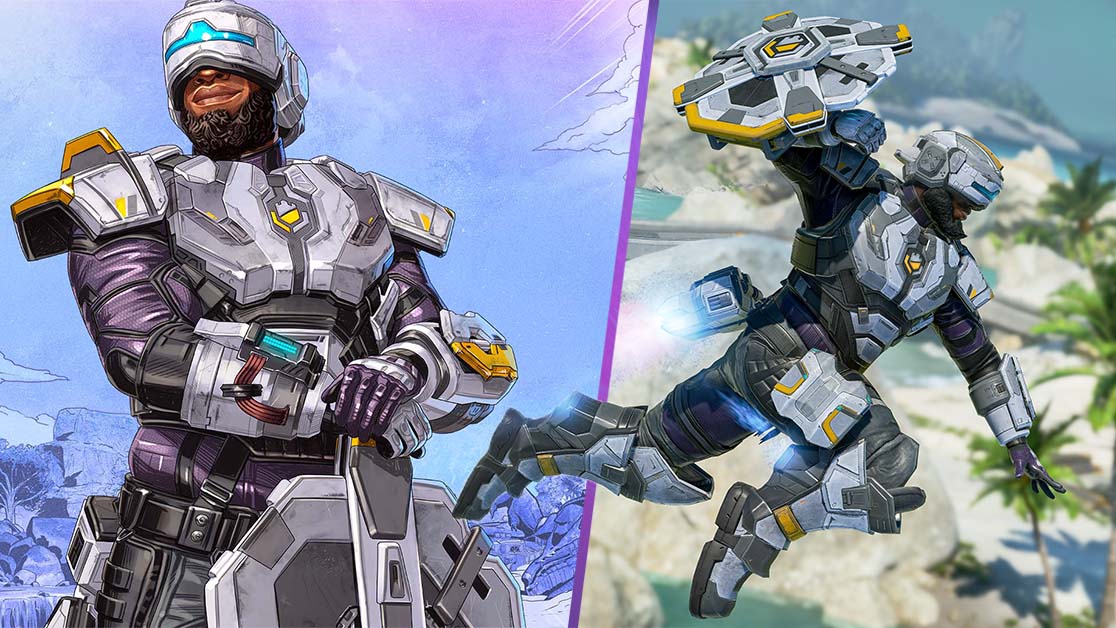 Apex Legends continues to impress its player base with continuous, huge updates to its core gameplay mechanics. The release date of Apex Legends Season 13, dubbed ‘Saviours’ is set to shift the tide once again, introducing a Legend with a unique aggressive support role – Newcastle.

So, what is the release date for Newcastle in Apex Legends, and what are his abilities all about?

A little storytime before we dive into what makes this new Legend tick. Newcastle is actually the long-lost brother of Bangalore, one of the original Legends in the Apex games. He’s been trying to win himself a place in the games for ages, and has now successfully landed himself in the fray.

He has a defensive playstyle, but is also capable of being aggressive at the same time. Give his trailer a watch for yourself below!

As the 20th Legend arriving in Apex, you’d think that Newcastle would have a hard time making his abilities stand out. That’s not the case, however. It’s been a while since we last saw a new support character in the Apex games, but Newcastle is here to end that streak.

Let’s take a look at his abilities:

On Newcastle’s wrist, you’ll find a portable shield. This is similar to the knockdown shield that players can deploy when they’re in a down-but-not-out state. When Newcastle is reviving a teammate, he deploys this shield to defend from incoming fire. This allows him to revive fallen team members even in the heat of battle.

But that’s not all – Newcastle can also drag fallen teammates around while reviving them. We all have that one teammate who ends up getting downed in the middle of an open field. With Newcastle in your squad, you now have a chance to revive them while pulling them to safety.

What’s great about this passive is that it’s actually powered by Newcastle’s knockdown shield. This further incentives you to hunt down high tier knockdown shields and means that the ability scales with power as the game progresses.

Newcastle’s next ability is his Mobile Shield. This is a hovering energy shield that can be moved and manipulated according to the player. Newcastle can deploy this wherever he likes, and at whichever angle he chooses. He can then recall it and place it down elsewhere, making it extremely versatile in a firefight.

The shield is split into two halves, top and bottom. Enemy teams can run down each portion separately, deciding if they want to aim for the head or for the legs. Oh, and because the shield is energy based, players can run through it. This creates opportunities to peek through shields to get some sneaky shots before retreating back into cover.

There are two halves to Newcastle’s ultimate ability. Upon activation, Newcastle will leap into the air at either a great height or great distance – the player can control this by aiming their camera. Newcastle then slams down to the ground, knocking back enemies in the rough area.

Once Newcastle reaches the ground, he begins to construct a huge ‘castle’ wall that acts as a physical shield for players to hide behind. There are cutouts for the team to shoot through, so it’s intended to encourage teams to play together.

If the team isn’t together, that’s where the passive part of the ultimate comes into play. When aiming at a friendly squadmate, Newcastle’s jump ability is buffed, allowing him to jump further than before.

All things considered, Newcastle’s abilities make him one of the best yet for team play in Apex Legends.

So, when can players get their hands on the Newcastle Legend? The release date for Newcastle in Apex Legends is currently set for May 10th. It’s then that Season 13, dubbed ‘Saviours’, will release to the public.

Season 13 also brings with it a bunch of changes to the Stormpoint map. One of the biggest changes is the massive fallen Kaiju that now resides to the south of the map. Players are able to explore inside and on top of the carcass – in fact, that’s where you’ll find some of the game’s best loot.

Will you be playing as Newcastle in Apex Legends when the release date arrives? Let us know across our social channels.