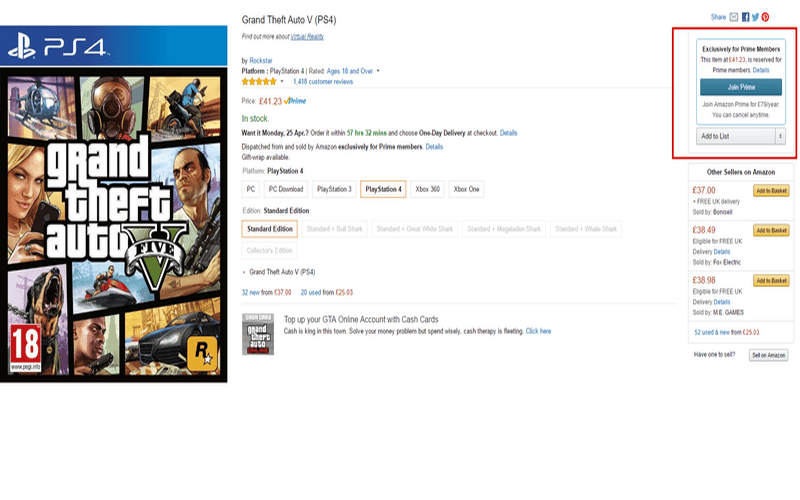 Amazon has implemented a move that might not go down too well with gamers. You now need a Prime membership in order to buy popular games such as FIFA 16, Grand Theft Auto V and Minecraft directly from the retailer.

The change seems to have been put in effect overnight and several readers have sent us screenshots about the same. However, before you hit the panic button (if there ever is one) you need to know that there’s a workaround to this.

In principle, you can still purchase all of the above games on the website via third-party sellers irrespective of having a prime subscription. Since Amazon primarily uses third-party retailers, not much will change for now and the effects will only be noticed sparingly by customers.

However, this is a ominous sign since this might just be a test by Amazon and it might eventually turn into a more extensive practice with some games being completely locked in behind Amazon Prime. Now that would be a problem.

Several games have been put inside this scheme by Amazon at this moment including hit titles such as Metal Gear Solid: Ground Zeroes, Battlefield: Hardline, Far Cry: Primal and  Assassin’s Creed: Syndicate.

One of the many benefits of Amazon Prime is access to exclusive selection on a number of great products. Customers who are not Prime members can sign-up for a 30-day free trial of Amazon Prime, or they can purchase those items from a Marketplace seller.

Currently a Amazon prime subscription costs $99 per year and this is a worrying sign indeed. Are we close to having many games sold on the website locked inside this scheme soon?