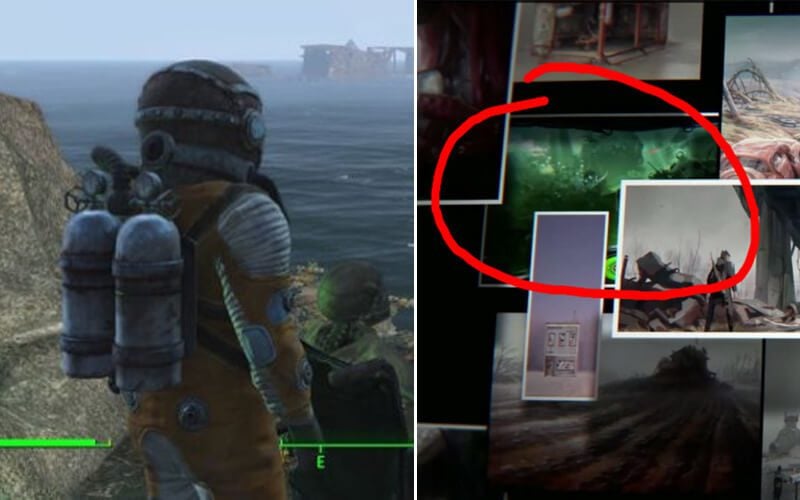 If you’ve been paying attention to the clues that Bethesda has been dropping, it’s not a huge leap to come to the conclusion that the first DLC could very likely be an underwater explorable area.

Don’t hold your breath just yet, but take a look at these hints…

For starters, there’s a power armor hidden underwater. Seasoned wasteland explorers may have already found it, but if you missed it: Here’s how to find the underwater power armor in Fallout 4.

Granted, just because there’s a hidden item in the water, that doesn’t really confirm any speculation. Thankfully, there are more clues, and the breadcrumb trail continues…

There’s a hidden weapon that a modder found in the source code, and with some clever tweaking he was able to make it available to PC players. It’s a harpoon, and it shoots bubbles.

The aforementioned clues were in the game’s code itself, but here are some hints that were in the early concept art that we saw shortly after Fallout 4 was originally announced. Hidden armor and harpoons are compelling evidence because they actually exist…

Here’s a third-person view of somebody exploring the depths of the dark sea:

The player arrives at the coast, now there’s nowhere else to go but in:

There are two likely outcomes here. Either more underwater content was originally planned for the main game and was scrapped during development, leaving behind these remnants… or we’re about to get our socks wet with some new underwater DLC.