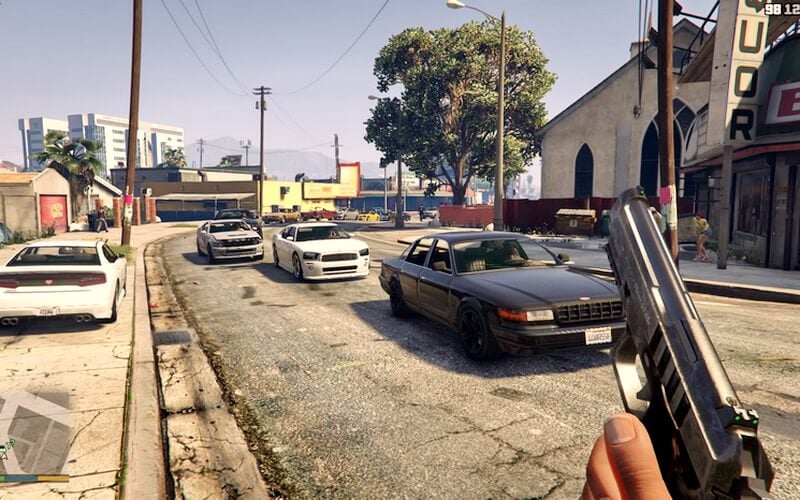 Insanity is a funny little thing, something that can’t be properly diagnosed, treated or prevented. In the real world, mental stability is something you want to hold on to, in video games, bring on the crazy.

This is our list of the top six mentally unstable video game characters.

The Psychos – The Borderlands Franchise

It doesn’t take a genius to realize that nobody is sane in these dusty wastelands. Even the playable characters, the protagonists themselves have their crazy moments. Hell, Borderlands is just crazy as a whole.

But when weighing up the colorful characters of the franchise, my first initial thought was Tiny Tina, after all she’s a thirteen year old girl who just so happens to be an expert in demolitions and hosting fatal tea parties.

However, while pondering on her story, it could be argued that the fact her parents were murdered before her sent her over the edge, so with that in mind, I declare the psychos of king crazy.

In no way are the psychos in line for the hardest or most memorable enemies of the Borderlands franchise, but they are plain nuts. They will fearlessly charge you, wielding a buzzsaw axe while shouting complete gibberish such as:

‘I need another head for my merry go round, yours is perfect!’

‘I wonder if I plant you in the ground, if you’ll grow taller?’

and my personal favorite;

These are just a few of the many quotes said by psychos, and if you haven’t gathered by now, there’s more than a few screws loose.

Every villain Batman gloriously pummels is at least a little crazy (maybe it’s all the head trauma Bruce?), but among the roost, Scarecrow stands tall above them all.

A very close tie with the Joker, Scarecrow uses the power of fear as a weapon, similar to Batman but instead of non-lethal beat downs, Scarecrow scares you into killing each other. You know, just your average stand up guy.

What puts Scarecrow (or Dr. Jonathan Crane) on this list is his fear toxin. Fine tuned for the best results, he manipulates people through the toxin, which is administered via a Freddy Krueger style glove, replacing the blades for needles, or if he gets inventive, the Cloudburst bomb which fills the air with the toxin.

Everything about Scarecrow defines insanity, his appearance, his methods and his execution. What makes him such an adversary for Batman is the fact he can get to Wayne like no other villain can, projecting intense visions to him, such as his murdered parents or the Scarecrow sequences in Arkham Asylum which had us hiding away from a 200 foot tall Scarecrow.

Far Cry 3 is quite possibly one of the greatest games I’ve ever had the pleasure to play. Insanity is the main theme of the game, that, and taking recreational drugs. And of course I’m going to mention burning a farm of weed while Skrillex drops the bass.

So it only seems fitting with a game so crazy to have an antagonist to match the theme, which Ubisoft delivered. We’re introduced to Vaas Montenegro from the very beginning as he has the player locked in a cage gloating about who’s top dog in these lands.

While he doesn’t show up as much as we’d like him to, the few times we come toe to toe with him are memorable to say the least.

His dialogue, while colorful, is easy to relate to which really strikes a chord within the player and further extends his crazy status. Vaas is a brutal adversary in his methods, but there’s something about him that draws our attention and in the end, you won’t want to kill him. I’ll do such a great character some justice and not mention his disappointing end.

Tingle – The Legend of Zelda Franchise

Just writing about Tingle is grinding on me. Definitely, the most annoying character on the list, Tingle is a… questionable choice of design in a game for kids.

First appearing in Majora’s Mask, Tingle is a thirty-five year old man who is obsessed with forest fairies and imitates Links choice of clothing. I don’t think he quite pulls it off. The flamboyant cartographer appears in multiple LOZ titles (unfortunately), dancing his way through annoying dialogue and his trademark ‘Kooloo-Limpah’, which we didn’t get sick of hearing in Majora’s Mask at all.

His clothing, his obsession with fairies to the point of wanting to be one, magic words and befriending a young boy, along with the fact in the Windwaker he has two minions spinning Tingle Tower (oh god, he has a tower now), this guy clearly needs to be locked up. PLEASE.

Side note: If you search for Tingle on google images, make sure your safesearch is set to strict. There’s some weird people out there.

The Metal Gear franchise is home to many colorful characters, especially within boss fights, it’s almost become the trademark for Metal Gear. The first in the franchise changed pace upon fighting Psycho Mantis however, swapping the action for some lateral thinking.

Sporting a gas mask and a skin tight outfit, it all adds to his creepy persona. His haunting voice, ability to levitate and the fact he can’t be damaged by conventional means, it’s no surprise he’s one of the most memorable characters within the game.

Armed with the ability to read players memory cards and openly state what they’ve been playing, fighting him was a complete mindf**k, to say the least. The trick to beating Psycho Mantis was to unplug your controller from port one and into port two, that way he can’t predict Snake’s next move.

Something so simple yet unorthodox was never heard of back in the early days of gaming and we have yet to meet an opponent who could mess with us as much as Phycho Mantis did.

Ah come on, you knew he’d be here. If you’ve never played GTA V, in which case I’d advise you to crawl out of the cave you’re living in, you’re missing out on possibly the most lovable psycho ever.

It could be his trailer trash look, murderous tendencies or just his appetite for human flesh, Trevor is I.N.S.A.N.E. This is shown consistently throughout the game, for example, if you switch to Trevor mid-game, you’ll spawn as him during random events.

Sometimes he could be chasing a group of cyclists while expressing his views about pedal bikes on the road, or maybe you’ll start as him waking up drunk while wearing a dress. Even the controversial torture scene was conducted while playing as Trevor, which he obviously enjoyed.

With all this mentioned, he’s still a relatively good guy at heart for those who mean something to him. We see he is capable of compassion, love and jealousy, like any other human being. He takes his role as an uncle seriously and cuts down anyone who threatens his family and surprisingly, Micheal too, even after he learns the truth about the past.

So you just went through the arena in Oblivion, you’re covered in blood, some of it yours, some of it not. You wash yourself, regain all your health and await the masses of crowds awaiting to see the new grand champion. You leave the stadium and you’re greeted to…

This goddamn face. Look at it. Here’s your reward. A young, annoying wood elf. His stupid hair, stupid eyebrows and that sh*t eating grin, you’ll regret overcoming the opposition, just go back in and ask to be beaten to a pulp to rid yourself of the disease that is this adoring fan.

So yeah, he’s wildly annoying, what makes him crazy? Well, he’s obsessive as hell. He follows you everywhere, which is expected from a ‘companion’, even though he refuses to engage in combat. He will put himself in danger to be around you, trust you to protect his life and follow you into the deepest, darkest caves. Hell I’m pretty sure this guy can follow you through a portal into Oblivion.

Despite the fact he’s obsessed with the player, in Elder Scrolls V: Skyrim, during the dark brotherhood questline you can stumble upon a book named “Cicero’s Journal Vol. 1”. If you missed this, or if you’re like me and couldn’t be bothered reading every scrap of paper you find, the journal reveals a hidden secret about our friend. It turns out Cicero is an assassin who disguised himself as an arena fan in an attempt to kill the Grand Champion while walking through a forest. That sneaky little bugger.

So this was our list of mentally unstable characters in video games, did we miss someone you think should be in the loony bin? Let us know in the comments section.