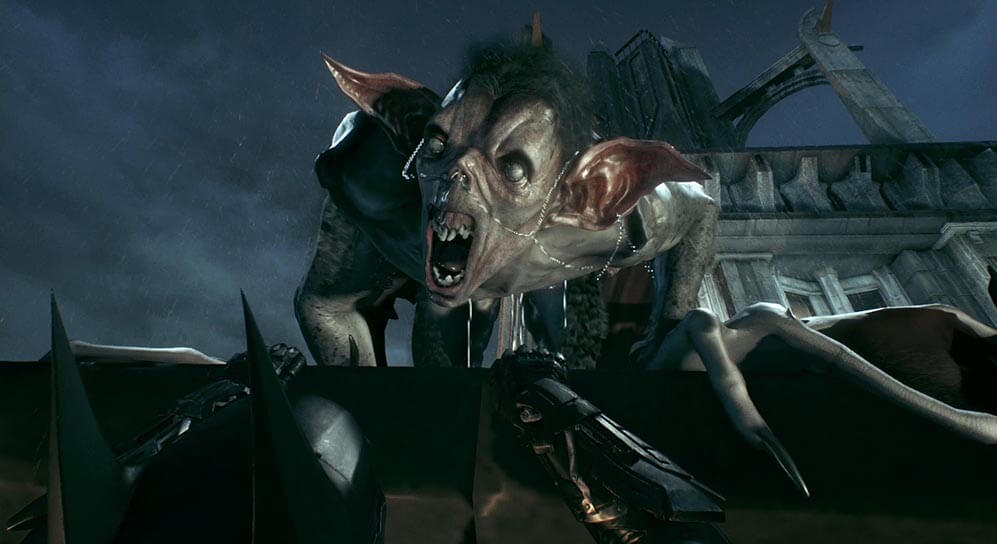 Some games can evoke emotions so powerful, that they actually elicit a physical fight or flight response in the player.

Ocarina of Time – Gohma
In the pantheon of Zelda bosses, Gohma isn’t much to write home about. Giant spider, stab the eye – it’s nothing special. But Gohma’s appearance is Ocarina of Time was many player’s first foray into the epic boss fights of the Zelda series.

The first time you step into that seemingly empty room and the door slams shut behind you, you know something big is about to happen. And when you hear the scuttling noise of a giant spider, but it’s nowhere to be seen, the tension is ratcheted up to 10. Then when you finally make eye contact and Gohma – ten times your size – drops down to face you… a lot of 10 year olds in 1998 had to turn the game off and continue playing in the morning when the daylight made things seem safer.

In a series as lighthearted and fun as Crash Bandicoot, it was extremely jarring when giant monster started chasing you down the map. The look on Crash’s face perfectly mimicked every child’s face that was controlling him, because these were high anxiety levels. The most memorable was the polar bear that chased you through Crash 2. It never seemed far away enough for comfort, which always meant one false move meant death. The calm moments after passing the level always came with a realization of how fast your heart was just beating.

It’s hard to think of a more lighthearted series than Paper Mario. That’s why Mimi was so pulse-pounding. We’ve written before about the Paper Mario series’ dark Easter egg, but Mimi is the real terror in the series. A giant spider demon that cannot be hurt, cannot be stopped, and can chase you through dimensions? Yep, all the checkmarks of an absolute nightmare.

Eternal Darkness is an overlooked Gamecube gem. A horror pioneer, the game featured a unique Sanity Meter that would trigger a Sanity Effect – which was a moment of pure terror for your character and yourself alike. The true hair-on-end moments of the game come from knowing your sanity meter is low, and trying to anticipate what sort of mind-melting scenario you would be subjected to. That was always a losing prospect, because it could be anything from your character’s head falling off and reciting Shakespeare, to the game pretending to delete all your save files.

It’s difficult for a game to make you anxious when you’re playing as Batman, the baddest dude around. But Arkham Knight pulls off the tension with Man Bat. After you first see him while scaling a building, your body tenses up every time you need to climb up to a roof after that, knowing he could be there waiting to jump out and terrorize you with his looks and ridiculously lazy name.

All throughout Gears Of War’s ridiculously macho game of Wac-A-Mole, you feel like an almost indestructible war machine. Thousands of Locusts had died at your hands and thousands more would die before you were done. And then the game throws a Berserker at you. Bullets were useless. Your chainsaw was useless. If she caught you it was over, and she was fast. Unfortunately, the only thing to do was to make her follow you. Nothing more emasculating controlling Dom and being terrified of a Locust.

Before it was an underrated 3DS game, Luigi’s Mansion was a fantastic Gamecube game. And let’s just get this out of the way – Luigi’s Mansion is not a scary game. Most kids going into the game were aware of what they were in for. But one moment that definitely increased some heart rates was the demonic voice that bellows “NINTENDO” when you first load the game. Every other Nintendo game booted up with smiles and love, but Luigi’s Mansion booted up from the seventh circle of Hell.

Your first playthrough of the original Pokemon games is something that is likely cemented in your memory. And with that comes the feeling of dread that accompanies the music from Lavender Town. From the moment you step out of Rock Tunnel into Lavender Town, you know something is wrong. Being 8 years old and trying to endure that music AND the town’s ghosts was a tall order in 1996. Nobody would blame you for turning the volume off.

One of the best games you can beat in a day, Limbo is a game soaked in atmosphere. The black and white style lends it an otherworldly feel. But a real edge-of-your-seat panic moment was the giant spider that stalked you an entire level. What really sets the hairs on the back of your neck up is the fact that the spider made no noise, you just saw the giant legs creeping onto your screen while you ran as fast as you could.

Metal Gear Solid boss fights are legendary. Going into a MGS boss fight could be a 4 hour commitment. Big Boss from MGS 3 was comparatively short by Metal Gear standards, but it is unrivaled in terms of tension. Knowing what she means to Snake, and what she likely meant to the player by the time you had to kill her, this was a confusing and anxiety riddled fight.