Looking for a zombie themed runner title for the PS Vita? Take a look at the launch trailer for Z-Run on the PS Vita.

Z-Run is exclusive to the PlayStation Vita and it’s available right now. Alexey Menshikov, founder and CEO of Beatshapers released the following on the PlayStation Blog.

Z-Run thrusts you into a world that has fundamentally been overrun by a virus that has mutated people into flesh eating zombies that will do anything for their next meal.

Z-Run includes two game modes including a story and a survival mode, with the story mode seeing your chosen character attempting to escape the city one level at a time, while the survival mode tasks you to hold out for as long as you possibly can against the hordes of zombies with gradually increasing quantities of obstacles and zombies.

The weapons range from blunt weapons to firearms and blades. The blunt weapons consist of tubes, planks, baseball bats, and more besides, although they are categorized as expendable blunt weapons as they will degrade and break down into an unusable state after they have been used a few times, depending upon the weapon.

The firearms consist of handguns, a shotgun, and a crossbow, and are a great tactic for instantly dispensing of zombies that will use very little stamina, although the firearms do require ammo which can be collected during levels, while reloading will be performed automatically depending upon if you have any ammo left after the clip has run dry.

Blades consist of a katana and tanto, which are far more durable than the blunt weapons resulting in a larger period of time before the bladed weapon degrades into an unusable state. 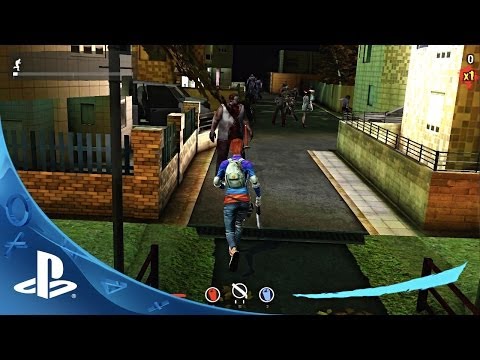