The PlayStation 4 certainly launched with much fan fare and has proved to be a roaring success for Sony, selling a whopping 4 million + units in its first month of launch. A dream come true for any company to taste this kind of success.

However, it’s success which has been hard fought and earned by the company. Sony not only listened to what gamers wanted worldwide but also made sure that they implemented them on its new system, ensuring a positive response.

It’s because of its great interaction with the community that we feel that the PS4 will only grow stronger with time, but like any new product, there remains a few issues with the system which can prove to be an annoyance at times.

One of the bigger issues that the console is facing right now is the inability to queue or pause your downloads, which often results in a lot of files being downloaded at once and also loss of data in case of network failure and a power cut.

But thankfully, there’s a nice workaround which should make life easier for PS4 owners until Sony releases a firmware update introducing the feature and rest assured that it’ll do that soon.

Youtube User Hackastic has made this handy guide which shows you how you can workaround the inability to pause downloads on the device and we’ve tested it out and it works 8 out 10 times. Only occasionally will the file become corrupted but you should be fine using it more often than not.

Another more simpler way is to go to the network page of your console and click on ‘Test Internet Connection’ option, this’ll force stop all current downloads too.

You can watch the video below and we hope the guide proves to be useful for you. 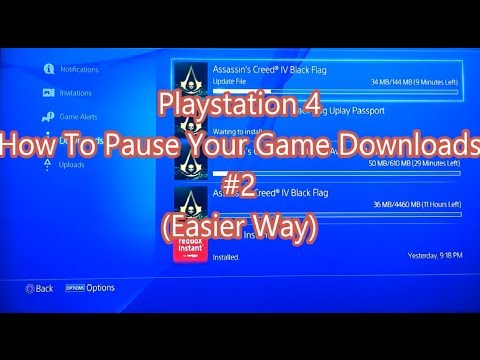 It’s great to see the community coming forward to help people workaround some minor hiccups that the PS4 is facing currently. We’re sure Sony will be addressing this issue sooner than later. Till than you can use this handy method to queue and pause downloads on the system.

Got anything to add? The comments are open for you to discuss. Stay tuned to PS Gang to get the most updated feed for PS4 content.