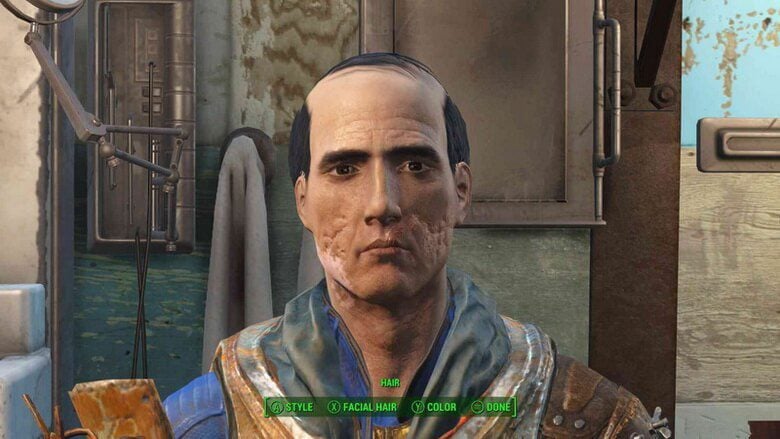 Aaarghh! I scream as the drug fills my veins. Then my arms feel stronger, I need to hit something. These are my characters thoughts as I dose him with another Psycho chem.

Alongside Psycho, we have Buffout, Jet, Med-X and my favourite chem of choice; something only known as a Mysterious Serum. Upon taking any of these drugs I can become abnormally capable in any sticky situation.

My personal favourite, the Mysterious Serum.

The Chem is a post-apocalyptic slang word used for drug or medicinal substance.

Like many of you reading this, I’ve sunk many hours wandering the bleak wastelands of Fallout 4. Along my way I’ve dabbled in several different chems and beverages; some that seem to strengthen my character beyond his limits and others that can even slow down time itself, however the consequences don’t all sound to be that bad.

“So many chems, such varieties! Whenever I take Mentats, I can feel my entire chassis breeeeeathe like a big spherical lung.*coughs*”

My drug addiction takes its toll.

Each drug shot and drink chugged has a different effect, the most common chems found are;

These drugs can be crafted into mixes of one another for example Psychojet, giving you the stat boost of the pyscho but also slowing down time.

Abusing this power can lead down a dark road. As you can see from the image above my character has taken a notable hit to his strength and other stats leaving me much weaker after the drugs wore off than I had been previously. I still feel that huge rush can be such a monumental turning point in a fight, regardless of the downsides. I want more.

There was a time when four Jet shots literally saved my life. I’d spent most of an afternoon exploring the towers and tall buildings of Boston and I’d made good ground. I stepped out onto a small grassy roof courtyard, from here I could see for miles so I thought I’d walk to the edge to make the most of this one time view. When suddenly a Legendary Deathclaw erupted from the ground rushing towards me, I thought ‘this is it’.

I panicked and looked for any answer in my Pip-Boy, at this point I was running low on my usually robust drug supply so I turned to Jet. It gave me an extra 10 seconds to think and maneuver from this ever looming drop. Quick shots from my double barrel shotgun conveniently named ‘Oops’ and buffs lasting from my previous drug spree helped me take down the Deathclaw with ease.

Being over encumbered is a bitch. In a post-apocalyptic world I see the value in everything, even junk, so nothing gets left behind. If I’m struggling to move due to my characters lack of Strength to lift it all I simply pop a buffout and my hoarding continues.

Sometimes one drug isn’t enough. When frantically scouring my Pip-Boy for aid in the most clutch of battles, sometimes you got to do them all at once to survive. That’s right! Sometimes to make it out of a tight squeeze you’ve gotten yourself into, the answer is drugs.

Heck, there’s even a perk to take advantage of the plethora of chems scattered in the wasteland.

Fallout 4 begins with your character emerging from an anti-nuclear bomb vault, Vault 111 and stumbling across a band of settlers and their town named Sanctuary. At this point is when most players choose their play-style, exploring the vast wastelands, helping the people in need or being a down right bastard.

Upon my arrival at Sanctuary, a settlement in the game that lets you essentially create your own small community, I set straight to work to creating the perfect place to call my home. At first small homes, stalls and even a bar.

I really tried to make the town live up to its name, but as I rose in levels I became increasingly aware of the ease I could get my hands on a load of chems. Using his very high charisma skill, my snake-tongued hero would charm his way to acquire what he needed from the right people. I began to build more.

Chemistry station after chemistry station, my settlement began to look like an organised meth lab, with assortments of ingredients arranged in coolers. The best thing was, I could get away with it all! Nothing in the game stops you from making caps how you like (caps being the currency used in the game). I felt like I was the wastelands Heisenberg, all I needed was my Jesse.

Strong taking part in the chemistry

Sometimes my fellow townsfolk will engage in a little shady chemistry of their own, often wandering off to a nearby Chemistry Station to create their own chemical remedy. Here’s Strong my closest companion crafting something special to take on our adventures.

With all this power you’d think that this is the way to play the game, but to roleplay a hero that only achieves what he does to get that bit closer to his next fix doesn’t make blowing that Raiders head off feel better.

The docs can only patch me up so much for the caps I have, if I don’t start to sort these addictions out soon, I’ll be broke. In the wastelands being broke isn’t the biggest of detriments but in the situation I’m in it helps to have caps.

I’ve started working on a way to come clean. There’s a cure for your addictions simply named “A Refreshing Beverage” that I’ve created in ample amounts if that side of me was to ever take hold and I was to relapse. I’m helping more people now, and my goal is unclouded.

‘When evil walks the streets of Boston, one man lurks in the shadows. Shielding the innocent, judging the guilty. That guardian is the Silver Shroud.’

With my new identity I can save the innocent and live the true hero’s life, all drug free. I am the Shroud.