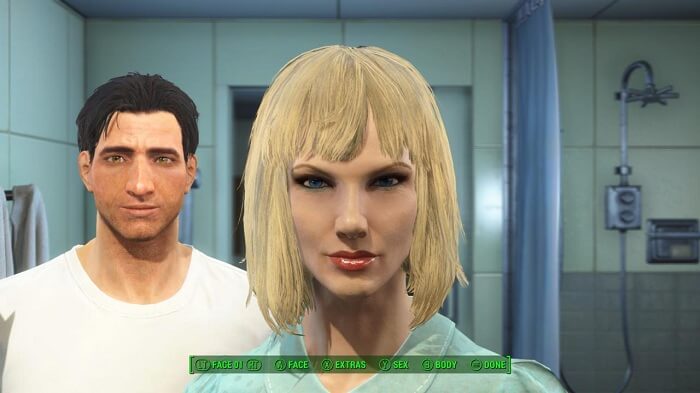 The character creating spree goes on in Fallout 4. The players have already shown their extreme dedication and skills in creating famous people as their characters using the game’s character-creation tool in the past.

Now, Kanye West, Taylor Swift, Louis C.K., and Walter White are being made to enter the wasteland.

Here are the images-

Kayne definitely looks like the real deal, that’s something anyone would agree with. The first thing that you’ll notice about him is how he is the same expression less guy even in the game like he’s in the real world.

It’s amazing how much creativity and skills the players are showcasing by accurately replicating their favorite celebs in-game.

Taylor’s look is also spot on and even she would be amused if she has a look at it. We hope she won’t sing songs to Ghouls in the game as it might not be that good of an idea. Don’t you think?

Another Imgur User fryedfish89 Brought Louis Ck To The Wasteland

Another popular character whose look has been captured exceptionally well in the game. It’s really great to see such skills being shown by the players.

Traybair Wanted Walter White To Be His Character

Breaking Bad’s icon makes his entry into Fallout 4 thanks to the character creation skills of this particular player. We must say he looks every bit like the original just all the more badass.

You should also check out another feature we did which lists all the other famous faces that we’ve found so far in the game.