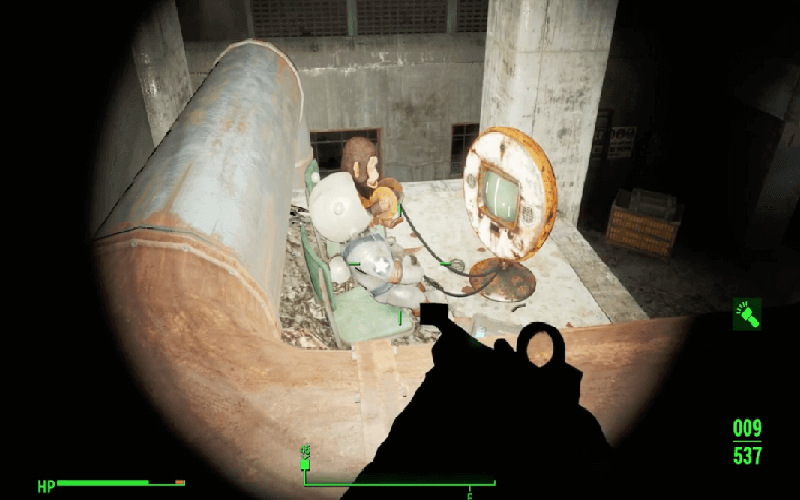 Fallout has always been about the single player experience. Always. Since 1997 when Interplay released Fallout: A Post Nuclear Role Playing Game, the series has remained single player.

It’s gone through tons of different looks, ranging from Isometric, to FPS, and of course, to mobile, it’s still maintained that core belief.Bethesda is pretty much exactly the same. They’ve never developed a multiplayer game, despite being one of the biggest developers and publishers in the world.

And no, ESO was not developed by Bethesda Game Studios, in case that popped in your head. It was developed by a Studio called Zenimax Online Studios.

So with these two famously single player oriented names in gaming, is it possible that Bethesda would go against the grain of not only their history, but also the history of arguably their most popular series?

Well, one Easter Egg found in the Automatron DLC could very well suggest just that.

Just a Jangles the moon Monkey playing a split-screen (we assume) game with one of the demonic- I mean cute monkeys that clap.. with glowing red eyes.. when they see you.

Innocent enough, but could it be suggesting more? It’s incredibly unlikely Bethesda would add a multiplayer experience into Fallout 4, but Todd Howard DID say that they were “working on 3 new projects that are different than anything they’ve ever done, while still remaining a Bethesda Game Studios game.” Read all about that here.

Interesting Todd. Could this be what he was implying, and they’re going to drop subtle hints into Fallout 4’s DLC’s? Definitely possible. Multiplayer would be new to Bethesda, so there’s the “different” part, while Fallout is still a BGS game. Would explain that quote pretty well.

In any event, a Co-op style multiplayer for Fallout wouldn’t be a bad idea, and we sure would love to give it a go. Let us know what you think on our Facebook page here!