Metacritic has crowned Capcom as the best games publisher of 2018 in recently-released stats.

The company has been rated as the best large publisher in Metacritic’s annual rankings, a massive jump from last years’ results, where the company landed fifth place.

The results come not from consumers but from critics only, with the numbers gathered from games’ average Metascore, total number of games with a score of over 90 and the percentages of positive to negative reviews.

Games publishers are split into different groups: large companies (a company that has published 12 or more titles) and mid-sized companies (ones that have released between 5 and 11).

Best selling retail games of the year so far, May update.

Nintendo and Capcom are the top publishers of the year, with 3.2m and 2m games sold respectively, nobody else is close to 1m. pic.twitter.com/t2IatXQlwl

Its most impressive title of last year was, of course, Monster Hunter: World, which currently has a Metacritic score of 90.

Despite not bringing us any new IPs in 2018, Capcom topped the ranks for large publisher with a total of 30 titles and an average Metascore of 79.3.

Second on the list is Sega, followed by EA, Nintendo, Ubisoft and Sony. Check out the results in full below. 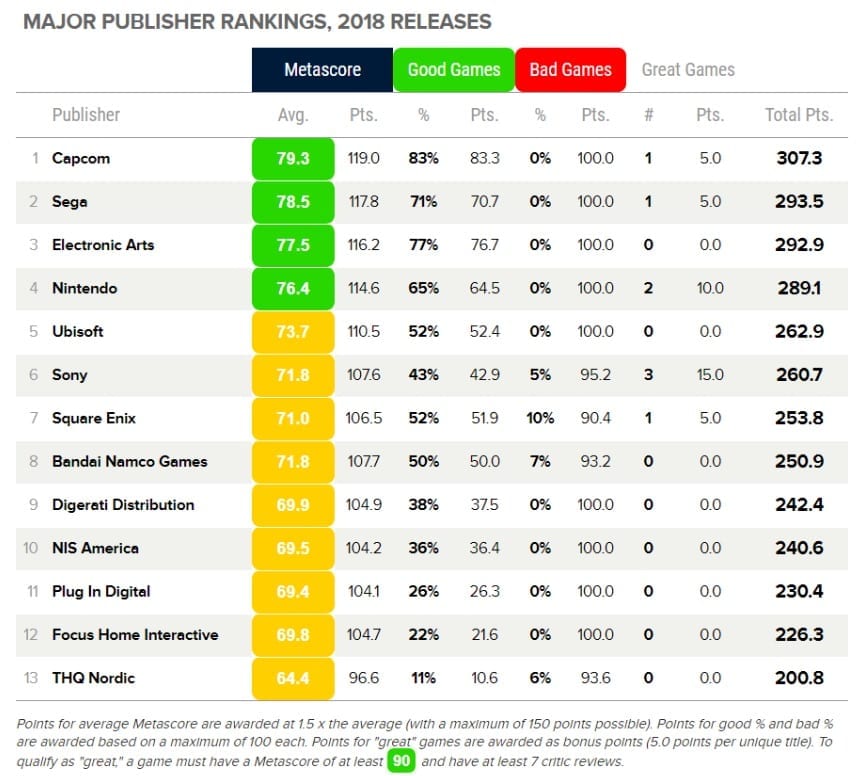 Capcom’s success doesn’t end in 2018 – people all over the world can’t get enough of its recently-released Resident Evil 2 remake. The nostalgia is jam-packed into the RE Engine, and it’s genuinely a masterclass in horror.

Do you think Capcom deserves the top spot for 2018?