One of the highlights of the EA press conference has to be the official announcement of Battlefield  Hardline. The game was shown off and revealed that a closed beta is available as a first come first server basis. This will give gamers the chance to test drive this new title right away.

What makes Battlefield Hardline stand out from the other video games within the series is that soldiers and overseas battles are replaced with cops and robbers around local big cities. Players are given the chance to play either side, law enforcement or criminals.

From the trailer, we see a group of players, a set playing as the criminals with some big loot trying to escape the city and a set within the law enforcement trying to stop the fleeing enemies. A large gunfight between the two pursue as this intense battle goes from the streets, on foot, car and even helicopter.

Currently, gamers can sign up for a beta on the PlayStation 4 and PC. 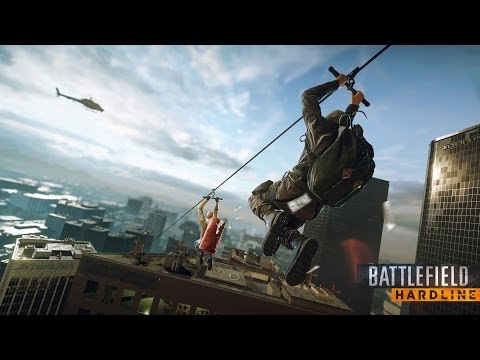