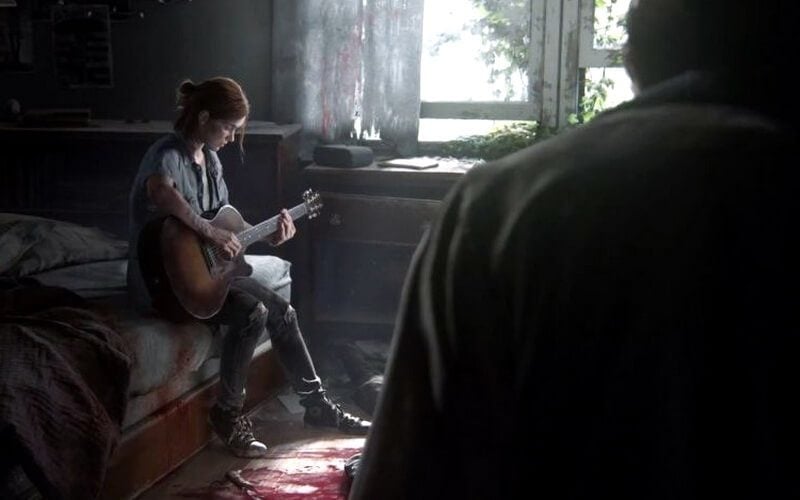 While it has been rumored for a while now, if you played the first game ‘til the end or just know Naughty Dog’s style, you’d know that The Last Of Us 2 was bound to be announced eventually.

Now, we’ve got an official confirmation that The Last Of Us is getting a sequel that follows an older Ellie, and Joel. The trailer that accompanied this announcement is only around 4 minutes long, but it’s already evident that  time has not been kind to Ellie. However, there were a few subtleties in there you may have missed:

Article may contain spoilers from The Last Of Us.

Apparently tattoo parlors are still around in post-apocalyptic worlds because Ellie has a tattoo. And by the looks of it, it’s a decent one at that.

The tattoo details some sort of plant, an herb possibly, as it doesn’t seem to have tree-like branches. It will be very interesting to see how she got that on her arm, and what it means.

So, tattoo parlours are a thing still, and apparently she’s picked up some copies of Guitar Hero 5 as well because she knows how to strum an acoustic. It’s possible that Joel has taught her how to play, or maybe she visited a music store at some point and learnt from some books (or maybe even videos).

It’s not far-fetched to say that either, because in the first game we came across a music store.

In addition, it confirms the legitimacy of the concept art that was leaked quite a while ago. It pictures Ellie with a guitar, with what I can assume to be SWAT-level fireflies approaching from the distance. Possibly she’s being hunted down so Doctors can finally make a cure.

7) Ellie is the Green Arrow now.

This continues from the previous point. If the concept art was correct about the guitar, then that can also mean it’s correct about the bow and arrow see This could mean her main weapon is a bow and arrow, which would make sense as guns are loud (even with silencers on them.)  And in case you’ve forgotten, clickers are attracted to anything that makes too much noise. Notice there’s no tattoo on her arm, however.

We can also see what is probably her Joke book from the first game. It’s possible that could be making a return.

6) The Fireflies are back.

The Fireflies are a revolutionary militia group featured in The Last of Us. Led by Marlene, their goal is the return of all branches of US government in the wake of military oppression. However, with Marlene having been killed by Joel (and many of the fireflies who already died during the game before that point) we can assume that either they have a new leader, or they operate under new (most likely, stricter) rules.

The reason we can’t assume they’re not in commission at all anymore is because a firefly logo is seen painted on a stop sign in the trailer which gives way to their return.

Ellie is 19 years old in this new trailer, and she was 14 in the first game, so there’s a 5 year gap. It’s obvious she’s been through hell and back during those 5 years, and become much more hardened.

This is Ellie then:

This is her now:

Spanning from the end of the previous point, we can piece together that killing is about as easy as buttering bread for her now. Her tone and facial expression really show that. However, even more subtly; the lyrics of the song she sings.

“I walk through the valley of the shadow of death”

She has lived through the most dangerous of situations, psychologically and physically, and has survived each one.

There is no such thing as good or evil anymore. And if there was, it wouldn’t matter to her. She’ll do what she has to when she has to.

“Because I know I’ll kill my enemies when they come.” 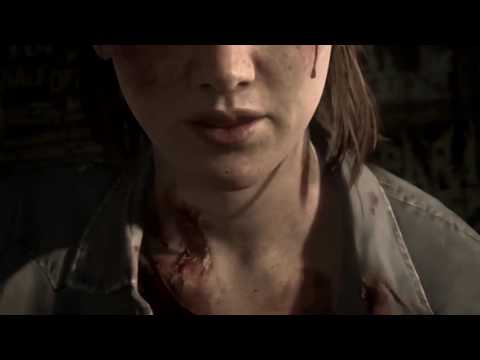 A video of her singing.

Furthermore, blood is running down her face:

The scene cuts to dead bodies and Joel walking towards her:

The bodies appear to be newly dead, as the blood reflects quite well meaning there hasn’t been enough time for blood to dry, and we can rule out rain being a factor since that would have washed the blood away entirely. It’s obvious Ellie has left a trail of dead bodies before she went to pick up that guitar, which explains her cuts and the pouring blood from her head.  There were scuffles, but she managed to kill them all.

3) Ellie is the main character.

If you compare this trailer and The Last Of Us debut trailer, they are somewhat similar. The original is introduced by a trail of dead bodies killed by Joel, with Ellie moving towards him.

A person killed by Joel with blood dripping from the dead body’s hand.

However, in The Last Of Us 2 debut trailer the roles are reversed:

Joel is seen in background approaching the dead body

Joel is on foot moving towards Ellie. This may indicate he is now a supporting character instead of main one.

This could indicate that Ellie is now the main playable character in the game and the game will focus on her more rather than Joel.

2) The infected are not the main problem anymore.

Either The Last Of Us 2 trailer is taking for granted that we already know that the infected are the problem in this world, or it’s telling us that the main problem isn’t them anymore, and is now the normal humans who have become desperate over the past few years.

There’s not one audible or visual aspect of the trailer that mentions an infected human. We do see a dead body in front of Ellie, though but appears to be a normal person.

1) Ellie has figured out something, and it involves her immunity to the Cordycep infection.

You really gonna go through with this?

Prompting Ellie to respond with:

The video of the conversation between Joel and Ellie.

Of course, the first idea that pops into mind is that Ellie is talking about the infected humans. It’s possible she’s figured out how to use her inability to get infected and to further use it to her advantage. This would mean “kill” is referring to “cure”.

Or maybe it means she’ll kill all of the fireflies and other militia that still remain? It’s possible Joel continued to lie to her. In the end of The Last Of Us, he lied to Ellie about the events that took place in the firefly base where Doctors were going to use her to make a cure, which might skew her intentions initially in the game and maybe this trailer is from early on in the game. This would lead to an interesting plot if she finds out he lied, and could pin her against Joel this time around.

It could also mean she wants every human dead, infected or not. A restart to the world maybe? Maybe her goal is to rebuild the world again? Whatever the case may be, I’m excited to find out.