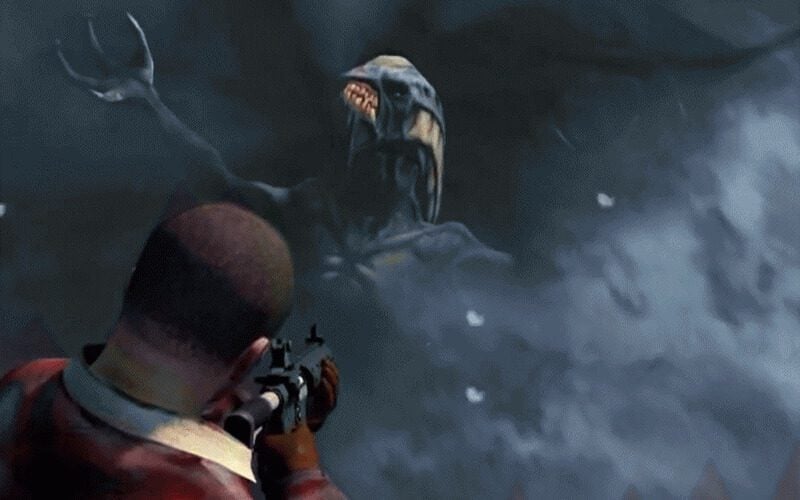 Los Santos is littered with missions, side activities, unique characters and a handful of quirky easter eggs and references, but hidden deep in the game lie a few mysteries that had us searching the darkest corners for answers. Here’s 6 GTA V mysteries that had us all doing a little mythbusting.

Zombies have become a huge part of pop culture, shambling their way into films, video games and TV shows, so it’s no surprise that zombies found a way into GTA after such commercial success.

It could be speculated that the zombie mystery in GTA V is a nod from Rockstar to the fans as there was a possible zombie sighting (which turned out to be an normal guy who walks and looks a bit funny), the Zombotech Corporation building and a graveyard with an open tomb accompanied with ominous lighting.

The references in GTA V however are much more direct,. If you take a wander into ‘creepy uncle Lester’s’ house, you can find a box near his desktop which has been labelled ‘Zombie Outbreak’. This could be seen as Lester just being his paranoid self or a possible hint at a future DLC. Furthermore, a ‘zombie’ can be found in LS. Just don’t get your hopes up, he’s just not very… zombie-ish. Not to menton, another game by Rockstar, Red Dead Redemption actually had an expansion pack featuring Zombies.

This again could be Rockstar trolling the community, but it’s been theorized that there’s a haunted house you can visit. Rockstar aren’t new to ‘hauntings’, GTA IV has us exploring the abandoned Sprunk factory for ghosts and Red Dead Redemption had the abandoned mansion in Tumbleweed. It only seems fitting they followed the trend further.

What adds substance to this particular theory, is that things only happen at night. Visiting the house during the day will uncover nothing, you’ll see the usual NPC’s doing NPC things. At night, for example, pointing a gun at a character will make them spout unintelligible things, which doesn’t sound like much as I’d probably be the same if someone shoved a .45 in my face. Backing this claim up though, if you touch a said NPC, they’ll fall to the floor dead. Legitimate haunting or just a glitch?

Another claim of spirits, in the recent update a train tunnel (previously found but never opened) can be accessed with a sticky bomb. There’s nothing much in there, all the tracks lead to a dead end, but if you follow a certain tunnel to the end and throw a molotov, you’ll see the flames morph around a human looking shape that screams and makes a bolt towards you. Creepy, but again it may just be a glitch, be it a very peculiar placed one…

GTA V fans who strive to learn as much about the game as possible, or if you’re going for the 100% completion, will know about this. The Mystery of Lenora Johnson can be read about on the in-game internet, or even heard about on the radio.

The articles tell the story of Lenora Johnson, who was brutally murdered and raped, the culprit was never caught and possibly still at large. Typing ‘who killed Lenora Johnson’ into Eyefind search will reveal a page on all the details about the murder, along with a few graphic images and political conspiracy. What makes this interesting is the fact that the murder itself resembles the Black Dahlia murder and to an extent the murder of Kay Amin, the former wife of the Ugandan ex-president.

Depending on how much you’ve explored, players can stumble across scraps of paper which ultimately will make a note, after you’ve collected 50 of them scattered throughout the world. After the tedious task at hand, players will be given the note which uncovers the murderer.

Spoilers: DO NOT READ THIS LINE —————   The murderer turns out to be Peter Dreyfuss, one of Lenora’s stalkers.

Not just speculations this time, a real ghost can be found in LS. It can be seen on top of Mount Gordo between 11 p.m and 12 a.m.

Possibly one of the most commonly seen easter eggs in GTA V, there has been a lot of theories to the ghost. In the early days it was speculated to be the ghost Lenora Johnson after hearing news reports and reading the articles. With a little digging, players concluded it is Jolene Cranley, former wife of Jock Cranley.

If players get too close to the ghost she’ll disappear, but searching atop of Mount Gordo where she stands the name ‘Jock’ can be seen written in blood. Jock was arrested but released almost immediately due to lack of evidence. Jock murdered Jolene due to the fact she wasn’t willing to move out of Blaine County to chase his dreams of becoming a movie star, so he pushed her off the mountain.

Once again this shares details with another real life murder, where on a hike to Mt. Gordon (Gordo – Gordon) a woman stabbed her boyfriend.

A common memorized cheat in previous GTA games, The jet pack has been a fan favorite since GTA 3 due to the fact it can be carried anywhere and takes no room to take off, unlike that of a plane or a helicopter. With such a wide fan base, players were surprised when the jet pack never made an appearance in the campaign, but not all hope is lost.

It may be a bit of a stab in the dark, but all players will be familiar with Mt. Chiliad. It’s the tallest mountain in the game it’s almost a gaming sin not to make it your personal mission to take a look up there at least once. Not much is up there besides a cable car station and a telescope, but Rockstar left something to get our brains working overtime. A caveman like drawing on a wall that somewhat resembles a map, complete with a jet pack symbol.

Another re-occurring trend in GTA games, the difference being that Aliens have been confirmed in GTA V, and they were right under our noses.

From the get-go, the first mission, Rockstar sneakily hid an alien away. You can see it by driving your car under the bridge instead of crossing it, getting out and looking into the frozen lake, and there it is. Just like that. Funnily enough the Aliens look very similar to the Xenomorphs from the Alien franchise.

Aliens can also been witnessed, or slaughtered, in a side quest with Micheal when he smokes something a little strange and fights them off with a minigun.

This is obviously debatable as Micheal isn’t exactly sober at the time of the encounter. And there’s the obvious case of Micheal getting drugged by his own son and shortly after getting abducted, but Micheal glides back to earth so same as before, not the best evidence. Talk about comedown.

Other references include UFO sightings once you 100% the game and collecting UFO parts that ultimately gifts you a flying car.

Mysteries such as these in a game as free and open in GTA V is truly exciting and gives us real drive outside of the campaign. We can’t wait for GTA VI (or whatever Rockstar will name the next in line) and the rich story within, although we’ll be holding that excitement for a while!

If you have any mysteries, solved or unsolved that we missed let us know, free the conspiracy theorist inside you.