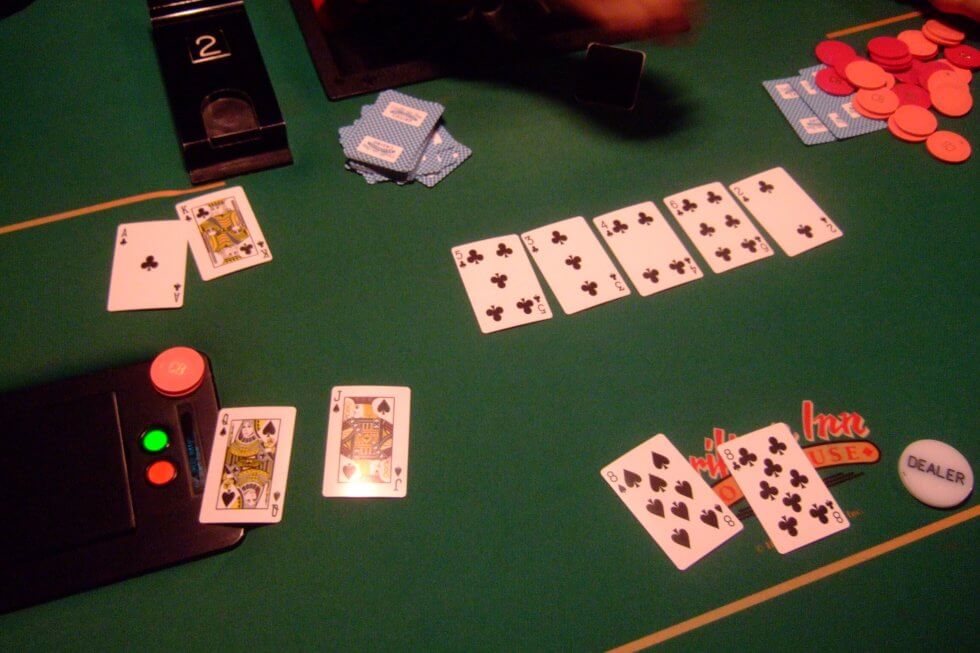 According to reports at IBTimes, an upcoming DLC pack for Grand Theft Auto V will include the long-awaited opening of the casino that players have been frustrated with since the game’s initial release. The reports claim that four mini-games will be playable inside the casino—poker, blackjack, roulette, and slots—opening up the potential for a pretty comprehensive game-within-the-game environment.

Rockstar has a history of producing some pretty fun and interesting mini-games in its GTA series, so the expectations are justifiably high. But just for fun, here are 10 things we hope they’ve thought to include before opening the casino doors.

This idea probably goes without saying, but GTA V’s casino will be vastly more enjoyable if it includes interactive poker games between players (at least in GTA Online). There are so many live poker options—even in free apps with play money—that an automated game against computer opponents would seem cheap at this point.

This may be impossible for Rockstar to pull off, but if possible, it would be a lot of fun to see some famous poker pros and celebrities walking about the casino now and then. For instance, Ben Affleck is extremely recognisable and a known poker enthusiast—why not have his likeness seated now and then at a table to add some excitement to the casino?

We’ve heard about the four expected mini-games, but it would really be great if the GTA V casino included a sports-betting component as well. Even better: what if the game could link with actual sporting news to allow fictional betting on real contests (and thus include legitimate results rather than randomized ones)?

GTA’s world is one full of conflict, and there’s no reason for that to stop once players are inside the casino. Simply put, there should be arguments, perhaps even brawls.

This is an idea popularised in part by InterCasino, the Internet’s very first high-volume casino site. While it’s tricky to imagine it in play on GTA V, it adds an air of legitimacy to blackjack and poker games. Basically, the idea is that a game includes a live feed to a dealer, as opposed to just a graphic character dishing out cards.”Live” probably wouldn’t work for GTA V. However, the more realistic the dealer simulations can be, the better the games will feel.

It’ll be a shame if the GTA V casino slot machine icons contain the traditional 7s, cherries, and whatnot, because slots already feel like the most boring of the mini-games. On the other hand, if the game can make up some fun themes and icons to have in its slots—perhaps notable images and ideas from previous GTA games past—they could be useful for some nostalgic fun.

This may be an obvious point, and it’s one that it would be shocking to see Rockstar fail to address. But in-game currency simply has to be on the line in GTA V’s casinos, in order to simulate a proper casino environment.

Similarly, there should be drinking, because it’s just part of casino culture. Most real casinos will serve free drinks to gamblers who are playing with high enough stakes, and the game should reflect this!

Actual card counting is probably way too complicated for a video game to bother with. Mental Floss has an explanation of some of the basic theories and practices of card counting and actually makes it sound relatively simple. But the truth is, designing games in a way that enables card counting would be very difficult for Rockstar. Instead, there should simply be an option to have your player attempt card counting—or any other sort of cheating, for that matter!

And finally, if there’s going to be drinking and cheating, there better be issues with security. Doesn’t it just sound like good old fashioned GTA fun to have to shake off burly security guys and bust your way out of a casino?

Most of this is pure hope and speculation at this point. But with GTA V finally appearing ready to reveal some of its most anticipated DLC content, these kinds of features would all be great to see.