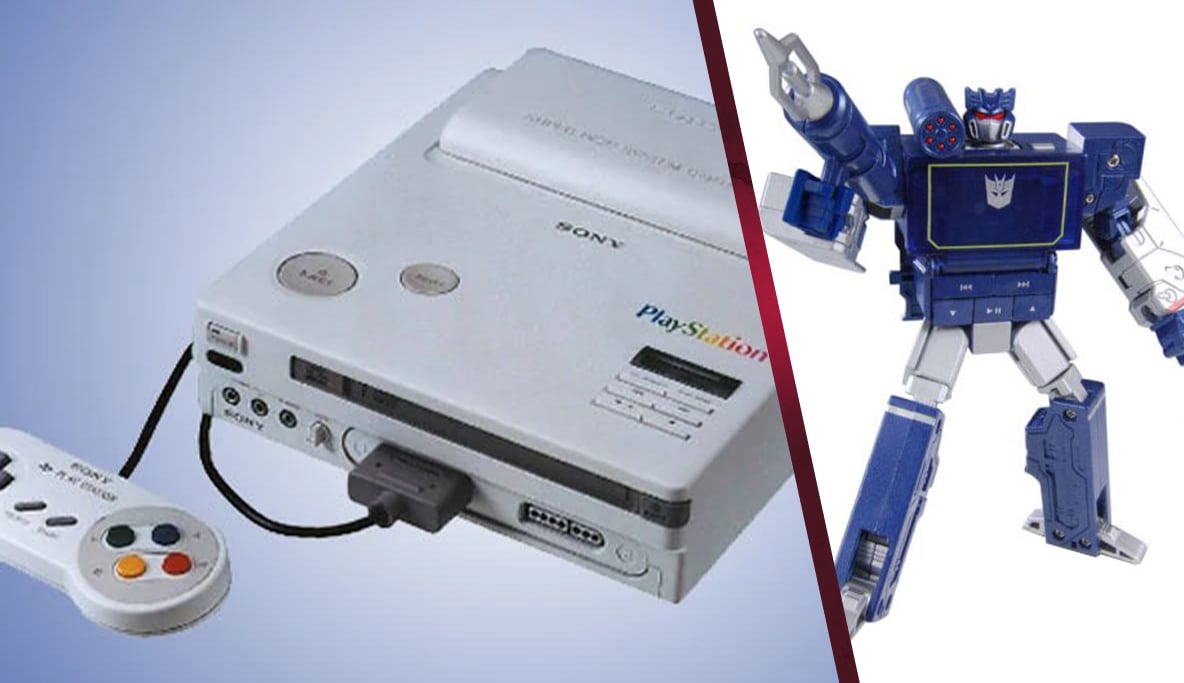 From Transformer inspired MP3 players to an incredibly Sony-Nintendo crossover, here are 10 gadgets that failed to take off.

The world of technology is often weird and wonderful, spawning ambitious concepts and equally strange ones too. While some of them manage to take off, many are quickly abandoned and forgotten about.

Join us as we revisit 10 of the coolest gadgets that never came to market.

Before Rocky 4 would show off Paulie’s strange robotic birthday gift, Genus The Robot was nearly available to consumers around the world. Developed by Robotics International Corporation of Jackson, Michigan – Genus The Robot was touted to be capable of entertainment, security, personal assistance and speaking. A concept too strange for the time it seems, as Genus The Robot has never been seen again.

The Pebble Smartwatch campaign was the most-funded Kickstarter project at the height of its popularity. Before Apple and Samsung would define the capabilities of the Smartwatch, the Pebble attempted to get their first. However, the project struggled to make a dent and its technology assets were later sold off to Fitbit.

After consuming a large meal, loosing our belt is a necessary part of feeling comfortable. If you simply couldn’t be bothered to do it manually, then Smart-Belt, Belty, would link with your phone to adjust itself in a hands-free manner. The belt could contract and loosen depending on your posture too, but you’ll never get to experience it, as Belty has faded into obscurity.

Forget using your controller for gaming, Atari had wilder thoughts…literally. The Atari Mindlink was supposedly capable of allowing gamers to play simple games with their, well, mind. The bizarre console was supposed to release in 1985, but alas, Atari quietly discarded this idea before then.

Cutting edge technology doesn’t get more advanced that the notion of an cell phone with shaving capabilities. Manufactured by Tondemoketai China, this strange combination of personal grooming and connectivity never took off. However, the phone was capable of a “Full Shave” if it was charged up enough. We don’t think this idea will be resurrected anytime soon.

Do you love Transformers and listening to music? Perfect! While you can’t get your hands on the Soundwave MP3 player, this was an interesting attempt to tap into the booming music market consumed by the iPod. It even held an SD card on-board, while boasting the ability to literally transform. On this occasion, the AutoBots won’t be rolling out though.

Smartphones from brands like Huawei, Apple and Google have pushed the limits of portable photography but Polaroid tried to branch out into unseen avenues. Announced in 2011, the GL20 Sunglass Camera looked like something straight out of Tron: Legacy, merging fashion and technology together. Inspired by the likes of Lady Gaga (yes, that’s right), these ambitious glasses have yet to hit the market.

Between AirPods, Apple Watches and iPhones, there are just so many devices to keep charged up all at once. We’re scrambling for plug sockets before bed to keep those gadgets going. Apple recognised this problem back in 2017 but the Apple AirPower charging mat will never be seen in an Apple Store. The company stated in 2019 that development on the product had ceased, so for now, keep those plug sockets free.

If you’re an avid PC gamer than you’ve undoubtedly purchased a brilliant monitor to enhance your experience. What about PC gamers that are on the go begging for more screen space? Razor Project Valerie sought out to give their laptop line-up an injection of serious screen space, by adding three 4K displays to one single unit. The stunning creation hasn’t been released just yet, but Razor haven’t declared the project dead either.

Before the consoles wars of modern day would cause fiery debate around the world, Nintendo and Sony did try to collaborate on a console together. The Super NES CD-Rom merged the brilliance of PlayStation One and NES, with the two tech companies revealing a prototype in 1991. Only a few hundred test models made it out of the factory, with some of them going for insane prices, if you’re lucky enough to acquire one. While its unlikely a crossover like this would happen today, we can always dream.